The tag line for this installment of the Harry Potter series has been “It Ends Here” and that it does. 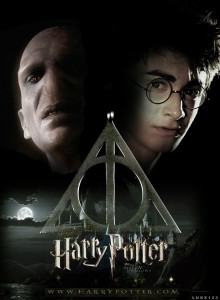 I realize that most of Â you reading are probably fans of Harry Potter and my guess would be that you have read the books. Â So, I am not going to go into detail covering the plot line as I normally would.

The build up for this movie as been huge. Â Part 1 left us hanging with the death of Dobby and Voldermort searching out the Elder wand. Â Part 2 opens with Voldermort opening the tomb of Professor Dumbledore to get the Elder wand. Â The movie does not waste time recapping what happened in part one, they get right to the action of the movie. Â I was surprised, but pleased, that the director did not waste time recapping Part 1 at the beginning of Part 2.

Again the special effects and theÂ imageryÂ are amazing in this film. Â We did see this movie in 3D but I do not think it isÂ necessarilyÂ to see in 3D. Â Honestly I cannot wait for the movie to be released on BluRay, it will be a GREAT HD movie at home.

By far the most impressive part of this movie is the big battle scenes when Voldemort and his army are trying to take over Hogwarts Castle. Â TheÂ preparationÂ of the castle by Hogwarts staff and the Order gave me goosebumps. Â Professor McGonagall casts a spell that brings the stone carved guards of the castle to life, and once the guards come to life McGonagall says “I’ve always wanted to do that” in a playful way, it got a laugh from the crowd. Â The actors did a great job portraying that they were getting ready for a battle that most of them would not survive, but they were protecting what they loved. 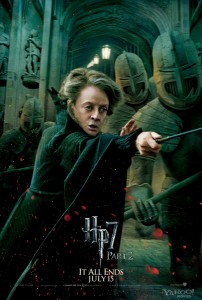 The movie did stay true to the book for the majority of the film however did change a few aspects of the final battles. Â The battle between Mrs. Weasley and Bellatrix Lestrange is not as drawn out as in the book, but Mrs Weasley does call Lestrange a bitch. Â Also, the timing and location of Neville Â killing Nagini is different than the book.

My onlyÂ disappointment was the scene at the end when the main characters are sending their children of to Hogwarts. Â I read that they used a good bit of CGI to make Harry et al look older in this scene, and you could tell. Â The effects did not look as good as the rest of the movie.

Overall fans of the Harry Potter series will not be disappointed by this film, they will love it. Â People who have not read the book or did not see Part 1 need to do themselves a favor and either read the book or see Part 1 before seeing this movie to truly enjoy the story.