To put it simply Friends with Benefits is a “chick flick”. Â This movie follows the simple plot line girl meets guy, they have sex, girl gets mad at guy, guy wins girls heart back and they live happily ever after. 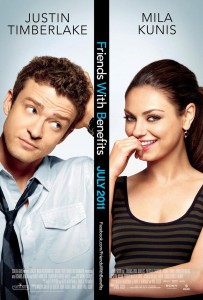 Dylan (Justin Timberlake)Â is a sought after art director for a independant fashion website. Â Jamie (Mila Kunis) is the head hunter hired to bring Dylan to New York City for an interview with GQ magazine. Â After his interview Jamie shows Dylan around NYC. Â He is from LA and acts like a lost puppy on the streets of NYC. Â Soon after Dylan starts his new job he and Jamie start hanging out and soon realize that they both want sexual relationships without the emotional aspects. Â After some time of having encounters they urge each other to start dating again. Â This is when they realize that they really do have feelings for each other.

Dylan left his dad (Richard Jenkins), sister (Jenna Elfman), and nephew (Nolan Gould) in LA. Â His sister is caring for their dad who is suffering from Alzheimer’s. Â Dylan and Jamie take a trip to visit his family in LA over the July 4th Holiday and this is when things get sticky.

One really bright spot in this movie is the acting byÂ Woody HarrelsonÂ who plays Tommy the Gay Sports Director at GQ. Â He has some really funny one liners and really adds some comedy to the movie.

I had two big issues with this movie. Â The first is Dylan was a unassuming doe eyed person being in NYC for the first time. Â I had a VERY hard time seeing Justin Timberlake play this role. Â My second issue is that the movie (as with most chick flicks) is rather predictable. Â My wife and I both predicted a scene at the end of the movie well before it took place.

There are some very strong sexual scenes in this movie. Â There is some nudity, but the most you see is Justin Timberlakes ass, and Mila Kunis’ ass (for a split second).

Overall I would give this movie 2 out of 5 slices of bacon. Â Go see this movie if you are out of things to see in the theater.