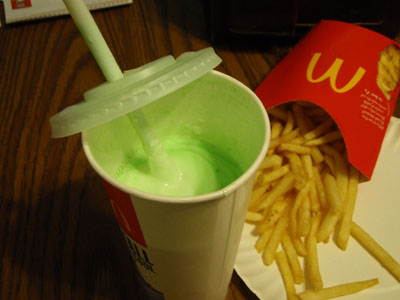 As far back as I can remember, McDonald’s has been serving the Shamrock Shake during March. It’s obviously a nod to St. Patrick’s Day. I look forward to it every year. It’s basically a green vanilla shake with a hint of mint.

The picture above is from 2008. McDonald’s introduced the McCafe beverages in their restaurants at the end of 2009. Since then their shakes included whipped cream and a cherry.

This is the earliest commercial I could find online. The Shamrock Shake was introduced in 1970.

Uncle O’Grimacey became a common McDonaldland commercial starting in 1977. He was Grimace’s uncle and would arrive in March to sell Shamrock Shakes. Don’t ask me where he was the rest of the year. 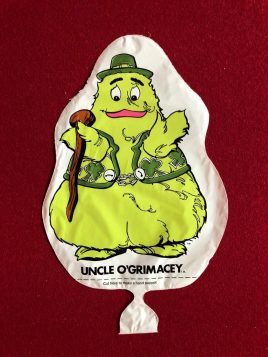 He was seen on several McDonaldland merchandise in the late 70s and 80s. And then he wasn’t heard from ever again.

In 1980 they tried their luck with a Shamrock Sundae as well. Apparently, it did so poorly, they didn’t even attempt to try to bring it back again.

I found this commercial, but it almost appears to be a local area commercial instead of a national McDonald’s commercial.

This is the latest incarnation of the Shamrock Shake, complete with Whipped Cream and a Cherry.

This shake comes back every year, just like the McRib. So, don’t miss out, get it while you can!