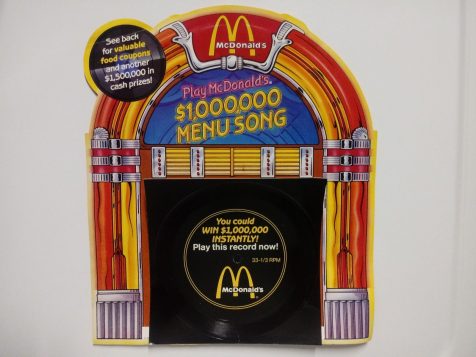 The year was 1988. Our Sunday St. Louis Post Dispatch Newspaper arrived. Normally, I’d check out the funnies and look at the toy sections of the ads for things that I wanted. This morning was different. There was a cardboard record attached to a McDonalds promo Ad. A Free Record? This was unheard of! In fact, I never saw a record printed on cardboard before this.

The US Menu Song

The concept for this promotion was simple. If the people singing on your record sang the McDonald’s Menu song all the way through, you would win a Million Dollars. Unfortunately, There was 80 million of these things distributed, and a woman in Virginia won the grand prize. 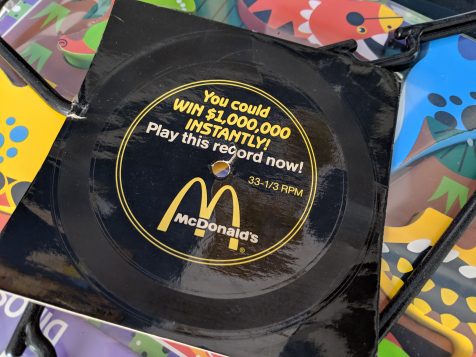 The record was super flimsy. If you didn’t set a weight (a coin or bottle cap) on the edge of the record the needle would spin the record in the wrong direction. Over 30 years later, I still have my cardboard record. It looks a little rough, but it does still play. However, my record player is missing a rubber gasket, so it won’t spin anymore.

It all started with these commercials airing on TV. It was such a ridiculous thing for someone to list every item on the McDonald’s menu. Then, we got our own copy of the song. Now I can play the thing over and over and memorize the thing myself. I never once went to a McDonald’s and sang the menu song to the cashier. However, I’m sure several people did. Every McDonald’s employee at that time had to of been annoyed with it.

Employee – “Hi, Welcome to McDonald’s, Can I take your Order”.
Customer – “Yes, I’ll have a Big Mac, MCDLT, A quarter pounder with some cheese……”
Employee – “How clever! I’ve never heard that one before! HAHAHAHAHAHHAHAHAHHA!”

The song is actually a parody of a 1974 hit, “Life is a Rock(But the Radio Rolled Me)” by Reunion. I never really heard it. It did hit the billboard charts.

So, I’m sure you’re wondering the lyrics. Well, here they are:

Big Mac, McDLT, a Quarter-Pounder with some cheese,
Filet-O-Fish, a hamburger, a cheeseburger, a Happy Meal.
McNuggets, tasty golden french fries, regular or larger size,
salads: chef or garden, or a chicken salad oriental.
Big Big Breakfast, Egg McMuffin, hot hot cakes, and sausage.
Maybe biscuits, bacon, egg and cheese, a sausage, danish, hash browns too.
And for dessert hot apple pies, and sundaes three varieties,
a soft-serve cone, three kinds of shakes, and chocolatey chip cookies.
And to drink a Coca-Cola, Diet Coke, and orange drink, A Sprite
and coffee, decaf too, A lowfat milk, also an orange juice.
I love McDonald’s, good time great taste,
and I get this all at one place…

Once I started doing research for this article, I found out that there were different versions of the Menu Song for different Countries. Here’s the Canadian version:

Big Mac, McDLT, a Quarter-Pounder with cheese, Filet-O-Fish, a hamburger, a cheeseburger, McChicken, and McNuggets, tasty golden french fries, regular or larger size, and salads: chef or garden, or a chicken salad oriental, and for breakfast: Egg McMuffin, hot hot cakes, and sausage. Maybe Omelette McMuffins all 3 kinds of danish, hash browns too. And for dessert hot apple pies, and sundaes three varieties, a soft-serve cone, three kinds of shakes, and chocolatey chip cookies. And to drink a Coca-Cola, Diet Coke, and orange drink, A Sprite and coffee and hot chocolate, also apple, orange, and grapefruit juice. I love McDonald’s, good time great taste, and I get this all at one place

One of the recognizable items on this list is the McChicken. The US had the McChicken in the 80s, then was discontinued when the Chicken McNuggets were released. This eventually came back, which became one of my “go to” dollar menu sandwiches for a long time. There’s also something called a “Omelette McMuffin” and grapefruit juice.

The Australian version of the Menu song is a more condensed version. The one item on this menu I’ve never heard of is McFeast. Also include is Marmalade.

I’ll have a Big Mac, Quarter Pounder, Filet of Fish, McFeast as well, a junior burger and cheese burger, Chicken Mcnuggets 6 or 9 with 4 delicious sauces and some golden french fries fries small and large, to drink I’ll have an orange juice, no Coke, no make that Diet Coke, Fanta, Sprite, three kinds of shake, chocolate strawberry or vanilla, coffee, tea, hot apple pie, cookies and three different sundaes hot choc fudge, hot caramel or maybe strawberry, yeah my favorite, maybe breakfast hashbrowns, english muffins, jam and marmalade, a sausage and Egg Mcmuffin please, plus hotcakes with some maple syrup, Bacon Egg Mcmuffin plus big breakfast or some scrambled eggs, I love Mcdonalds, good time, great taste, and i get this all at one place

Do you remember the Menu song? Let me know in the comments below.