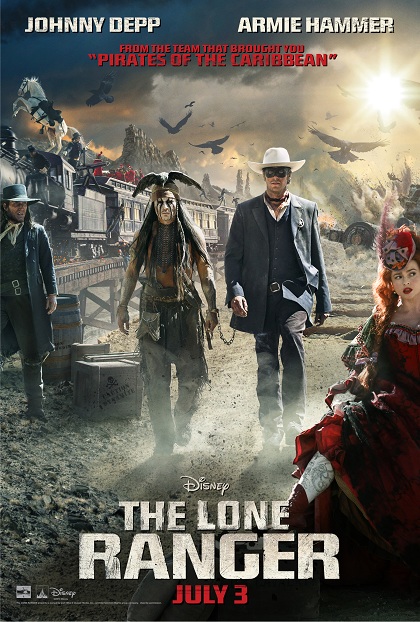 So, Hollywood is known for recycling old franchises and putting them out as big budget movies. Today, they bring new life to “The Lone Ranger”. The only previous knowledge I had of the Lone Ranger was from the black & white tv show, that was playing in re-runs in the 80s when I was a kid. Back then, I thought it was kind of lame, but it was better than anything else that was on at 6 in the morning on a Sunday.

So, in the movie, we are introduced to an elderly Tonto, who tells a little kid about his adventures with the Lone Ranger; We first see Tonto chained up in a prison train car. Next to him is wanted criminal, Butch Cavendish. Cavendish is being taken into town to be hanged. Also on the train, in a passenger car is John Reid, a lawyer going back to his hometown to reunite with his brother, Dan. Suddenly, a gang on horses hop aboard the train, and release Cavendish. At this time John tries to intervene but only ends up chained to Tonto. Cavendish and his gang get away, leaving Tonto and John crashing with the train and somehow surviving.

John gets home and talks to his brother, Dan about Cavendish and his gang. Dan gets a posse together to find and hunt down Cavendish. He deputizes John and makes him a Ranger by giving him their dad’s old badge. The posse goes out in search of the Cavendish gang, but ends up getting ambushed. All of them are dead, or are they? 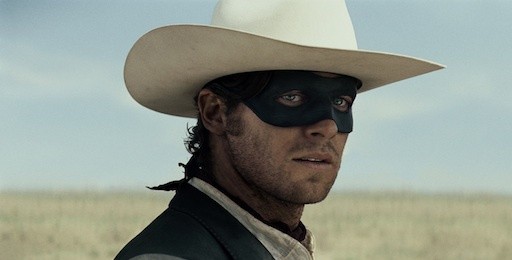 Tonto finds all the bodies, and buries them. Suddenly, the “spirit horse” (which is basically a white horse) chooses John Reid. John Reid awakens from his “death” to find Tonto’s campsite. Tonto convinces him to go after Cavendish, and that he must wear a mask. Will John (The Lone Ranger) and Tonto find Cavendish and bring him to justice? 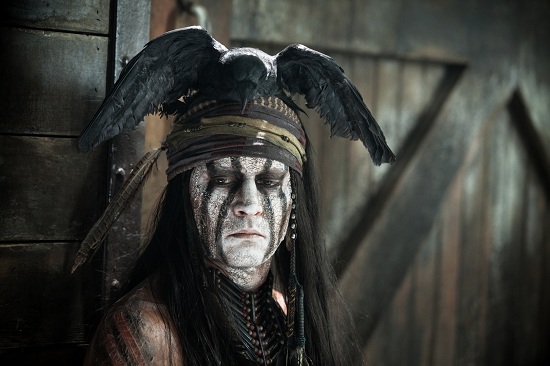 This is one of those movies that I really wasn’t looking forward to seeing. I’m not a big fan of the “Pirates” movies and this just looked like another one of those. But, I was pleasantly surprised. Sure, this movie is long, about 2 1/2 hours, but that’s normal for this team. This is a fun movie and doesn’t take itself quite seriously. It’s actually pretty funny in spots, and I hate to admit it, but I actually thought Johnny Depp played a great Tonto. 3.5 out of 5

0 thoughts on “The Lone Ranger – Review”