The fourth installment of the Bourne series is release this weekend, The Bourne Legacy. Â I really enjoyed the first three Bourne movies, and was very excited to see this latest movie. 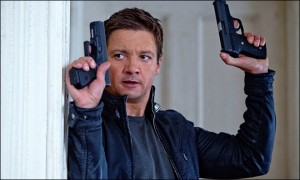 The main character in The Bourne Legacy is Aaron Cross (Jeremy Renner). Â He is s similar to Jason Bourne in the fact that his DNA has been altered by a covert group inside the USA Government. Â The begining of the movie parralels Bourne Ultimatum in time. Â Cross is finishing his training at the same time that Bourne is returning to NYC and causing Havoc. Â Since news of Bourne starts to leak out the covert group starts to terminate all of the other “experiments” like Cross. Â Cross survives an air strike by a Predator Drone, and decides he needs to figure out what is really going on.

At the same time that Cross survives the Drone attack the covert group is killing off all witnesses to the program including the scientists that helped create the drugs that altered Cross and his group. Â The covert group tries it’s best to leave no witnesses. Â The rest of the movie details Cross and his efforts to stay alive and keep his altered abilities.

Like I said, I really enjoyed the first three Bourne movies, but not this one. Â One of the hallmarks of a Bourne movie are the action and fight scenes, and this movie came up short. Â There were a few fight scenes but I was left wanting more. Â The story line was difficult to follow in the first 45 minutes of the film as well. Â It took a while for us to figure out that the timeline was parralleling Bourne Ultimatum. Â Unfortunatly the ending was quick and left us wanting more as well. Â I felt like they chopped off the ending and could have gone a bit more into what happens.

However I thought Renner did a great job playing a genetic altered killing machine, he played the part very well. Â I also thought that Edward Norton played a great role as well. Â Norton has ability in this movie to play a GREAT jackass. 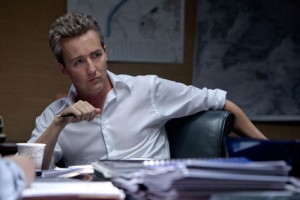 Overall, I felt this movie was a let down, not a Legacy for the Bourne franchise.