Today, I’ll be starting a new feature for the next couple of months. You see, I walked into K-Mart a couple days ago and I noticed this:

Yes, the stores have dictated that the Halloween season has now begun. Although, it isn’t even Labor Day yet, I’m going to be doing a countdown of sorts. Like most other blogs I follow around this time of year, I’m excited about Halloween. I’m not going to say I’m an innovator, but, what the hell. I’m doing a semi-daily Halloween countdown. Maybe I’ll have something exciting for you. 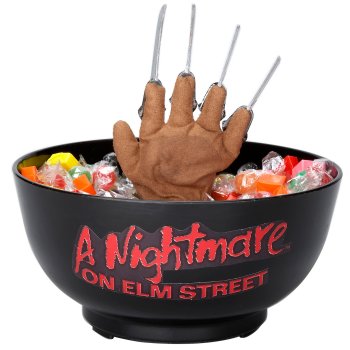 Today’s Halloween related item is the Freddy Krueger Candy Bowl. You’ve seen several of these candy bowls that grab your hand when you reach for a piece of candy. Well, finally they’ve come out with a new version with Freddy’s patented glove with razor blades. Surprise your friends by removing the fake plastic blades with real sharp blades. That’ll keep ’em from trying to take your candy again. 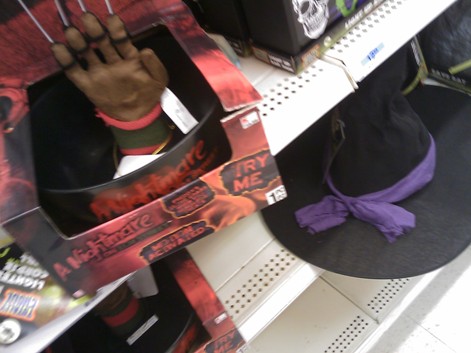 Freddy says 3 different phrases: “I’m Gonna Scratch You In Two!”, “Welcome To My Nightmare!”, and “Come On, Freddie See’s You!”. Shouldn’t the second phrase be “Welcome to Your Nightmare”? I mean, Freddy’s nightmare is probably more along the lines of the Snuggle Bear shrinking his sweater in the laundry.

I’m not sure if the voice is the orginal Freddy, Robert Englund; the new Freddy in the upcoming reboot of Nightmare on Elm Street; or just some generic voiceover guy. Either way, it’s pretty nifty. I found it for $15 bucks at K-Mart. But, you may be able to find it cheaper somewhere else.

One thought on “59 Days Until Halloween: Freddy Krueger Candy Bowl”