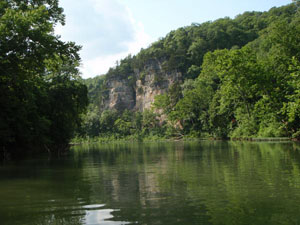 I went on a float trip this weekend. We went to Blue Springs Ranch Resort. It was a nice place. Of course as soon as we got there on Friday it was pouring down rain. Seems like a new tradition for us to put our tents up in the rain.

So, Saturday we floated down the Meremac River. I had a pretty good time. But there were a few issues:

Issue #1: We had 60 beers to split among 4 people. That should have been plenty. But, we ran out before the end of our float. We relied on the kindness of strangers. We were given 4 Busch’s & 4 Bud Selects. Beggars can’t be choosers I guess. But, for some reason, all the beer we drank didn’t effect us. Even the 8 or so Jello Shots I did, didn’t do anything. We must have a high tolerance or something. 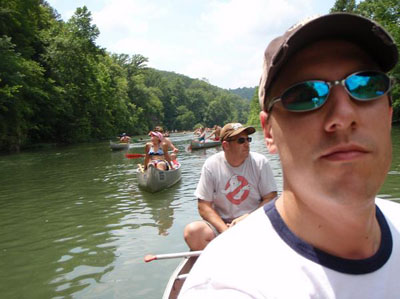 Issue #2: The float was a 10 mile float! I don’t mind floating. But, that’s a long freaking way. Even in a canoe where you can choose your own speed, it takes almost the whole day to get to the end. We got on the river about 12:30pm. We had to get to the end by 6:30pm to get picked up by the bus. I would of rather went on a 5 or 6 mile float and had the same amount of time. Then we wouldn’t of had to paddle quickly ahead.

Issue #3: People start to annoy me after awhile. Here’s the deal, I’m totally white. I had no tan at all. Well, a few days before we left, Jeff suggested we go tanning to get some color, so we wouldn’t burn. Well, anyway, it was a bad idea. I got burnt, Jeff got burnt, too. By Saturday when we were floating, I wasn’t hurting anymore, but I was still red. So, when I took off my shirt everyone would offer me sunscreen. They would say “Hey, you should put on sunscreen!”, “You’re going to feel that in the morning”, etc… I heard it all. It just got annoying that people wouldn’t just mind their own business. So, I just put my shirt on the whole way. problem solved….

All in all.. it was a good time. I am thinking about getting rafts next time instead of canoes. We only tipped the canoe once, but I gotta a freakin nasty bruise on my arm from trying to stop the canoe from tipping.

Anyway… I should have some new articles up later this week…

One thought on “Another Float Trip…”