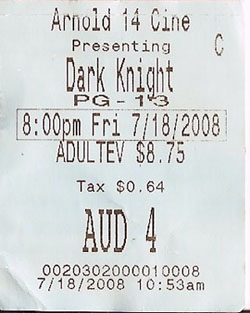 Well, the movie I’ve been waiting what seems forever is finally here. The Dark Knight finally opened in theaters last night and I was there. Batman has probably always been my favorite comic book character. I mean, really, he’s just a regular guy. He has no super powers, can’t fly, can’t talk to animals, etc. He’s just as vulnerable as you and me. (unless you have super powers)

I don’t know if I’ll really give away anything from the movie, but I might as well say this: Spoiler Alert! If you haven’t seen the movie yet, don’t read on. If you did, click below to read more

First thing about TDK is the intro. No 12 minute intro!!! Hooray!! I simply can’t stand how Spiderman starts out with a long ass intro full of credits. TDK simply shows a Bat Symbol, and boom, we’re in the movie. Batman Begins did the same thing. In fact, the title doesn’t show up on the screen until the Ending Credits. Maybe it’s just a Pet Peeve of mine.

Anyway, the best part about this movie is Heath Ledger. Anyone who sees this movie has got to agree that he played the Joker brilliantly. From the beginning bank job, He plays a smart lunatic. My favorite line was him showing a “magic trick”. “Watch, as I make this pencil, disappear!”, Then he literally slams a guys head through the pencil. Holy crap, he was creepy. He loved to torture people and it showed. Heath played it exactly like a person would who had cuts & scars on his lips and face. He was always licking at them.

It’s just so sad that Ledger is dead. He can totally come back in the next of the Batman series. I mean Cillian Murphy came back to play his role as The Scarecrow. It totally blew me away that Scarecrow was still on the streets.

Harvey Dent / Two-Face was great! I thought that we’d only see him become Two Face and that’s all. Two Face was awesome looking! Props on the CGI / Makeup guys for that effect. Oh, did anyone else think that Batman was going after Harvey Dent instead of Rachel? That blew my mind!

Speaking of Rachel Dawes. To me, they needed a much hotter chick for Bruce to be going after. I mean, he comes off his private Copter with 3 supermodels. I didn’t think Maggie Gyllenhaal (yes, I had to look up the spelling) played the role bad or anything. But, it’s just not the hottest chick. But, I guess it’s the same with Spiderman. Hey, at least Iron Man is after a better looking chick like Gwyneth Paltrow. But, I don’t work in Hollywood, so what do I know. Oh, and is it true that Tom Cruise didn’t want Katie Holmes to do the Dark Knight. I mean, that really sucks for her. She could of had a huge payday. But, I guess they have tons of money.

Christian Bale played Batman / Bruce Wayne perfectly as well. But, I guess he was kind of overshadowed by the Joker. Every Good Superhero movie is dependent on how great their Villain is. My only problem with Batman, is the same problem I had from Batman Begins. Anytime his in the Batman costume he’s talking in a raspy voice. I understand he has to disguise his voice so people don’t know it’s Bruce Wayne, but it does tend to get annoying.

One other thing about the movie, not really a complaint, but an observation. Did anyone else think the movie was about to wrap up and be over, then it continued for another hour!? It was a long movie, but not in a bad way, in a good way. You wanted more, more, more!!!

I’m going to have to say that this movie is definitely on top of my list of movies. It is so great! Anyone have a suggestion for a villian in the next Batman movie?? I’ve always been a Riddler fan. But, the good thing about Batman is he has so many cool villians! I mean, how many times, in the comics, has the Joker visited Metropolis to fuck with Superman? At least a half dozen times.

One thought on “The Dark Knight Review”