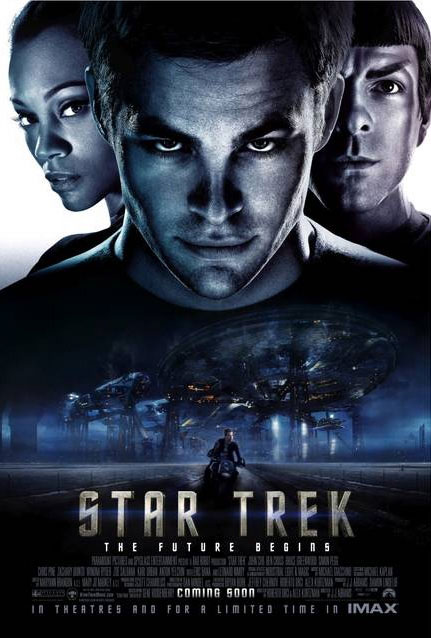 I’ve never been a huge fan of the “Star Trek” franchise. If someone were to ask me which I liked better, Star Trek or Star Wars, I would without question answer “Star Wars”. I never really liked the original series, except for the one where Kirk fights the evil Lizard People (I caught that one on the tv while drinking at a bar). I enjoyed a few of the movies. Star Trek II was great. Also, I may be one of the only ones that enjoyed Star Trek 4. Although, most of the part 4 took place on Earth in the 80s, looking for a whale, instead of aboard the Enterprise in Space. After the original movies, I never watched The Next Generation or any of the other Star Trek TV series. So, in other words, I’m in no way a Trekkie or a Trekker (which is apparently what they like to be called now).

Something about the hype of the movie, got me excited to see this movie. And, I wasn’t disappointed. This is a movie for Fans of the series, and people who don’t know a thing about Star Trek. It tells the origin story of each character. It’s really hard to explain the movie without ruining it, but I’ll try. Spock, the original Spock, Leonard Nemoy, accidentally created a black hole, when back in time, creating an alternate universe. Everything that was suppose to happen, in the original Star Trek series, will not happen because of one thing Spock did. So, Kirk has a life changing event when he is born & young Spock has to deal with his human emotions from his human side of his half human / half vulcan upbringing.

The whole movie is cast great. I didn’t see a flaw in the cast choosing. Chris Pine played a badass as Kirk. Zacharcy Quinto was great as spock, playing him like the emotionless character a vulcan should be. My personal favorite was Simon Pegg as Scotty. You may know him as Shaun from “Shaun of the Dead”. He’s a funny guy.

This is definitely the best Star Trek has looked. The story, the fights, the special effects, were all great. Also, look for the hot green chick, and of course, Ahura, who is played by the very hot, Zoe Saldana. Anyway, this movie, definitely gets my seal of approval.