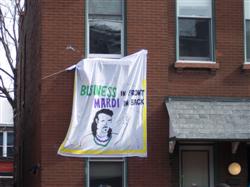 I’ve got a new article for you today. It’s a recap of the Soulard Mardi Gras. For those of you who have never heard of it. It’s the 2nd largest in the country, right after New Orleans. Anyway, it’s the St. Louis Mardi Gras Celebration. Check it out. 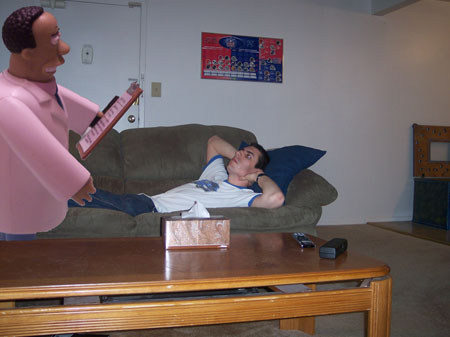 DR. HIBBERT: Why are you so depressed, Greg?

GREG: Why would I tell you? You’re not a psychiatrist.

DR. HIBBERT: I’m the closest thing here to a shrink, unless you’d rather talk to Dr. Dre. And to tell the truth, I don’t even think he’s a real doctor.

GREG: Fine, well it all started back a couple weeks ago at Mardi Gras.. 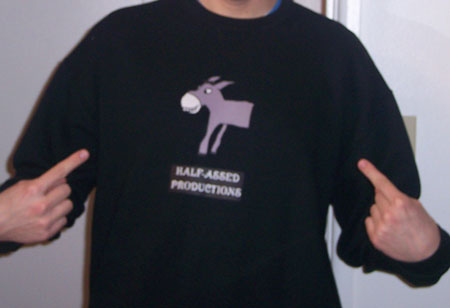 GREG: I had just finished creating a new shirt to advertise my website. It was pretty spiffy. It’s all original art. When I showed it to all my friends. They asked where their shirts were. I had only made one, and didn’t have enough money to create anymore at the time.

DR. HIBBERT: So, thats the reason you’re depressed, huh? You didn’t have enough money to make all your friends half-assed productions shirts. 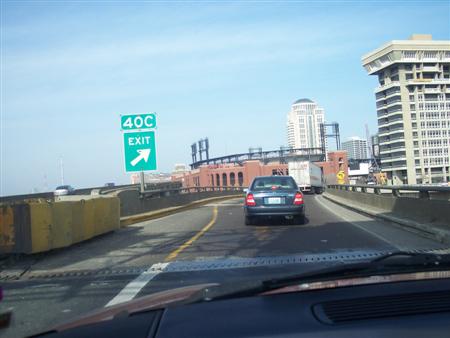 GREG: So, I met my friends at a gas station, and we both had to drive to Illinois. You see this was kind of out of the way. I live about 10 minutes from downtown St. Louis, but, I had to follow my friends over to Illinois. They had to drop their daughter off with their babysitter. So, we kind of went out of the way. We drove from the East side back over and into Soulard where the Mardi Gras celebration was taking place.

DR. HIBBERT: So, this depressed you because you could of gotten there earlier. I see, you missed some of the festivities and you’re upset because of that. 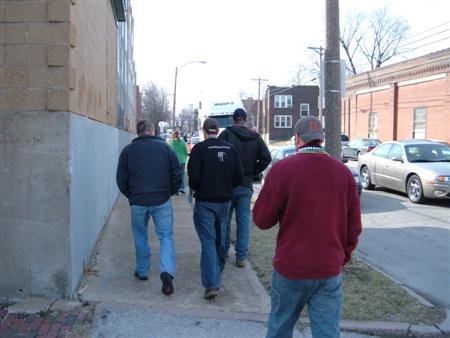 GREG: We had to park pretty far away. Since the New Orleans Mardi Gras wasn’t going to be as big this year, I figured there would be more people there. But, we had to walk about a mile from the car to where the party was.

DR. HIBBERT: So, this had you feeling blue, parking a mile away is a pain. I remember during Christmas having to park far away to go shopping at the mall.

GREG: Actually, the walk didn’t bother me at all 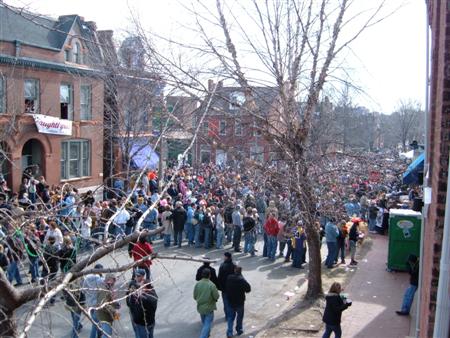 GREG: We got to the house where we were staying. They told us that for $20 bucks a person, we could have all the beer we wanted to drink & all we can eat. Plus, we’ always have a place to go that’s warm with a clean bathroom, instead of using a Johnny on the Spot. We’d get wristbands, so we can come and go as we please.
This would have been a great. But, when we got there, they suddenly said it was going to be $30 bucks a person. That’s 10 more bucks I had to spend, that I really didn’t want to spend

DR. HIBBERT: So, you’re feeling crummy because of the extra 10 bucks you had to spend.

GREG: Well, not really. I was upset at the time, but I got over it. 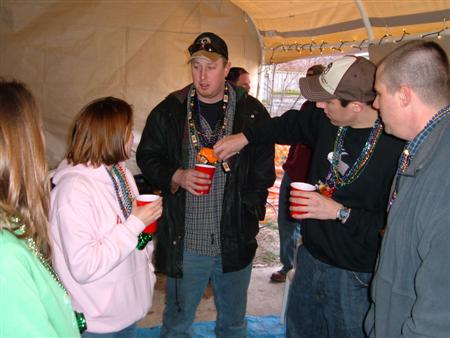 GREG: I was just getting over getting strep throat. So, I was on antibiotics. Technically, the doctor’s orders were not to drink any alcohol. I talked to the pharmacist at my work. He said it’d be okay to drink a few. But, no more than 3. So, I really didn’t get to drink that much. Not, like I’m a huge drinker, but I did spend 30 bucks. Beers out on the street were about 10 bucks a beer, and they were much bigger.

DR. HIBBERT: So, you figured you didn’t get your money’s worth. So, this got you feeling down.

GREG: No, not really, because I was driving, so I didn’t want to drink that much anyway. 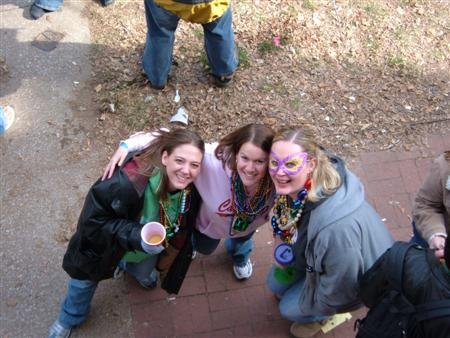 GREG: The view was pretty cool. It was the first time I was at Mardi Gras, and I actually got to go up in one of the windows. 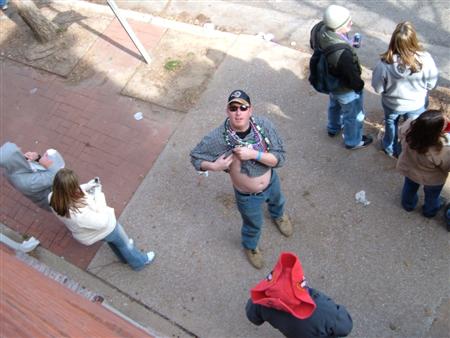 GREG: You see a lot of crazy stuff happens in the second story windows. It usually goes both ways. The people from the second story offer beads. And you get flashed from the street. Or, from the street, you throw beads up to the window and you get flashed from the windows.
Unfortunately, across the street, someone had techno music blaring all day. So, no one could hear anything from outside, so the house we were at, got ignored. And I had to see Tom flashing.

DR. HIBBERT: I can understand how seeing Tom flashing would be really traumatic.

GREG: I got over that. There was lots of other stuff going on. 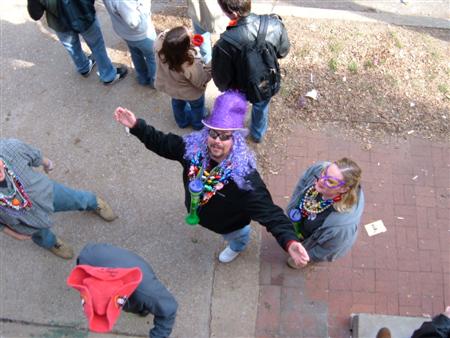 GREG: Many people dressed up with crazy wigs, masks, and of course beads. 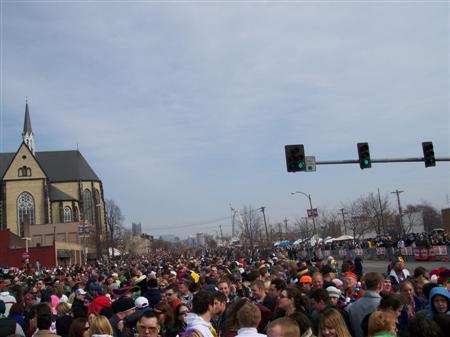 GREG: We then went down to the parade route to see what was going on down there. It was so crowded. I would say it there was about 10 times more people than there was last year.

DR. HIBBERT: It was so crowded this made your fun day turn into depression.

GREG: No, I can get over crowds. I’ve been to Disney World during the fourth of July. This was nothing compared to that. 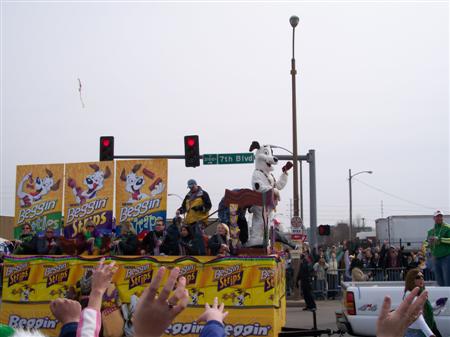 GREG: The parade was about 3 hours long. The parade is mainly independent floats. Usually, it’s people who get together to rent a trailer & a truck. The decorate it with some goofy gimick & throw out beads to the crowd.
Normally, I end up with about 50 or so bead necklaces. This year, because of the crowd, I only got about 6 strands of beads.

DR. HIBBERT: So, you were upset you didn’t get that many beads.

GREG: Well, I really don’t care about beads that much. I get into at the time, but I’ve got about 5000 beads at home from Mardi Gras past. 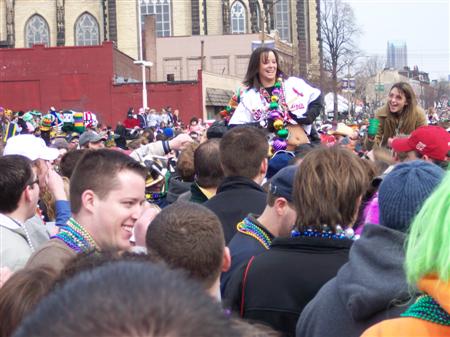 GREG: Of course a lot of girls in the crowd were flashing to get cooler looking beads. I don’t know why, they’re just worthless beads. But, I did see a lot of boobs. (sorry, I’m not going to show nudity on my site) 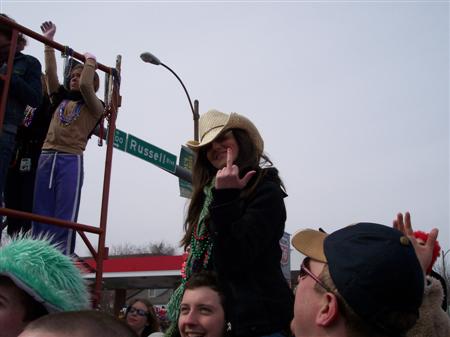 GREG: Some girls would not flash, and decided to show their middle fingers instead.

DR. HIBBERT: It always brings a person down when they are given the finger.

GREG: This didn’t bother me, I’ve been flipped off many times. 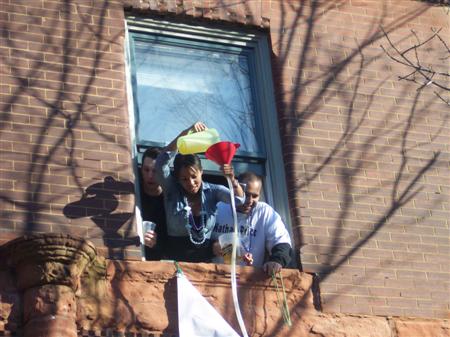 GREG: While walking back to the house, we saw a bunch of crazy stuff in the windows. One of the notable things (besides boobs) was a 2 story beer bong. 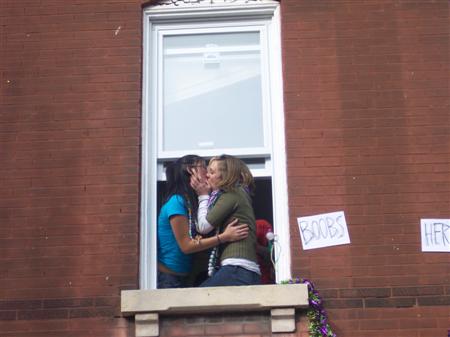 GREG: Of course, we saw many other things, some I don’t think I can legally describe to you. And we saw the occasional girls kissing. (note: Mom, if you’re reading this, I’m totally against this, I just put this up for documentation purposes… HAHAHAHAHAHAHAH.. yeah right) 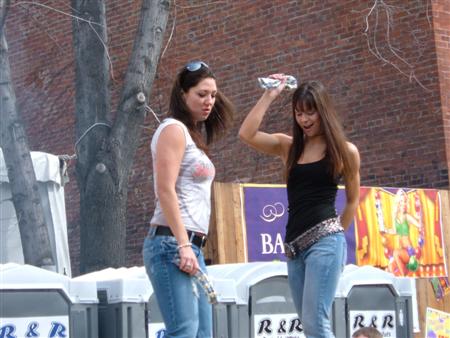 DR. HIBBERT: So, I don’t understand, it sounds like you had a pretty good time. Why are you so depressed?

GREG: Because, I have to wait until next year to see some boobs!!