I could say I’ve been very busy, but really, I’ve been very lazy. Well, I’ve kept filmbacon.com updated pretty well, but I haven’t really posted anything new on here in awhile. So, here’s whats going on.

Really, the whole month of October just flew by. Normally the whole Halloween season is my favorite time of year, but I didn’t get a chance to do anything thatexciting 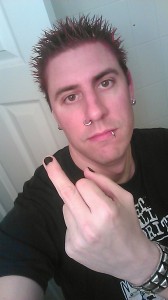 For one Halloween Party, I dressed up all punk rock. I sported the black nail polish and all the piercings.

Then for my Halloween party, there was a theme, Make Up your own Super Hero / Super Villian costume. I kinda stole the idea from the movie “The 5-Year Engagement”. Anyway, I could only find one picture of my costume, it’s taken in the mirror and the mirror is all dirty. But, here it is..

I came up with this idea for a superhero with a useless superpower. I called myself “The Stare”. I had the power to change red stop lights to green simply by staring at them. I even made an origin story, here’s video for the origin story…

One thing, I decorate my basement like crazy for Halloween, and have a “Scare-e-Oke” Party. But, I always forget to take some pictures. Here was a few pictures I took before I was actually complete. But, you get the idea… 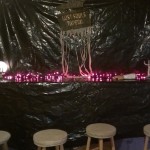 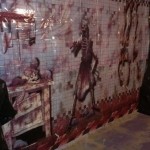 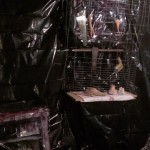 So, now November is almost over. And it’s time for the Christmas season. In planning for the transition, I watched “Gremlins” the other night. You know, it’s probably the perfect transition movie from Halloween to Christmas. I mean it’s got all the horror movies with Christmas in the background. It’s wonderful. 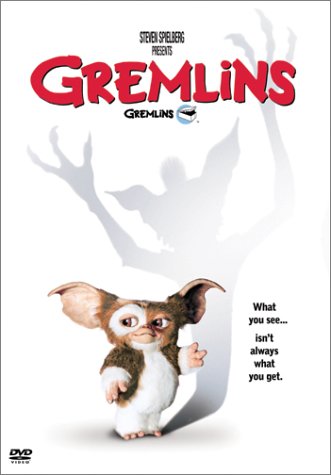 It’s probably been about 10 years or so since I’ve last watched Gremlins, which is very surprising since it’s one of my favorite movies from my youth. I already knew that “Gremlins” as well as “Temple of Doom” were the big reasons why the MPAA came up with the new PG-13 rating soon after. Even though at the time those movies got a PG rating, it was only by default since they weren’t gory / violent enough for an R rating.

I’ve become a multitasker while watching movies now. I tend to look the movie up while I’m watching it. Gremlins was originally going to be a much darker movie. Billy’s Mom was supposed to die in the house when the Gremlins first hatch. Billy would encounter this when he walks in the house and his Mom’s decapitated head would roll down the steps. Also, Gizmo was originally going to be the Mogwai that transforms into Stripe. Of course to make the movie more “kid friendly” they made some changes which were probably for the best. But, I would still like to see that darker Gremlins movie. Like everything else, I’m sure they’ll re-make it someday anyway.

Anyway, that’s basically my recap. I’ll have some newer post coming out this season. After all, all the Christmas beers are just hitting the shelves. Someone’s gotta review em.