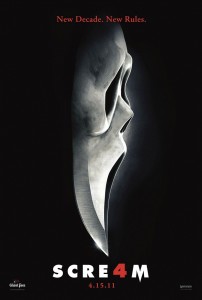 After 11 years on hiatus, the Scream series returns! I was a big fan of the series until the 3rd one. But, now Wes Craven is back for the fourth (and final?) movie.

The movie takes place back in Woodsboro, where Sidney is coming back to her old town for a book signing. Apparently, she’s a writer now. It just so happens to be the anniversary of the original Ghostface killings. How convenient! Don’t worry, Dewey and Gayle are still around too. They are now married, living in Woodsboro. Dewey is now the town Sheriff, and Gayle is still a writer.

Without spoiling anything, The movie is kinda like a reboot-sequel all in one. There’s more killings, more rules, and more blood. I was actually happy that this movie surpassed Scream 2 & 3. I would say it’s not quite as good as the original, but very good. Like any Scream movie, it makes fun of itself. It can be almost a comedy in parts.

Although, I liked the movie and would recommend it, I thought the first act was almost kinda too cheesy. In fact there were parts I was wondering if it was serious, or making fun of itself. Just because there’s some parts were the victims can be ridiculously stupid. But, I guess that’s all in the genre. If there was a real smart person involved, the killer would be caught in 5 minutes.

Just like an episode of Scooby Doo, I was able to guess one of the villains from early in the movie. Of course, the characters all act kinda shifty, so you never really know who’s a bad guy. It’s got some twists, and it’s a fun ride! I recommend it.