Back in late 1984, the Masters of the Universe had its share of good guys and bad guys. You had He-Man and his Masters (the good guys) and Skeletor and his Minions (the bad guys). Each week, He-Man would beat up Skeletor and his team of losers. Until a new team of supervillians came around….

Actually, the whole idea was to introduce some new badies to the series, only to spin them off as the bad guys in a new “Filmation” cartoon, She-Ra: Princess of Power. Yeah, we’re not going to talk about She-Ra today. My manliness would just go right out the window. 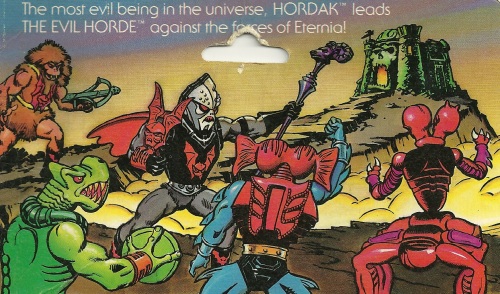 So, let’s look at the stats of “The Evil Horde”. First of all, they’re so “evil”, it’s an adjective they refuse to remove from their name. Never just call them “The Horde”. They don’t like that. In fact them they didn’t even use Horde at first. Here’s a few of their scrapped ideas: The Vicious People, The badass punks, The Rainbow Kids, The Angry Angersons, The Banana Boat, The Sex Kittens, The Brady Bunch, and The Ugly Women. After several meetings, they decided on “The Evil Horde”. By the Way, I’m going for a record on using the word “evil” in this article. 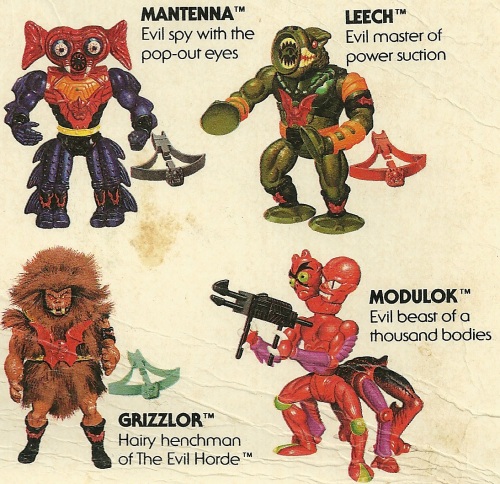 Before we get to the leader, lets look at the minions.
Mantenna “Evil Spy with the pop out eyes”. He was some crazy looking figure that you could never get to stand up by itself if you tried. He had some crazy pop out eyes so he could see exactly 3 inches above his head. Basically, if he stood on his tippy-toes he’s have the same view.
Leech “Evil master of power suction”. Yeah, he sucked. If you stuck him to your face and pressed his back, he’d give you quite the hickey. I don’t really know how useful that was in battle with He-Man.
Grizzlor “Hairy henchman of The Evil Horde”. He had no powers. He could just grow hair incredible fast. He was also the first figure to be ruined in the “Slime Pit”
Modulok “Evil beast of a thousand bodies”. This was a strange figure with many legs, many arms & two heads. I guess that could be useful, if you lose an arm or leg, you have a spare.

Forget those fools. Let’s get to the man of the hour. The leader of The Evil Horde (and apparently only $4.19 at Target in 1984), Hordak! 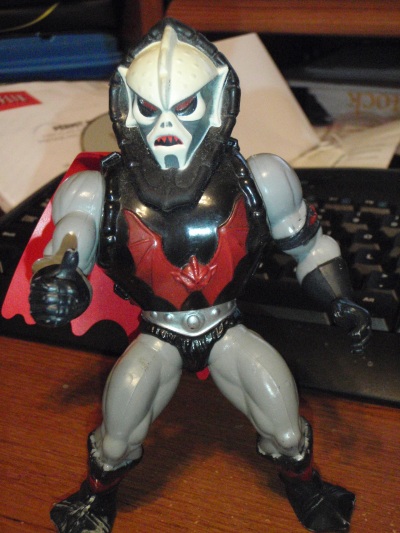 Yeah, I know, he’s so “EVIL” looking. He has a pig snout with pointy ears. Very intimidating at any circus sideshow. And what’s his fascination with bats? They’re on his chest, boots, and arms… whatever. And if you look closely, you’ll see he has a cape. He’s a very eccentric villain. Of course, this was the 80s, so he hadn’t seen the movie, “The Incredibles” yet. But, if he had, he’d know that capes are bad.

So, what can Hordak do? Not much. He’s got a crappy bat shield, and a useless weapon. Bah… Does he at least have a cool hideout? 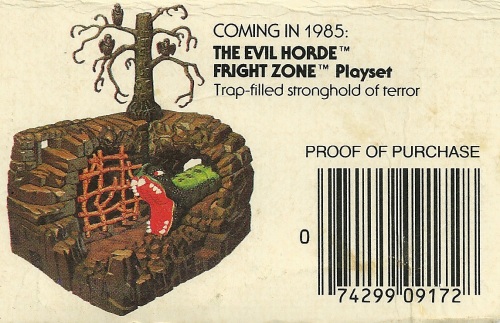 Really? The fright zone? A rubber snake puppet and a dungeon. Okay, I’m not going to lie to you. When I was 7 years old, I wanted this thing!!! I never got it though. It was basically when the He-Man series started to go under and basically crashed and burned. They tried to keep it alive by making crazier figures and an insane Eternia playset. But, it didn’t help.. the franchise fell under… 🙁

But, don’t dismay.. In keeping with “The Evil Horde” theme. I found some Horde related commercials…

3 thoughts on “The Evil Horde”