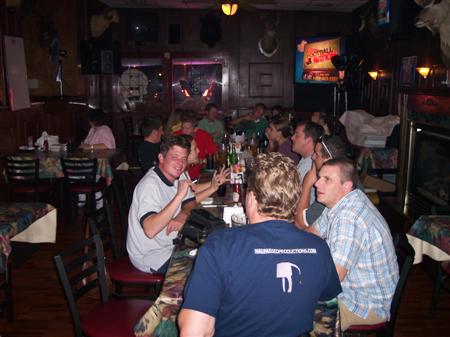 It was a nice Saturday evening. Kellee was turning 25. So, what better thing to do, than to have a surprise birthday party for her at Skips Place!!

Well, actually, like I’ve told you before in a previous article, this is Skips Place Too. 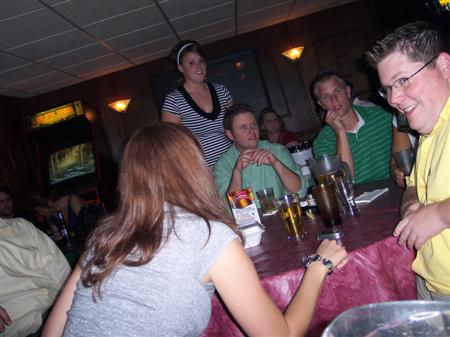 The gang was all there. Many of them I knew very well. The other bunch were people I’ve met at Rob & Kellee’s wedding a few months ago.

It was time to get started on the drinks. Elvis was coming with his Karaoke machine soon. So, we waited with anticipation. You see, every Friday and Saturday night at Skips Place Too, an Elvis impersonator hosts Karaoke Night. We’ve been there before, and we gave him a round of applause when he entered the building.

We started looking over the song books to pick out our songs. The following videos are the butchered songs that we all did. First up was Tom singing with Elvis.

Elvis found T-Bone, and handed him a mic. So, T-Bone & Elvis Rocked out to a little ‘Viva Las Vegas’. Either Tom forgot some of the words, or he was letting Elvis take the lead.

Next, T-Bone got to do a solo job singing ‘That’s All Right’ by Elvis Presley. It was complete with the 2001 Space Oddessy Intro. In this clip, we can see why T-bone’s singing career never took off. Sorry, this is just a clip, because my camcorder went dead after this song. I ended up using Jeff’s camcorder the rest of the night. Oh, also note the cool ass shirt T-bone is wearing. It’s a ‘half-assed productions’ shirt that I made. I gave one to Rob, Dana, & Tom to wear. Other people there asked me for one too. I should start selling them.

Here we have Rob taking the mic to sing ‘Beautiful Girls’ by Van Halen. He even quotes an old Saturday Night Live commercial for Schmidt’s Gay Beer at the begining of the song. This video cracks me up all the yelling & ad-libbing that Rob adds to the song.

Oh, at this time, I’d like to note that the place was really dark, plus I was drinking more than I should have, so the picture quality on some of these videos are a little lower quality than they should be. Sorry…

Here’s Dan singing ‘I Ain’t the One’ by Lynard Skynard. He actually sounded pretty good. Dan has actually been in a band, and he has a pretty decent singing voice. But, to be honest, it wasn’t that hard of a song, just use a twangy voice. I’m sure if I were to sing it though, it would sound like crap.

Kellee & the a bunch of the girls went up there next to sing ‘Piece of My Heart’ by Janis Joplin. Hmmm… yes, these girls haven’t been signed to a Major Label yet. But, act now, and you can cash on on these lovely voices.

Up next was Dana with ‘Change in my Pocket’ by the Georgia Satellites. I think he actually sounded pretty good doing this song. One of the funny things is that I’m drinking even more, and well, I start having people plug my website on stage for no reason at all.

Here’s a small little portion of someone singing ‘Don’t Cha’ by the Pussycat Dolls. Basically this video just shows a bunch of us dancing.

T-Bone & Rob decided to get up on stage and do a joint effort. The sang a ‘In the End’ by Linkin Park. I love when they hit the high notes. They just can’t quite belt them out. An E for effort.

Here’s one of the few drunk little escapes I made at the bar. I got 4 strangers at a table to say that their favorite website was half-assed productions. Then of course one made a smart ass comment about girls gone wild. It’s kind of funny now that I look at.

Here’s the girls singing ‘Just a Girl’ by No Doubt. For some reason, I’m totally getting into it. Imagine that.

Okay, yes, I even went up there to sing a song. Me & Dana went up on stage to sing ‘The Ballad of Chasey Lain’ by the Bloodhound Gang. This is a pretty dirty song. Lots of profanity and sexual innuendo. So, I thought it would be the perfect song to sing in front of my family. It takes a lot of beer to get me up on stage, and you can see I really get into the song. Yep, forgive me for this one.

T-Bone sang one more song. He sang ‘What’d I Say’ by Ray Charles. The most memorial version of this song is from Tommy Boy, where Chris Farley & Brian Dennehy are singing Karaoke to this.

The last song I remember any of us singing was ‘Eat It’ by Weird Al Yankovic. The remaining people from the birthday party got up on stage to sing it. I brought the camera on stage with me. And it’s basically impossible to watch this without throwing up. The camera is going all over the place, and it makes you sick.

So, there you go. Another Karaoke Jam in the books. Dana & Dana drove me home safely, I’d like to thank them for that. Maybe I’ll return the favor for them someday. Anyway, it was a good time, and if you’re ever in the neighborhood of Broadway & Osceola in St. Louis, stop by Skips Place Too, and sing some Karaoke with Elvis.

2 thoughts on “the monotone choir”