As you know with me, I like to frequent the many bars in the St. Louis area. One of the most popular one with my family is called ‘Skip’s Place’ Okay, actually it’s called ‘Skip’s Place Too’. Apparently there’s another Skips Place somewhere else in the city, and this is the second one. 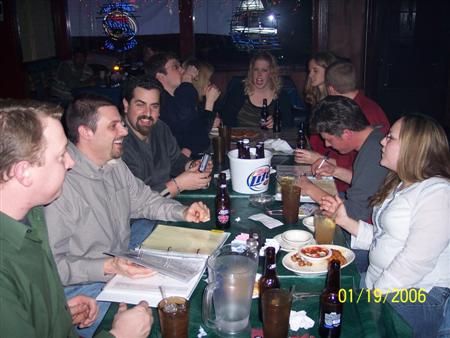 Here’s the scenario… Tom’s birthday was well over a month ago. But, there were problems, where we couldn’t have a little shindig until now. So, we all got together. Let me introduced everyone pictured. From the Front to Back starting on the left side of the table is: Tom, Jeff, Dana, Ryan, & Julie.. From Front to Back on the right side is: Heather, Dan, Rob, Kellee… And Dana is in the center in the back of the table. Okay, before it gets confusing there’s a girl Dana, and a guy Dana. They both got married to make it confusing for everyone. That must be hard for the mail.

I remember when I was younger I knew this guy named Jamie. That’s another name that could be a male or female name. Anyway, he used to tell me he would get free samples of tampons in the mail. I guess they thought he was a chick. Anyway that’s beside the point.

After a few rounds of beers, Elvis had entered the bar. Yes, Elvis. He brought his Karaoke Machine with him. Of course my family with monotone singing voices was excited to sing some songs without embarassment. 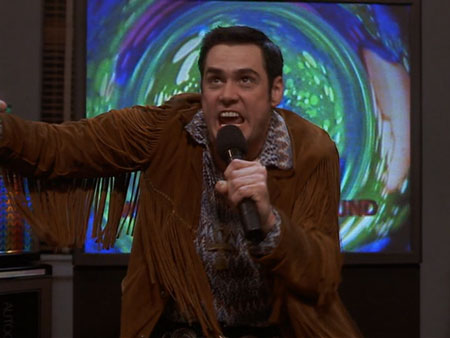 THIS IS GOING TO BE THE BEST KARAOKE JAM EVER!!!! 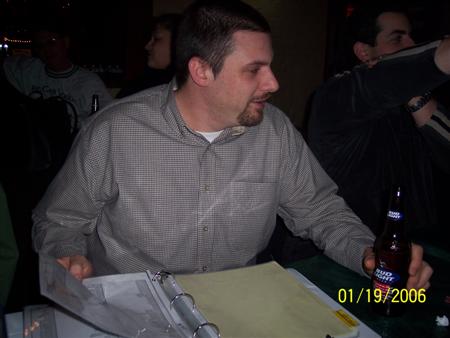 So, Jeff checked out the book full of songs. He was disappointed by the lack of songs from Tesla, Dangerous Toys, & Kix, so he decided to pass on the singing. Everyone else checked out the holy book and picked their songs. 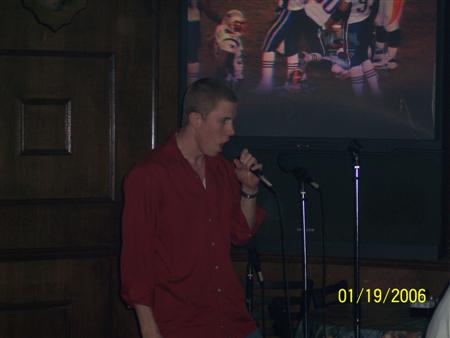 Rob was the first one to take stage. He decided to do an Elvis tune, since Elvis was running the show. By the way, before I continue, most of these pics have a date on them. The date is wrong, it wasn’t my camera, I would have turned the function off if I would have known it was on. Oh well. So Rob sang about 5 or 6 songs. He didn’t sing them all in a row, but about every third song, Rob was singing. One of the highlights was him trying to sing Dream On by Areosmith. He couldn’t quite hit the high notes. DREAM ON.. DREAMM ONN AHHHHH HHAHHA… I guess you had to be there.

Oh, also, Rob was the first person to plug half-assed productions dot com! After he did it, pretty much everyone in the group decided to plug the website. So, if you heard of this site from Skips Place, please drop a comment. Especially if you’re that hottie in the blue shirt (you’ll see her in a picture coming up). 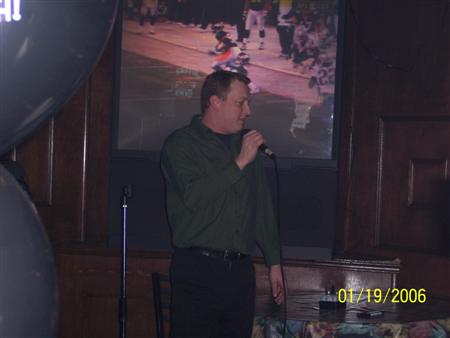 Tom rocked the mic next. His rendition of ‘Sweet Caroline’ was perfect. We refered to Tom all night as his nickname, T-Bone. Even on the karaoke cards that were filled out, he put T-Bone for his name. Needless to say, T-Bone’s name was called to the stage about 10 times.

Click on the pic of Tom for a clip from his ‘Sweet Caroline’ performance. It’s not the best quality picture, but it’s the audio you really want to hear anyway. Notice on the tv, the ad for some wrinkle cream. 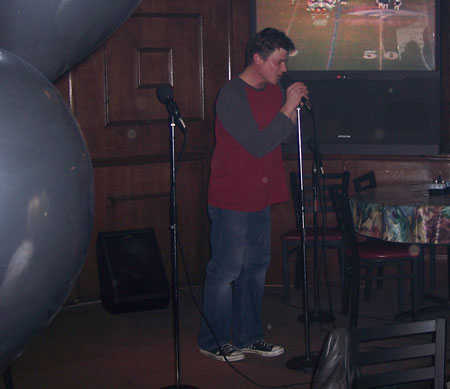 Dan kicked it old school next with ‘Kryptonite’ by 3 Doors Down. Dan was the only one there, that has actually been in a band. He’s used to showing a stage presence. He actually sounded good. Elvis was proud. 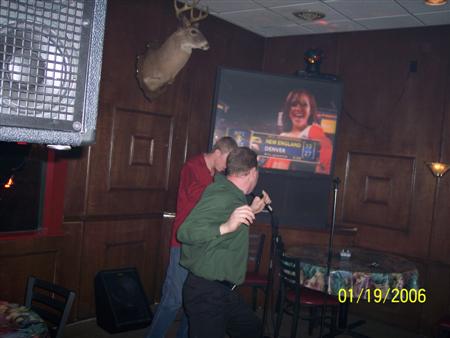 T-Bone needed a backup singer for some tune that I can’t remember right now. He hired Rob to back him up. It was pretty funny. 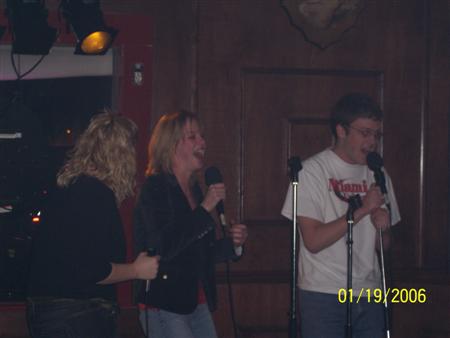 Here’s Dana, Julie & Ryan up on Stage. I’m sorry to say, that I have no idea what they sang. Jeff must have taken this picture. For about 15 minutes, Rob & I sat at the bar playing ‘Photo Hunt’ (which is the greatest bar game in the world!) Anyway, I’m sure you guys did a great job. 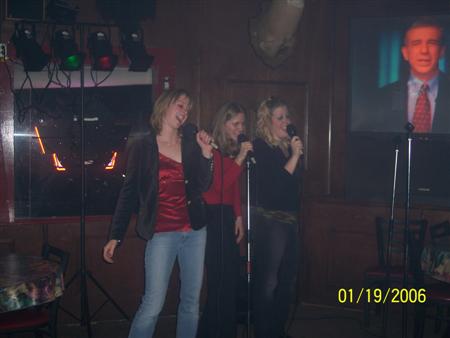 Oh, we weren’t the only people that were getting on stage. It’s just the majority of the people in T-Bone’s party were up on stage. This is Dana, Julie & Kellee singing some N’Sync. Yes, it should be sung by guys and not girls, sorry… 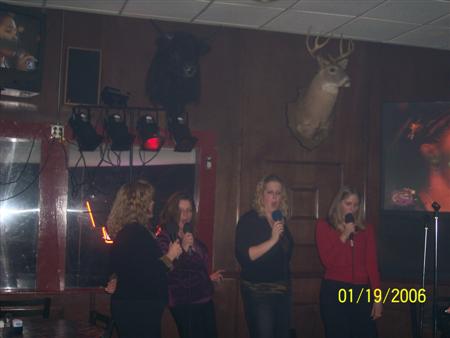 A couple of strangers wanted the girls to sing Dancing Queen by Abba with them. So, they did. By this time, Kellee was kind of on the wasted side. hahah… 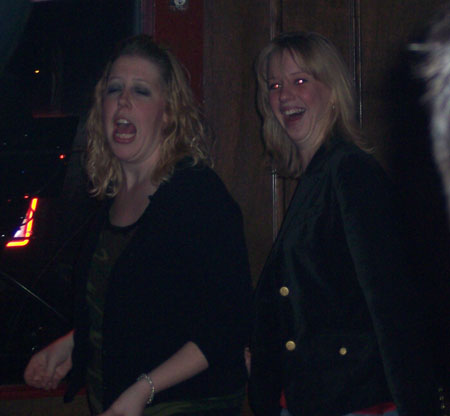 Jeff wanted me to post this picture, untouched of Julie & Dana. It’s one of the creepiest pictures I’ve ever seen. But yet, I can’t look away. 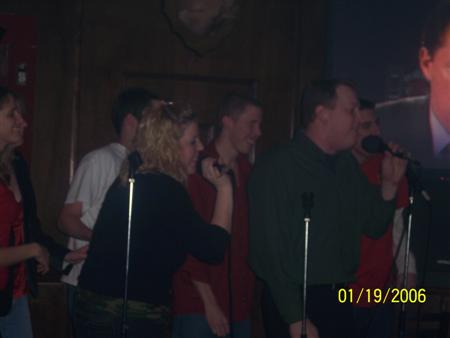 Now was the time, where we got everyone on stage to sing some Weird Al. We sang Amish Paradise. Luckily, the mic by me was off, so you couldn’t hear my beautiful singing voice. You can hardly see me, T-Bone is in front of me. 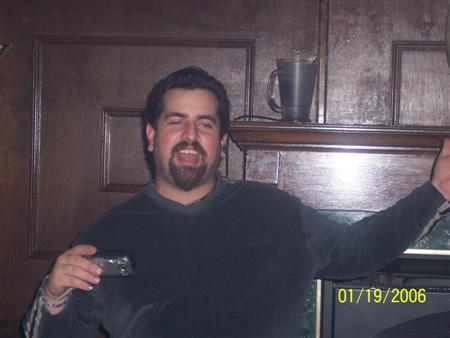 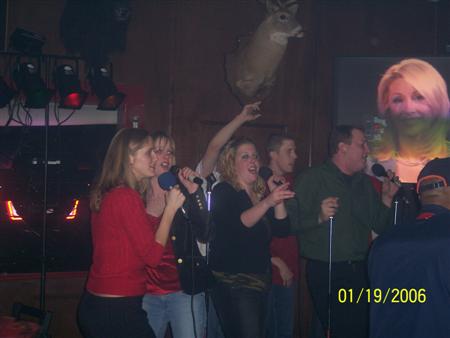 Here’s another pic of us all on stage. Again, you can’t see me behind Tom. Believe me though, I’m up there. By the way, you can tell this place is classy, check out that mounted deer head! 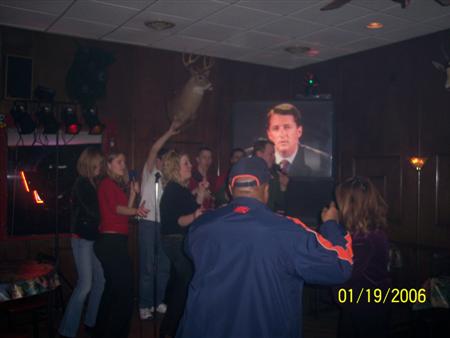 People actually started dancing to us singing. We could tell people were either legally insane, or they were getting pretty drunk. 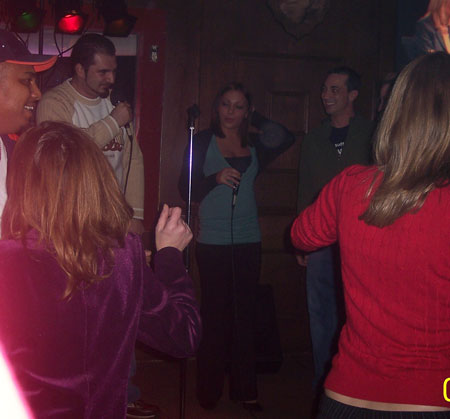 Yes, there were other people besides the people in our group that got up on stage. Here’s the hot chick in the blue shirt I was talking about earlier. Hey Baby… I got a website… huh huh… 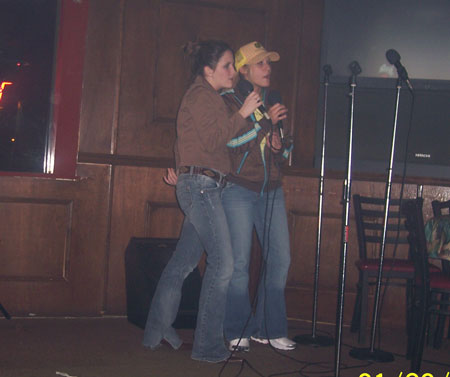 Here’s another couple of Hotties that got up on stage and sang. They sang some country song about getting drunk. I know I heard it before. I used to hear it at my friend Tim’s house every time I went over to Dupo, IL…. WOOO!! 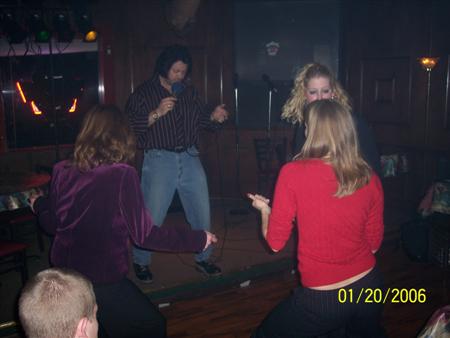 Lastly I wanted to show you the man behind the Karaoke Machine. Yep, it’s Elvis in the flesh. Singing genuine Elvis Tunes! 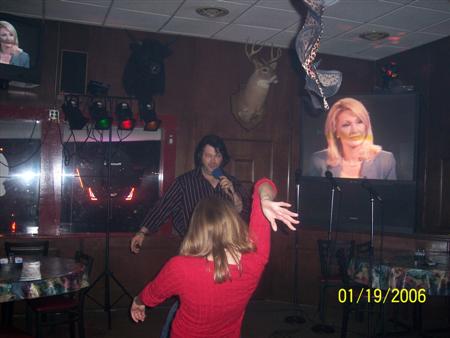 Kellee got so excited she threw her bra up in the air!!!

When we left Elvis shook everyone in our party’s hand. He was happy we were there, but he was also sad to see us go. I guess we kept him entertained for the evening. So, anyway, it was a great time, and we’ll have to all do it again sometime.