Today, I’ve got a short little article about new sodas from the Jones Soda Company. I know, everyone has already reviewed these. I’m the last to do it. So, if you want to see other reviews check out X-Entertainment or I-Mockery. There are four new Halloween Edition Sodas from Jones Soda. They are exclusive to Target Stores too, so that’s the only place you can find them. They’re in half soda cans. I looked at my local Target, and found only 2 of the four. They are the 2 most Halloween like anyway. So, I will review them. 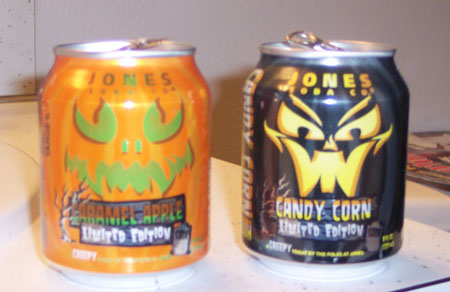 There’s the 2 cans. Very spooky looking. If you can say that. They say limited Edition, so get them while you can. But if they’re as popular as the Jones Soda’s Thanksgiving Sodas, then they’ll be back next year. If you don’t know about the Thanksgiving soda, they have had Turkey & Gravy Soda along with other thanksgiving side items. 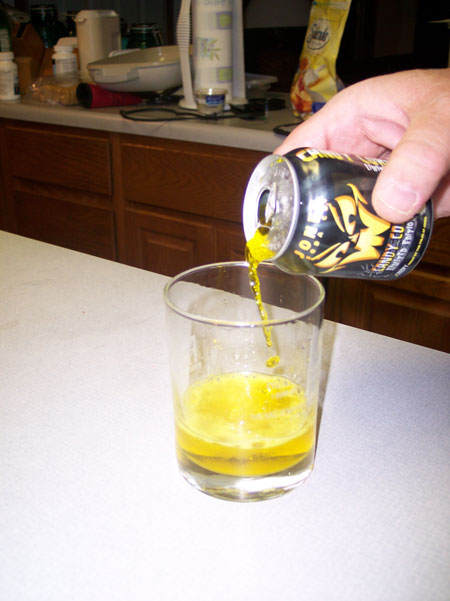 Okay, lets pour some soda and taste it. Above is the Candy Corn soda. It looks exactly like pee. Well, it looks like pee if you swallowed some neon yellow crayons. It looks like it would react perfectly to a blacklight. I didn’t test it out, but you can only imagine. 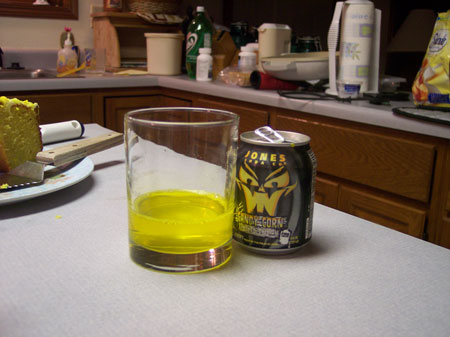 Okay here’s maybe a better shot of the Candy Corn soda. I thought this soda tasted exactly like drinking maple syrup out of a bottle. It’s not as thick as syrup, but it’s just not good. I don’t see how anyone could drink the whole can of this, and the can is small. Here’s some other reviews:

Mom: “like cream soda, but sweeter… not a good choice”

Kim: “Very sweet, good for a couple of drinks, wouldn’t be able to drink the whole can!”

Caleb: “I spit it out, it tastes like slime”

Doug: “I hate candy corn, but in soda form, it was great!”

Josh: “Little scent, but candyish, found noodle like structure in the drink, tastes like crap, very syrupy, hooray for boobies!” 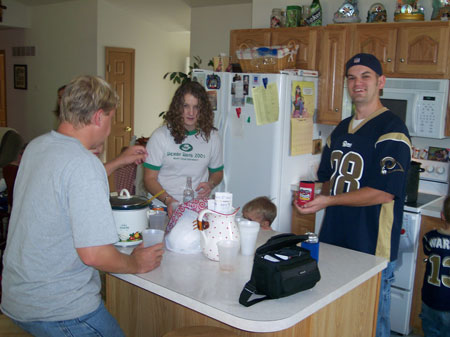 So, the majority of the people hated the Candy Corn soda except for Doug. Now lets take a look at the Carmel Apple soda… 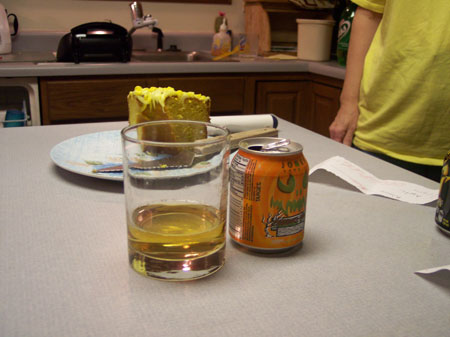 There’s what it looks like. It doesn’t look as crazy neon color like the candy corn. I thought this one was much better than the Candy Corn. It tasted like apple juice with a hint of carmel. It’s really hard to taste the carmel, but it’s more like apple juice than a soda. It doesn’t seem carbonated the same as regular soda.

Here’s other reviews of the Carmel Apple:

So, there it is. Sorry for the short article. Me and Jeff are working on our Haunted house. I’m documenting as much as I can. It’s going to be great.

(copied over from original article – http://www.halfassedproductions.com/articles/100505/11.html)