Hey Everyone!
Well, it’s fourth of July weekend. And here in St. Louis, they have a huge fair downtown called Fair St. Louis. But,
this year instead of looking all over for a parking spot and dealing with crowds, we decided to check out one of the
many other town fairs in the St. Louis Area. 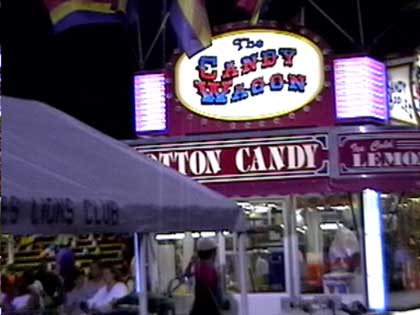 Yes, we ended up going to the Webster Groves, MO Fourth of July Fair. It really seemed like they got their stuff
together. They had tons of carnival rides, games, food, and best of all Carnys! 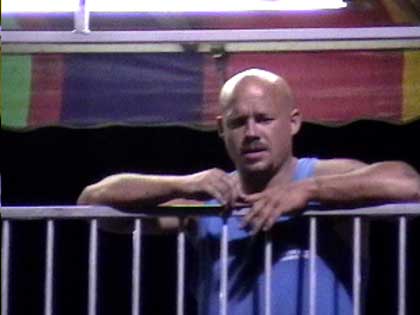 Here’s one of the first Carny’s I saw. He was operating the ‘fun slide’. After seeing him, it takes all the ‘fun’
out of it. It was lucky I was 30 feet below him, or else he would have pounded me with his Carny Fighting skills. 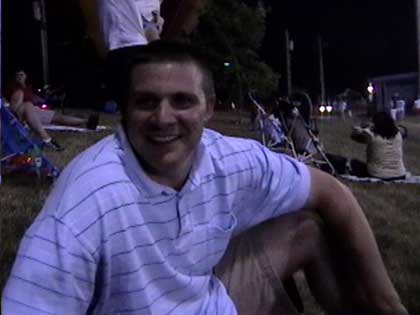 Okay, before I get ahead of myself with the Carny’s. It’s best to get some beer & carny food in your system. I asked
Jeff if he wanted a beer. He agree, so we decided to take a journey to the beer tent. 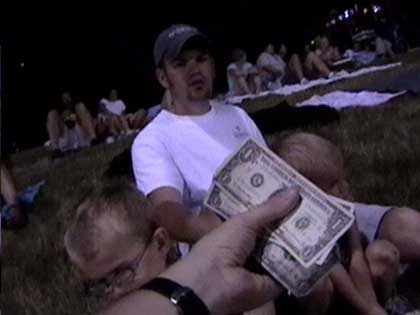 Josh wanted a beer too, so he handed me 3 bucks. I hope that’ll be enough for the beer. Sometimes these carnivals
can be expensive. We already walked past the ticket booth. Tickets were $1 each. And the big rides cost either 4
or 5 tickets. I’m not paying that much for 1 ride. 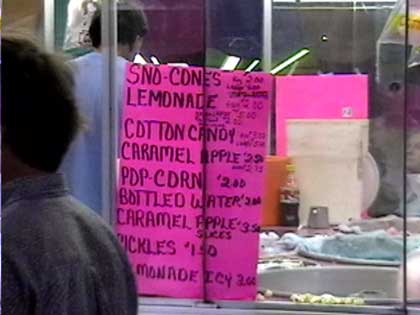 The funnel cake line was unbelievebly long. They smelled great, but the line was about 2 blocks long. And I wasn’t
waiting that long. The fireworks were going to start in 10 minutes. The menu at the candy wagon looked good, but
still too much for me. I guess I’m cheap. Okay, finally we find the beer tent. 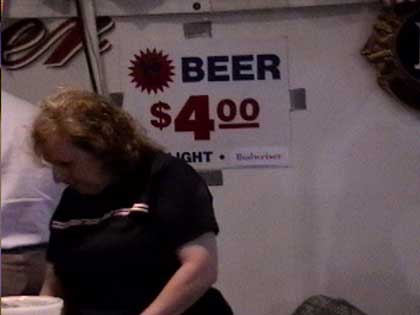 Four bucks?! Man, four bucks for a beer? I can get a 12 pack of Natural Light for 6 bucks. Oh well, so Josh shorted
me 1 dollar for his beer. I have it documented, so I can prove to him that he owes me a dollar. 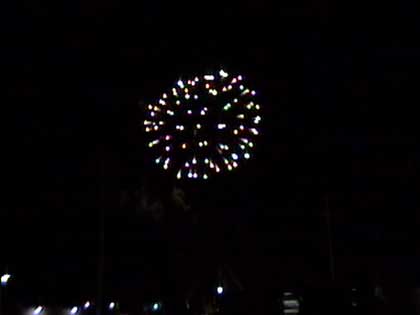 Now, they dim the lights of the fair, so everyone can enjoy the fireworks display. I must say, it was a pretty good
show. It was about 10 minutes long, but it was pretty decent for a small town fair. 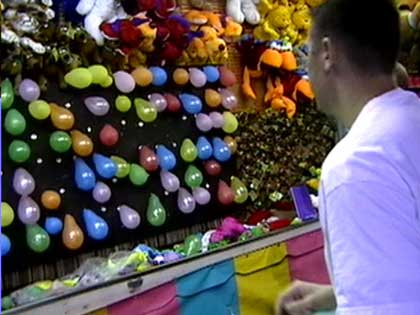 So, I decided to take a shot at one of the many games they had there. This one seemed easy enough. Throw a dart at
a balloon. And you win whatever size prize the tag says behind the balloon. The kid before me, threw a dart, and
missed completely. He won a little small prize. So I figured, at least I’ll win something, even if I miss. 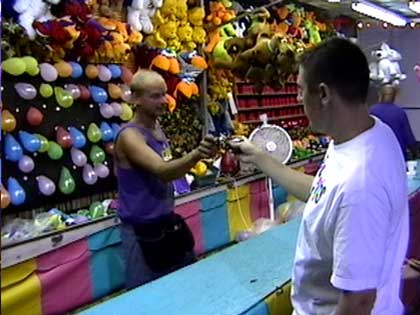 I hit a blue balloon, and I ended up winning the same small prize as the kid in front of me! What is up with these
crazy Carny rules. Before I threw the dart this Carny, told me a little ‘joke’ that I had to close my eyes and throw
the dart with my foot. HAHAHAHAAHHAAH HOLY CRAP, that’s the funniest thing every. Damn Carnies.. 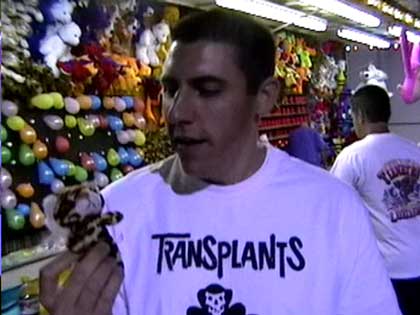 So, here’s my small prize. Woopdeefreakin doo. I could have thrown the dart at someones head, and I would have won
the same exact prize. Click on the image of me above for a video of the spectacular throw by me. 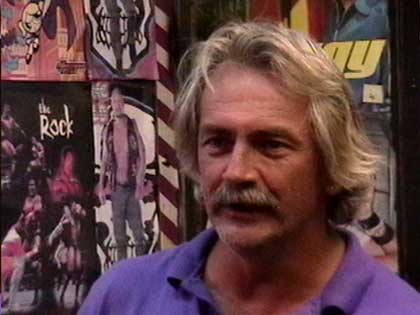 Now, for my favorite Carny of the night. The Poster Game Carney. My Godson who was with us at the time, wanted
a green day poster for his room. So, I had to step up and win one for him. I had this Carny explain the rules to me.
The way he talked made bite my cheek, so I wouldn’t bust out laughing. 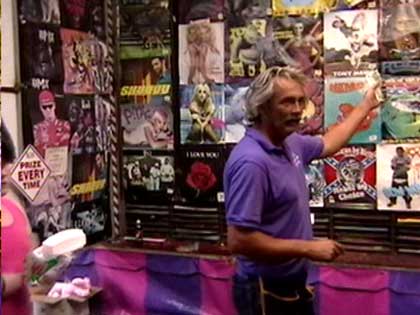 According to his logic

There ain’t no way you gonna lose
You have to be pretty drunk to lose at this
In this picture a girl wanted the ‘Toby Keith’ poster, he said, Oh you just about hit him in the kisser 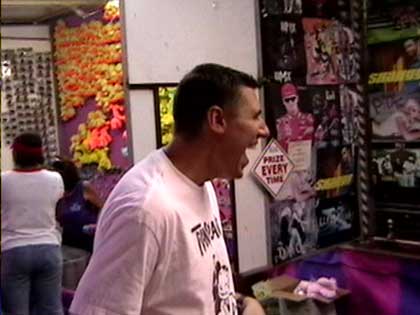 So, all you have to do, is aim the dart for the poster that you want and you get that poster. It’s that easy.
Plus, you were only standing about 5 feet away. 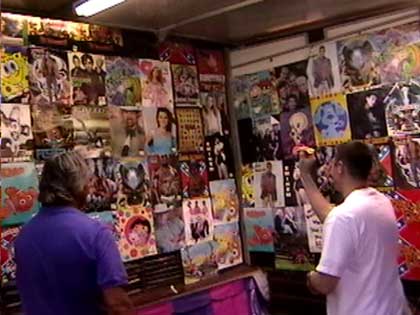 Although, with my luck I was going to hit the ‘Creed’ poster or something lame like that. 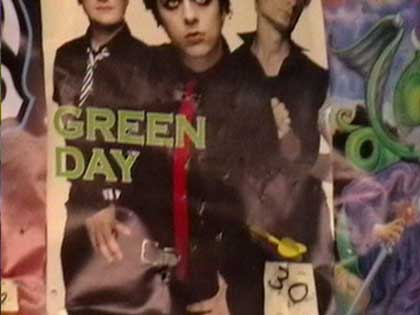 YES! I won the poster. And as the Carny said, I turned a Green Day into a Happy Day. He also said he’s never heard
of Green Day. Click on the green day poster above to see the hilarious video of this Carny! 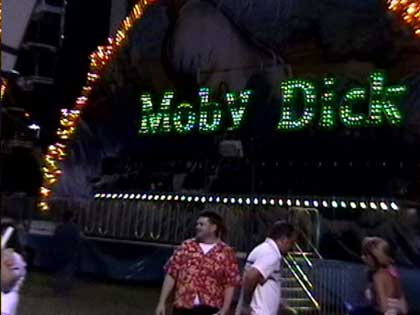 Before I move on to the last Carny. Lemme show you a few of the rides. This one for example was called ‘Moby Dick’.
Of course I had to make the joke, all the girls like to ride Moby Dick. 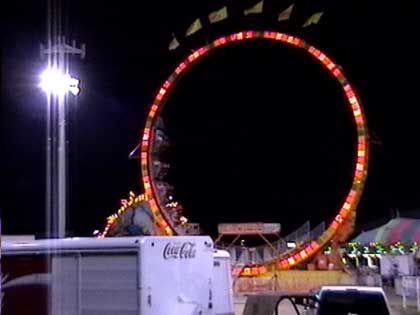 Here’s another one I would have liked to ride. It was called ‘Fireball’. Or as Josh called it, ‘Bad to the Bone’.
Yes, for some reason Josh is trying to bring back that phrase. Anyway, it looked cool, you went completely upsidedown.
The only problem was it was 5 bucks to ride the thing. 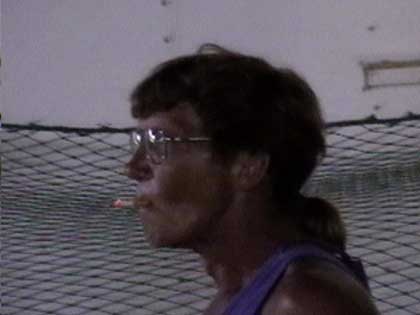 This Carny’s picture is in the dictionary if you look up the word Carny. I mean, he’s got the wife beater, the
cigarette, the tattoos, the 3 teeth, and the mullet in a ponytail. 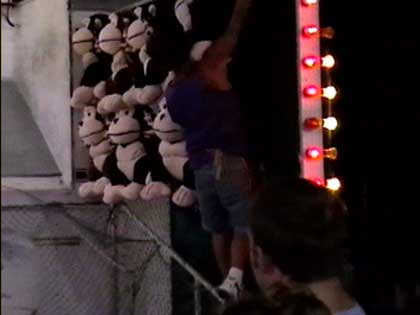 He was running the basketball game. If you make a basket you win a monkey. Of course we thought the rim was smaller
than the ball. But then we saw someone win. Of course when someone won, he had to risk injury climbing to get a prize. 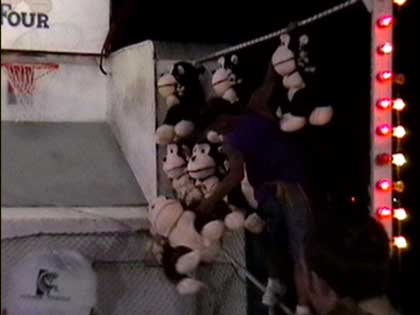 Click on the image above, and you’ll hear me and Josh contemplating the question if Carnies get health insurance
or not. 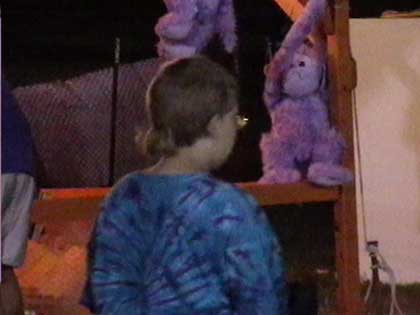 On our way out, we saw what we thought must have been one of the Carny’s kids. He had the mullet and the kick ass
tie-dyed shirt. We wonder where he got the shirt? 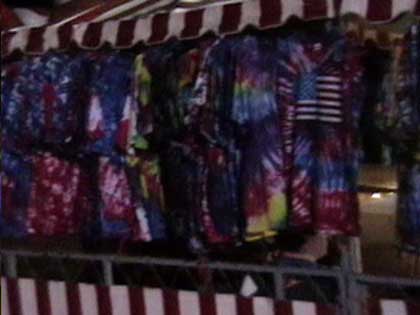 Oh, there. Dude, they have everything at this fair.