Back in 1984, Six Flags St. Louis (or Six Flags Over Mid-America as it was called at the time) opened a brand new roller coaster. This wasn’t an ordinary coaster.

This was one of the first of it’s kind. In fact, there were only 3 stand up coasters in the USA. Two of the coasters were just old coasters with new stand-up trains on the track. Those were EXT at Worlds of Fun in Kansas City, MO and Rail Blazer at Six Flags in St. Louis, MO. The other stand up coaster was built from the ground up. That was King Cobra at Kings Island in Mason, OH.

Today, we’ll be talking about the Rail Blazer. First, lets was the commercial:

That was the promotional material for this ride. Back in grade school I remember everyone talking about wanting to ride this thing. First a little history… 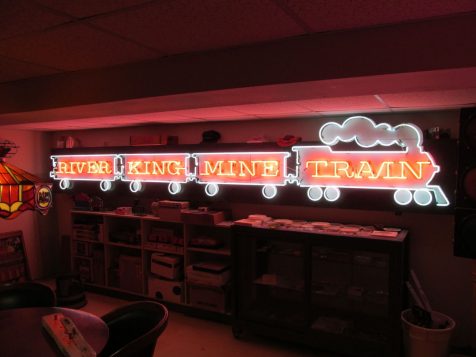 So, at this time there was a ride (and still is) called the River King Mine Train. The name has changed from The Mine Train and back to “River King Mine Train” and back again. But, at the time it was a dual track Mine Train coaster. One track went in one direction and the other went the other. The trains would meet side by side at the end of the ride for the big hill at the end. It was a cool ride, but they rarely had both sides going at the same time. 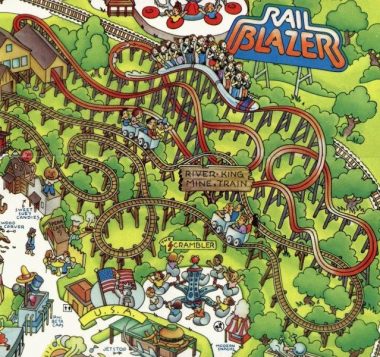 Less people were riding the Mine train thanks to the Screaming Eagle wooden coaster and the newer looping coaster, Jet Scream. So, they retrofitted the Mine Train track on one side and put a new stand up train on it. Six Flags called it the “Rail Blazer”. 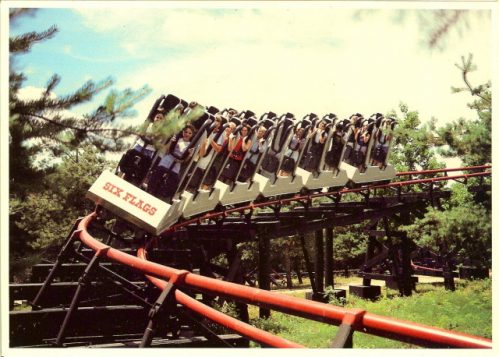 The ride opened on June 17, 1984. It appeared the park had a new hit on their hands. Unfortunately, 3 weeks after the opening an accident occurred.

On July 7, 1984, a woman slipped out of the harness on the ride. She fell, hit a tree, crashed to the ground and died. There’s many reports of what actually happen. They say she was a large 260 pound woman, and the harness just didn’t close tightly. After investigating the ride, they concluded there was no mechanical failure. In fact, the restraint system remained latched throughout the ride. And she just slipped out of the restraint. 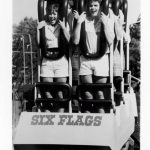 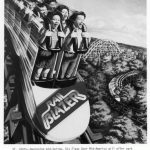 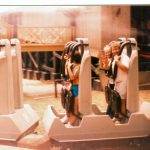 There’s very few pictures on the web of the cars and the restraint system. But, you can see that there’s a mock-up from promotional materials and the real thing. It appears to have a shoulder harness, a harness around your knees/legs and one around your waist. To be honest it seems pretty poorly designed and never really held a person in perfectly.

Newer Stand-Up coasters have you straddle a seat similar to a bicycle seat and a shoulder harness snaps to that. It locks you in much tighter and allows the coaster to go through loops without the chance of throwing you out. 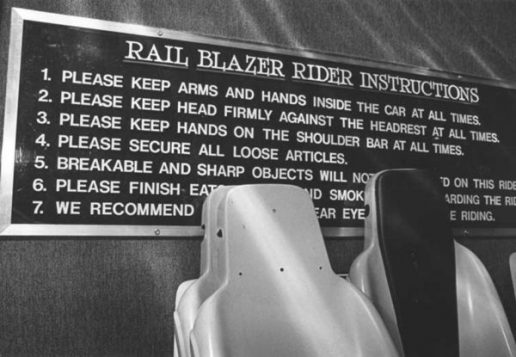 Rail Blazer was re-opened on August 8th, a month after the accident. The harness system was modified before it reopened. But, it was closed at the end of the year. Six Flags Officials claimed “the ride failed to catch on with the public”. But, we all know that there’s just no coming back from a terrible accident on the ride. The following year, the Mine Train cars from the River King Mine Train were put back on the track, and it still remains today (2018).

I never got to ride “Rail Blazer” when I was a kid. I was just too short at the time to ride it. But, I always have memories of this ride back in the good old days of Six Flags Over Mid-America.

I hope you enjoyed my look back at a ride from 34 years ago.

* Many pictures and information were obtained from Theme Park Review.