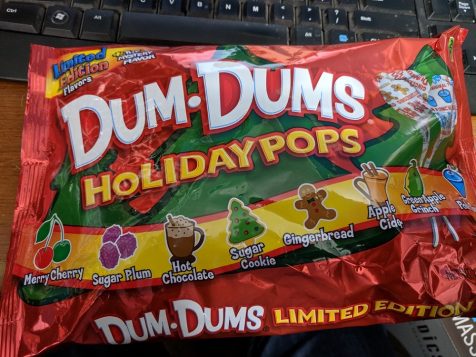 This post sucks. Get it? Yeah, 9 different flavors of dum-dum suckers just in time for Christmas. I don’t know if this is new this year or just a common thing. But, it looked like a great time to write a new post.

So, lets look at the flavors we have: Merry Cherry, Sugar Plum, Hot Chocolate, Sugar Cookie, Gingerbread, Apple Cider, Green Apple Grinch, Polar Punch, and of course – The Mystery Flavor. Looking at these flavors, I’m assuming that Merry Cherry is just Cherry and Green Apple Grinch is just Green Apple. But, I’ll have to try them all to see. 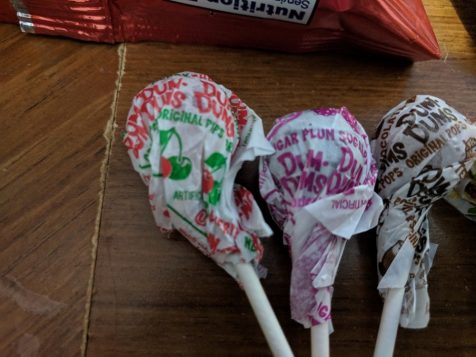 Merry Cherry – Well, I was right about this one. It’s just Cherry. There’s no real change at all except for the festive red & green cherries on the wrapper.

Sugar Plum – I really didn’t know what to expect for this flavor. I don’t think I’ve ever had sugar plum before. As far as I know they’re dried fruit mixed with sugar & nuts, rolled in a ball and dipped in sugar. This sucker basically tastes like grape candy. 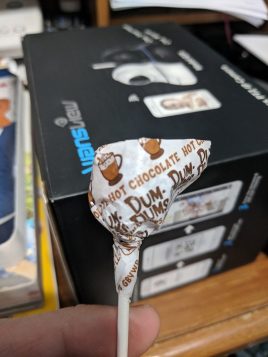 Hot Chocolate – I’m actually pretty surprised with this one. It actually tastes like hot chocolate with the marshmallows and all. However, it’s pretty close to resembling a tootsie roll. I dunno about you, but a chocolate sucker is kinda weird. I’m used to chewing / biting into chocolate. It feels weird eating chocolate like this. 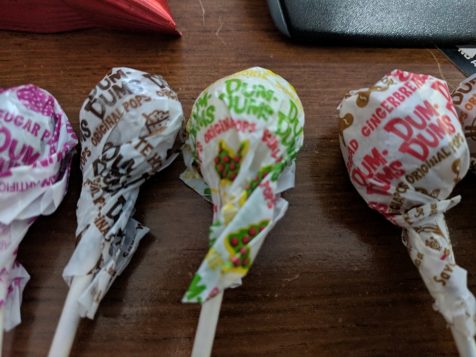 Sugar Cookie – This is another weird one for a sucker. I actually think they just renamed their cream soda sucker. It tastes pretty similar. 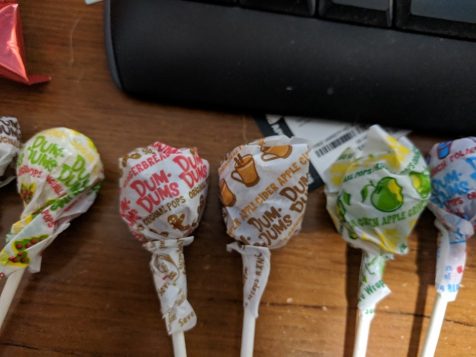 Apple Cider – This one must be really rare. I searched my whole bag and only found one of these included. I definitely get the apple flavor, but I’m not picking up much of the cinnamon & spices that should be in a cider. However, it’s actually good. Sadly, this is the only one I have.

Green Apple Grinch – Just as I suspected, this is just your normally green apple flavor. Yes, it’s tasty, but it’s not anything Christmasy.

Polar Punch – What exactly is polar punch? I guess I would expect something like a berry blue koolaid. I can’t quite put my finger on the flavor, but it’s maybe a blue raspberry. It tastes like the blue colored freeze pops that would always get eaten before the other colors. 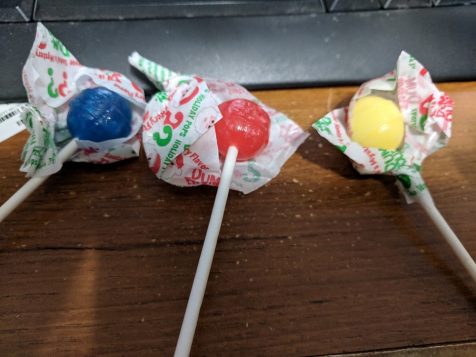 I wouldn’t say that Dum Dum Suckers are the most festive candy, but they try. In all these flavors I think I’d have to say my favorite is either Polar Punch or Apple Cider. If I owned a bank or a doctor’s office, I would put these things out for the kids. And save the caramel dove bars for myself.