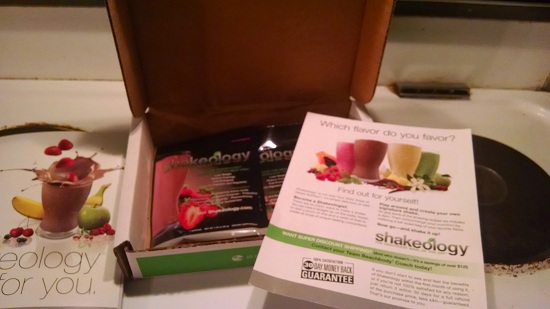 If you’ve been a fan or read anything on this site, you may not think that I’m the healthiest person in the world. And you’d be right. I’m used to trying the latest candy, snacks, or beer. But, today, I thought I’d post my thoughts on Shakeology.

For those that don’t know, Shakeology is like a “super” shake. It comes from Beachbody, makers of P90X, Insanity, etc. This shake can be used as a meal replacement or just a post workout shake. It’s supposedly loaded with the healthiest stuff you could pack into a shake. However, it seems pretty expensive. A 30 day supply of the stuff is $130 bucks. So, if I was going to start drinking this stuff, I wanted to try all the flavors. 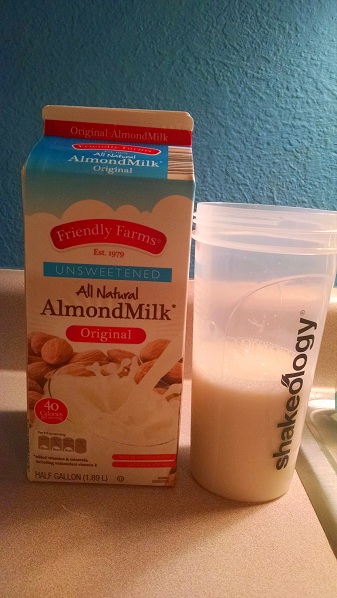 Luckily, they have a “taste Sampler” pack you can buy which includes 4 different Shakeology flavors. There’s Chocolate, Vanilla, Strawberry, & Greenberry. However, for the taste pack, it’s still $20 bucks, which is $5 bucks a shake. The 30 day supply is equal to $4.33 a shake. I guess if you look at it as a meal replacement, it’s cheaper than most meals you can buy.

Anyway, my plan is to add this stuff to my diet with my normal workouts / running. That is, if I like any of these flavors. I’ve mixed all my shakeology with almond milk. Here’s my reviews… 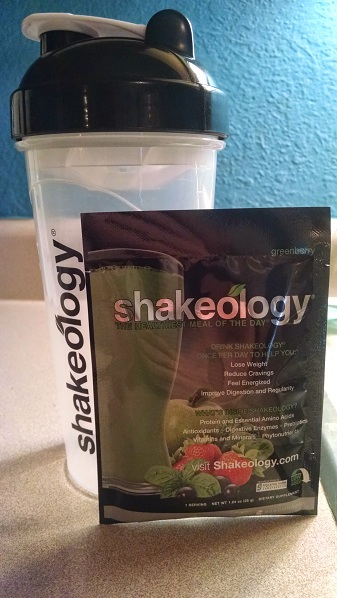 This was the flavor I was most interested to try. After all, It’s not a normal flavor. So, as you can see, it’s nothing short of green. It looks like something that would be in a comic book. Something that would change a normal guy into some super-powered freak. 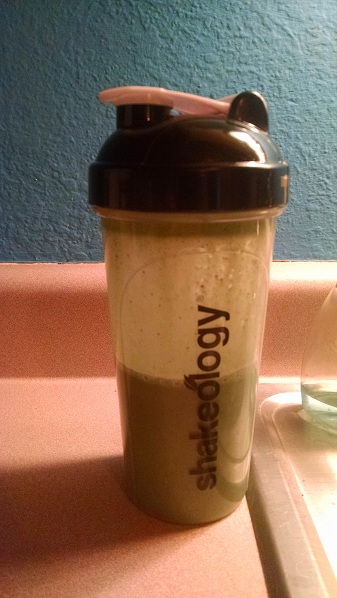 Smell: The smell seems something like Captain Crunch Crunch-berries.

Taste: At first it was like I was drinking Crunch-berries. Then, the backend tastes like a sweet green tea. And that’s exactly what it tastes like. It’s like I poured green tea on my crunch berries. Surprisingly, it’s not a bad combination. It just takes a little getting used to. I will know way more after trying the other flavors, but this just isn’t for me. 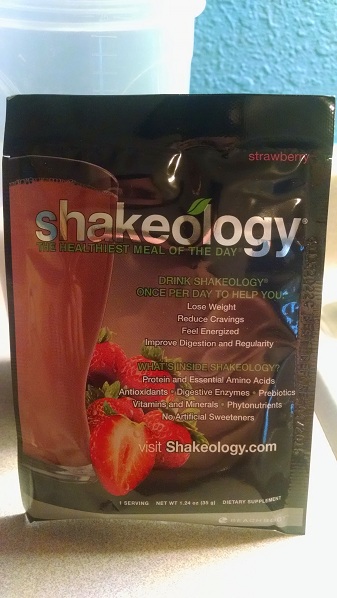 This is the one I hope just tastes like strawberry quik. The powder actually looks more brownish than pink, but when mixed it has a pinkish hue. 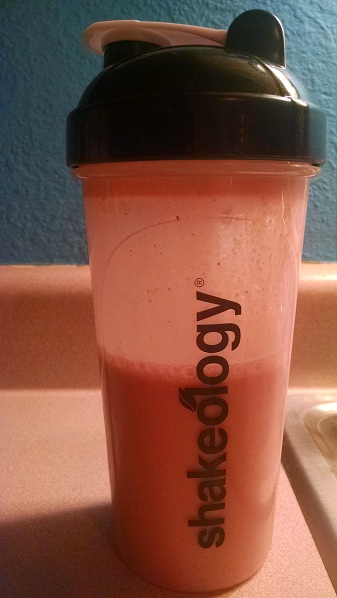 Smell: Definitely has that strawberry scent. Kind of a cross between Quik and Smurfberry Crunch.

Taste: Unfortunately, it doesn’t taste like Strawberry Quik. In fact, it tastes similar to the Greenberry flavor if you ask me. It has a very bitter aftertaste. Almost has that children’s aspirin taste. I’m not really digging this flavor. I guess if I had to choke these down daily, I’d probably mix some real strawberries and banana with it to make a better flavor. However, straight with Almond milk, it tastes like faint sweetness on top of all kinds of bitterness. 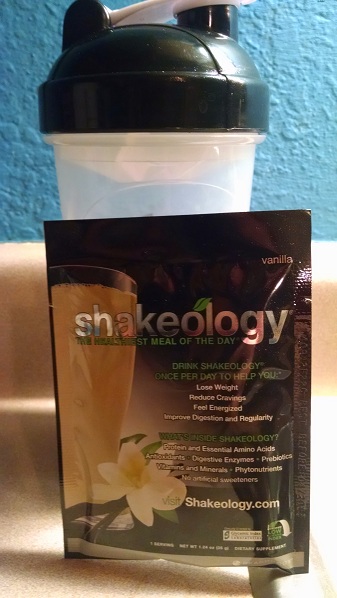 I’m actually a big fan of Vanilla. I prefer vanilla coffee over mocha, I also would rather have a vanilla shake over chocolate. But, lets see how I feel about a vanilla shakeology. 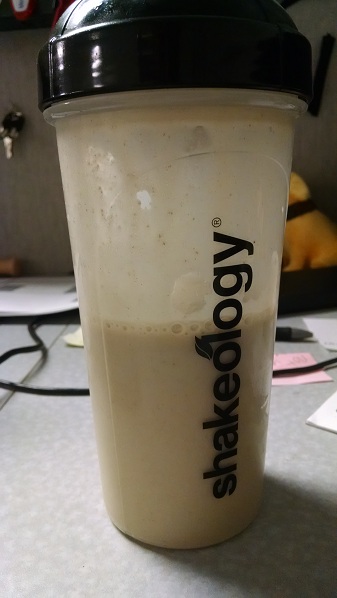 Smell: I really has the creamy scent of a vanilla ice cream. Actually it’s a little strong. Almost like Vanilla Extract.

Taste: This one is definitely pretty plain. You’ve got a slight sweetness, but I can’t quite give you a good comparison. It has a little vanilla flavor, but it tastes more like sweet milk at the bottom of your cereal bowl. I do like this one, though. It’s not offensive, and can probably be combined with anything really easy. 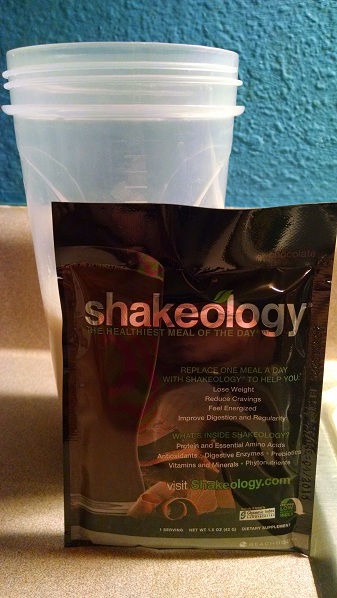 Okay, I have high hopes for the Chocolate. You can’t do chocolate wrong, can you? It looks like a YooHoo! Let’s see if I’ll be saying “YooHoo!” 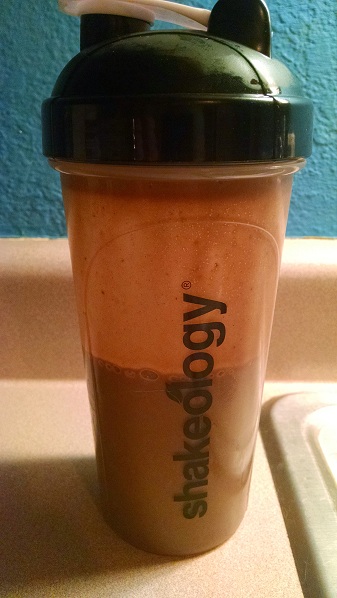 Smell: I keep comparing things to cereal, but this smells like Count Chocula in liquid form.

Taste: Here’s one I can get behind. Since they all seem to have the same bitter aftertaste, it actually kind of works with the chocolate. It’s got the rich chocolate taste, but the bitter aftertaste makes this taste like you’re eating a Dark Chocolate bar. I definitely think we have a winner with this one. Not perfect, but certainly at the top.

The chocolate & vanilla flavors are definitely my picks for the best Shakeology shakes. The best thing about these 2 flavors is they can easily be mixed with other things very easily. The chocolate shake is begging to be mixed with peanut butter or banana. The vanilla would be great with some strawberries or blueberries.

So, there you go. If you are going to get a 30 day supply, I would go towards chocolate or vanilla. But, if you must try one of the other 2, I definitely recommend this “taste sampler” pack before buying a large supply.