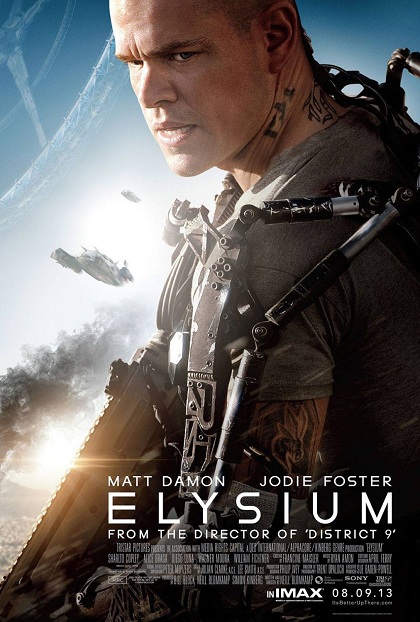 It’s the year, 2154. The earth has become over-populated, full of disease and pollution. The wealthy people didn’t want to change their way of life, so Elysium was built. Elysium is a huge space station with it’s own environment, lakes, trees, etc. They live in huge mansions with Med Beds that will cure any disease, cut or bruise to the human body in mere seconds.

Sadly most humans live on earth, full of poverty. One of them is Max (Matt Damon), he lives in a small little shack in Los Angeles. He works for a company that makes droids. Ironically, he gets harassed on his way to work by some police droids; the same droids that his company makes. Suddenly, during an “incident” He gets stuck in a machine, and gets radiation poisoning. They give him 5 days to live. 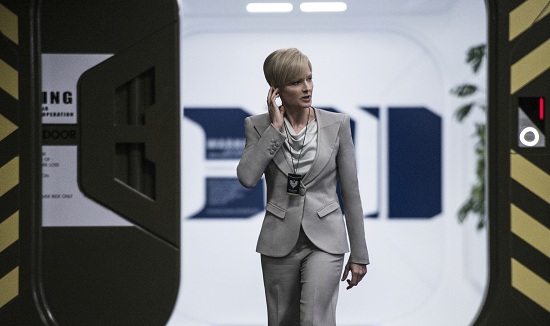 He knows his only way to survive is to make his way up to Esylium and get in one of the Med Beds. He knows some hackers that can give him a fake Esylium ID, but getting up there is a different story. They’ve tried sending people up there in the past, but they end up getting shot out of the sky by the Elysium Secretary of Defense. So, in order to get up there, he has to hack some resident of Esylium’s brain who just happens to be on earth. Will he make it back in time? 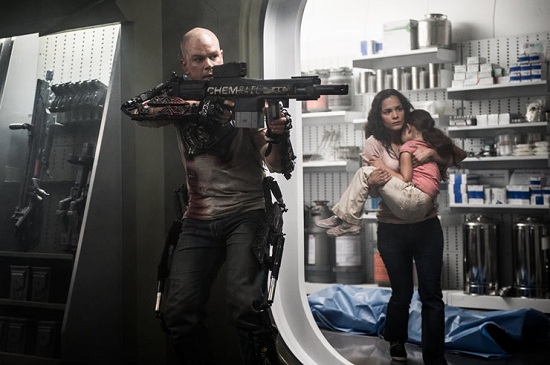 I actually really liked this movie a lot. Neill Blomkamp, the writer / director of this movie also did the movie, “District 9”. District 9 got huge praise, but I really didn’t think it was that great. Perhaps, I have to watch it again. This movie I really liked. The only thing that I thought was weird was people would speak to each other in English, then switch languages for no reason at all. It was very strange. Also, I really liked the flying drones that looked like Roombas. hahah Anyway, I give this a 3.5 out of 4.