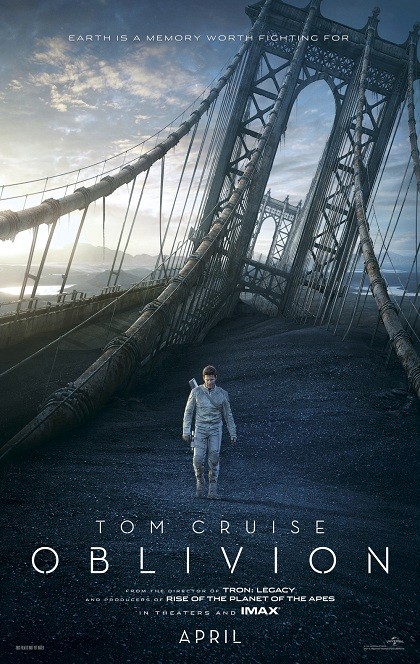 The Summer Movie season seems to start earlier and earlier every year. And today we have a new movie that I would say kicks off the Summer Blockbuster season.

Oblivion takes place in the year 2077. Fifty years ago, an alien race came to earth to destroy it. The earth had no choice but to use nuclear weapons. The humans “won” the war. But, the planet was mostly destroyed. Several earthquakes and insane weather were the results of the nuclear blasts. The moon was also partially destroyed. The human race is now living on Titan, one of Saturn’s moons.

One couple lives on the earth still; Jack and Victoria. They live in a home at the top of a structure way above the clouds. Jack works as a repairman while Victoria stays at home performing “mission control” duties. After the earth was destroyed, humans were given a mandatory brainwash. So, all Jack & Victoria know are each other. 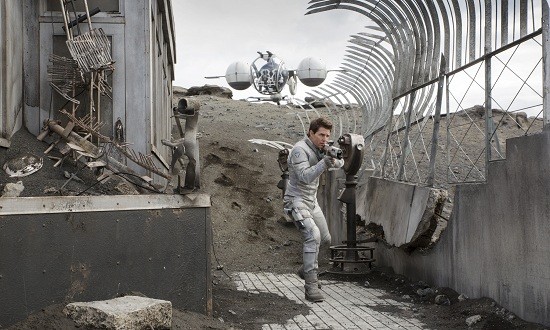 Let me explain. In order to power Titan, there’s huge machines that vacuum up the water from the Earth’s ocean and turn it into energy. Unfortunately, there’s “aliens” still on the planet trying to destroy these machines. So, they have created flying drones. These drones are equipped with sentry guns that will destroy any aliens. Jack repairs the broken drones. 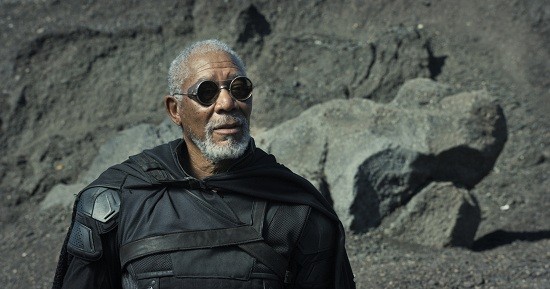 One time while Jack is hunting for a lost drone, he comes about a den with a bunch of “aliens”. But, these “aliens” didn’t attack him. They didn’t even seem hostile. Unfortunately, once the drone spotted them, it sprayed bullets everywhere. Who were these aliens? And why does Jack keep dreaming of a past that he can’t remember? 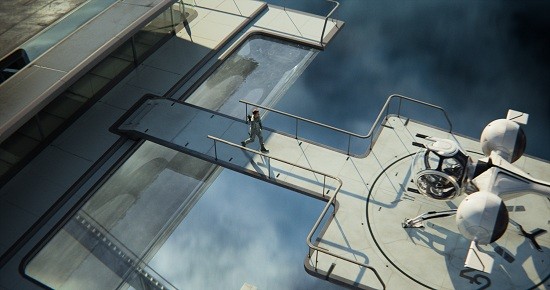 It’s hard to actually explain this movie at all without spoiling it. There’s a lot of mystery that gets spoiled in the trailer alone. Either way, I really enjoyed this movie. This is one of the best sci-fi movies I’ve seen in some time. However, they’re house is reminiscent of The Jetson’s house. There’s lots of mystery here and it really does have you thinking at the end. 4 out of 5