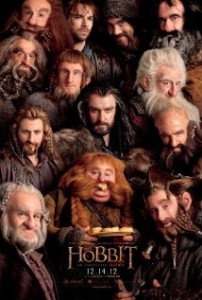 There are two things I want to cover in my review of The Hobbit. Â The first is theÂ story-lineÂ etc. Â The second is the use of HFR and 3D in this movie.

The Hobbit is theÂ prequelÂ to the Lord of the Rings series of books and Movies. Â The Hobbit covers more of Bilbo Baggins’ history and how he comes across The Ring. Â The movie opens with BilboÂ reminiscingÂ about his past and documenting it in a memoir of sorts for Frodo. Â The majority of the first part of the movie takes place in the shire, and we are introduces to a young Bilbo and a younger Gandalf.

Gandalf arrives at Bilbo’s house asking him to join Gandalf on a journey. Â Bilbo is hesitant but Gandalf recruits him unwillingly. Â A group of dwarves start to arrive at Bilbo’s house to discuss the journey and the retaking of their kingdom and gold. Â Bilbo is not keen on making the journey with them because of the danger and unknown involved. Â Eventually curiosity gets the best of Bilbo and he joins the group. 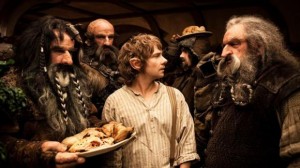 Their journey takes them through the countryside. Â While doing their best to stay safe and avoid trouble they run into a pack of Orc, giant spiders, and they meet a few other wizards too. Â They are even welcomed in to the elfish city for a night to rest.

Bilbo also has his first run in with Gollum. Â GollumÂ unknowinglyÂ drops his “precious” ring and Bilbo picks it up. Â Once Gollum realizes that Bilbo holds the ring, we see Gollum’s true evil side.

I thought the way the movie ended was a bit “blunt” Â It really did not close any plotlines, but rather left it wide open for the second installment of this book.

Now for the HFR and 3D part of the movie. Â HFR stands for High Frame Rate. Â This movie was filmed in a higher framrate they movies are typically filmed. Â There were a lot of stories online of screenings in Europe where people were leaving feeling sick due to motion sickness from the HFR. Â I did notÂ experienceÂ any sickness during our viewing. Â I dont know if it was the HFR or what, but I thought this was the BEST 3D movie I have seen. Â I am not a big fan of 3D movies, but I thought this one played well. Â Some will not like the HFR because it can make things seem a bit cartoonish. Â However the sweeping landscape scenes in this movie were AMAZING.