I’m sure I’ve talked about Christmas Candy at least 454 times already. I don’t have exact count. But, that’s what we’ll be exploring today. With the loss of Hostess, there’s a bare rack at the coffee shop at work. It looks very sad. Instead of putting candles up or setting up an eternal flame, they opted to put Christmas Candy in it’s place. 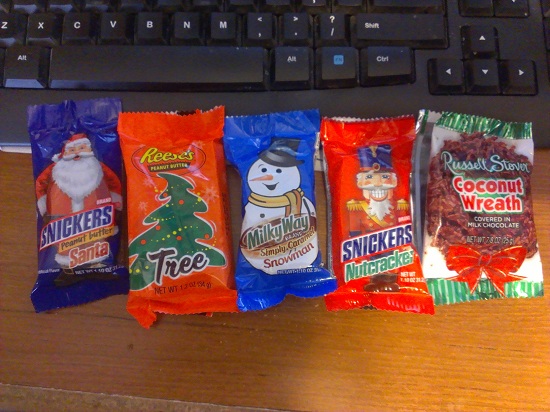 I would say that these candies are larger than bite size or fun size, but smaller than a normal size candy bar. I think the intent of these candies are to fill a stocking. By the way, if your stockings are filled with candy near the fireplace: Make sure you remove the candy before starting a fire. Otherwise, you’ll have chocolate dripping out the toes of the stocking. It’s never welcoming on Christmas morning to reach in your stocking only to hear a chocolatey squish sound. 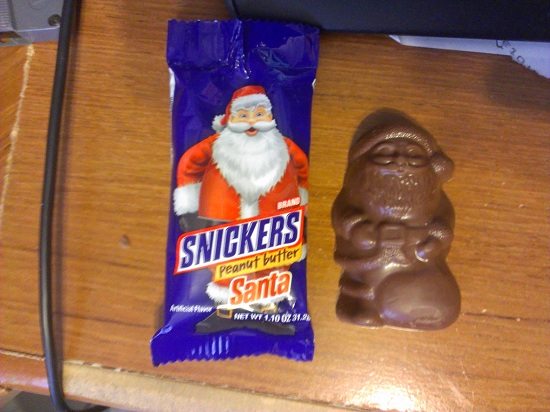 We’ll start with the big guy, Santa Claus. But instead of Snickers giving him they’re original flavor, they opted for Peanut Butter Snickers. That’s a strange choice to me. You’d think Santa should get top billing with the top selling Candy bar. Maybe they assume the Santa name sells itself. So, they’ll be able to get rid of some of their snickers peanut butter filling from the name alone. If you’ve never had a Peanut Butter Snickers before, they’ve replaced the caramel in the bar for peanut butter. Not as good as the original, but not as horrible as a Mary Jane. Lots of detail on this Santa, I’d say it looks better than the package art. 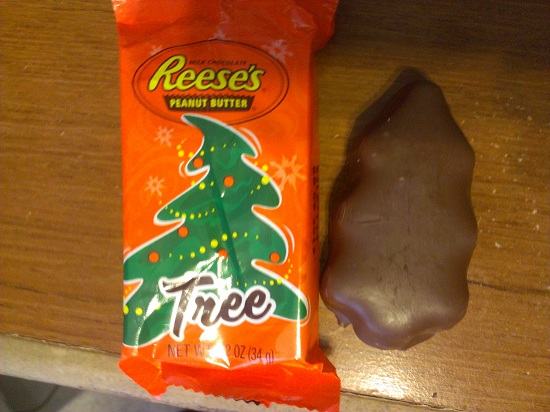 Next up is the Reese’s Tree. I think this is the most popular one of these candies. I know they sell a huge bag full of these things. And you can see they sell these on taste alone. I mean look at that thing. Is that really suppose to look like a Christmas tree? They’ve gotten pretty lazy. If anything, the only thing Christmas-y it looks like is Mr. Hankey. Besides that, it’s just a normal Reese’s Peanut Butter cup. How do you pronounce Reeses? I’ve always said “REE SIZ” but a friend always says “REE SEAS”. I think I’m right, and she’s wrong obviously. But, I’m sure there’s a huge debate on the internet about it, in which I’m too lazy to look up. 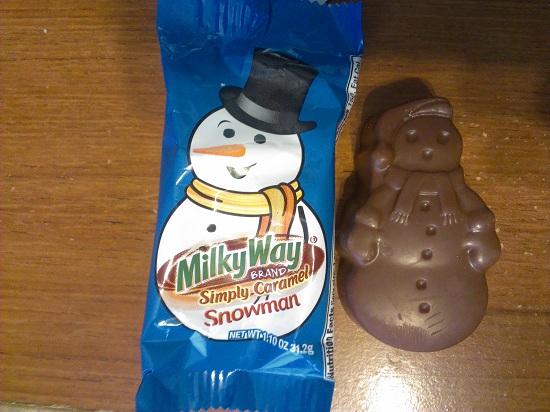 Ahh, Milky Way – Simply Caramel… This is one of my favorite candy bars, and they shaped it like a perfect snowman. Although, the snowman on the package has a top hat and no hands. But, the Chocolate version has a Santa hat and big gloves on. Apparently the art department didn’t talk with the chocolate mold department. Anyway, I was surprised that I didn’t see a regular Milky Way candy, perhaps they were out, or perhaps the Simply Caramel is just selling better. Who knows? Actually, I’m sure the accounting department working for Mars Inc. knows. 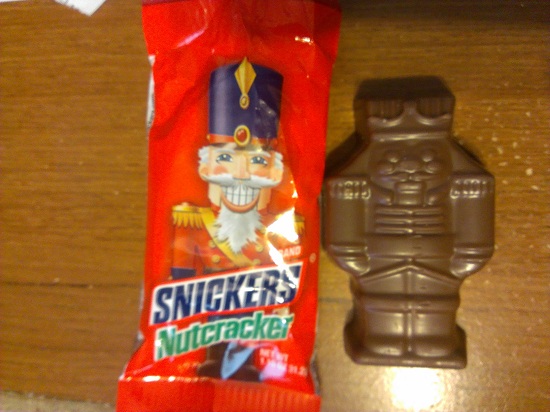 A Snickers Nutcracker? Yep, Snickers put their biggest brand into the lamest symbol of Christmas, a Nutcracker. Of course, I guess a “sugar plum” flavor would not be good. But, thats what would go with a Nutcracker the best, right. Oh wait, Snickers… peanuts… NUTS!!.. Ahh.. Nutcracker. That’s the connection. Anyway, the chocolate detail looks good, and I hope I don’t have to explain what a Snickers tastes like. 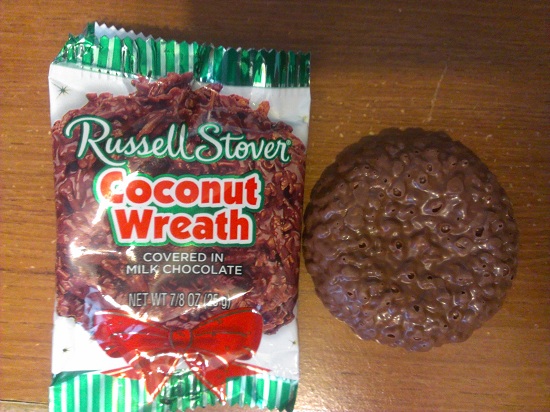 Lastly, I saw a Russell Stover’s box that had Christmas candy as well. So, as a bonus, I got this one as well. From the packaging, I thought it’d look like a wreath. But, their design team were too lazy to even put a hole in the middle of this wreath. Then I was hoping this thing would taste like the Samoa girl scout cookies. No, unfortunately, it doesn’t even taste like a Mounds. You know those Whitman Sampler boxes that old people always have on hand? There’s about 5% of the candy is decent in the box. Well, this “wreath” would be in the 95%. You’re better off just having this one melt in your stocking.

In conclusion, these would make great stocking stuffers and in my personal opinion, I’d stick with the Snowman & Nutcracker.