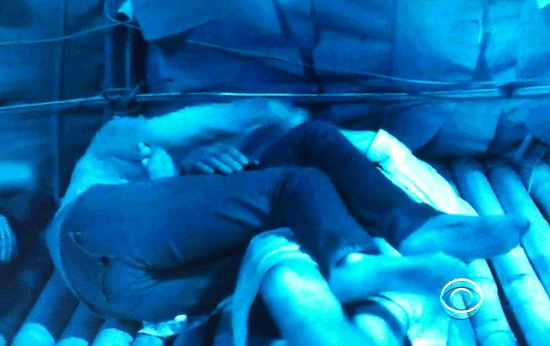 I’m going to try to recap all these episodes, but beware there is many spoilers ahead

Matsing Tribe:
Angie and Malcolm are cuddling to keep warm. Although, Roxy doesn’t buy it. She thinks they need to be voted out. I think there’s more there as well. At least I think Malcolm thinks its more than simply keeping warm. The way Russell talks about it is hilarious. Doing a little slap and tickle. You need to “wack” that thing down right away. Was he intentional with the double entendres? Anyway, Roxy really wants to get rid of Angie.

Everyone is really bummed that it’s raining so much. Roxy starts breaking down crying. People are noticing she’s not working. Russell talks her down off the bridge. She talks about her “litrally” having nothing. You know, I hate people that use literally too much, and I especially hate it when they mispronounce it. Vote her off now! Eventually, the sun does come out though, and she starts praying at speaking in tongues.

Denise says she’s respectful of Roxy’s religion, then immediately starts saying that she would never pray for anything. And basically starts hating on Roxy’s beliefs. Of course, this was behind her back to the cameras. 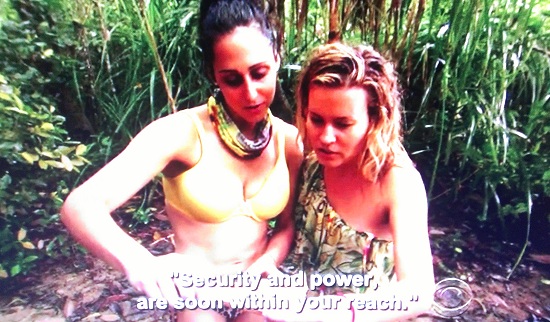 Tandang Tribe:
RC found the clue inside the bag of rice. She told Abi about the clue, but only because she saw her find it. Abi is very paranoid about RC, and thinks she’s making other alliances. I say get rid of her, she’s crazy.

Lisa is very shy and she disappears from the tribe. People think she’s looking for the idol. She’s really just not good with others and she wants to be on her own. I thought it was kinda strange how all of a sudden when she was crying, they put up the hashtag: #survivorbreakdown. Seems a little messed up. Maybe when Abi was acting weird they should of put up the hashtag: #batshitcrazy. 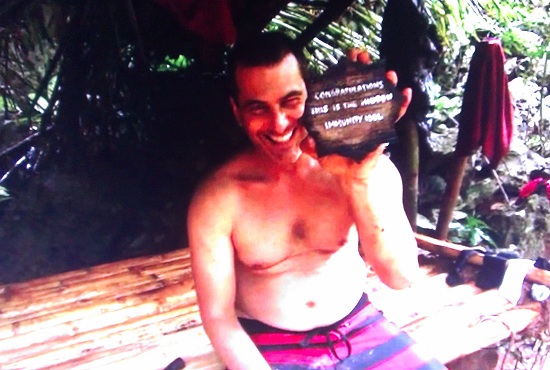 Kalabaw Tribe:
Jeff’s knee is really messed up. But, he’s nursing it along. Jonathan can’t search for the hidden idol because of the “damned rain”. Luckily, the rest of his tribe decides to take shelter in the cave. While they’re doing that he scrambles all over the camp looking for the idol. A couple of the girls come back at one point asking what he’s looking for, he says his glasses, because he lost a contact lens. Finally, he finds the idol, right on top of the rice container. I wonder if Jonathan is going to start wearing glasses all the time to put on the charade of losing a lens. Or just forget it. And, will the rest of the tribe notice. 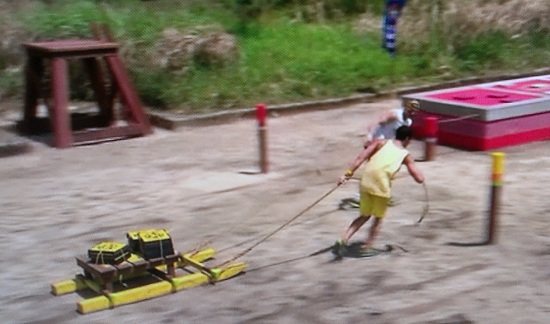 Immunity Challenge:
This challenge is pulling a sled with puzzle pieces to a board. Then there’s one person calling out how to place the puzzle pieces. Kalabaw is the first one back with the puzzle, followed by Tandang then Matsing.

Tandang won the challenge, because they worked together as a team. They won immunity plus blankets and a tarp. Kalabaw got 2nd place, got immunity plus a tarp. Matsing fell short again. They have 2 weak players Angie and Roxy, which really seemed to kill them. They can’t seem to get together as a team in challenges. Russell throws a hissy fit and throws one of the puzzle pieces. Then he starts talking about how bad his team is. He blames everyone except himself.

Scrambling by the Matsing tribe:
Roxy starts yelling about Angie, even though she’s just as guilty. She’s saying she’s the weakest link ever. But, she’s so freaking loud Malcolm and Angie can hear them. They all are giving Angie too much credit. I think they think she’s some freaking genius trying to play Malcolm. I really think she has no idea. 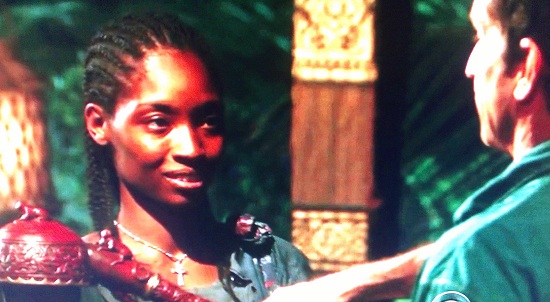 Tribal Counsel:
Roxy is busy rolling her eyes through the whole tribal counsel. She really is blaming everyone except herself. Meanwhile, Angie says if she could have anything on the tribe, she’d have cookies. Jeff totally makes fun of her. Several eyes are rolling. This tribe hates each other. Roxy is so bothered by Angie and Malcolm snuggling. Roxy is very pissy through the whole tribal. She’s just trying to get the crosshairs off of herself, since she’s worthless around camp.

I actually had no clue how this tribal was going to go. But at the end, Roxy was voted out. I really think they made the right choice. She’s was bringing the tribe down.