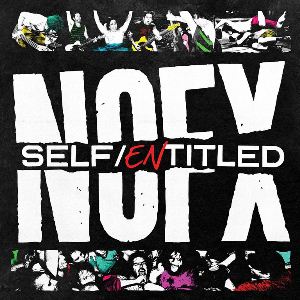 NOFX have released their 12th studio album today. They have been my favorite band since around the mid-90s. Back in the mid to late 90s, my musical tastes were mainly punk rock. If a song was played on the radio, I stopped liking a band. Anything that was popular was uncool. Yeah, my tastes have changed. I still like punk, but I’ve grown to accept some bands that are played on the radio, and I’ve gotten into another indie scene; nerdcore. Through it all, I’ve always kept NOFX at the top of my favorite bands list.

NOFX is known for their clever titles to albums (Punk in Drublic, Heavy Petting Zoo, Pump Up the Valium) and they do the same with this one, Self-ENtitled.

One of my favorites songs is a “sequel” to the song “We Got Two Jealous Agains”, which appears on their “War on Errorism” album. The original song is about how him and his wife met, and they had such similar tastes. So, when they merge their album collection, they have several doubles. “Jealous Again” is the name of an album by Black Flag. The new song called “I’ve Got One Jealous Again, Again”. You see, Fat Mike has gotten a divorce a couple years ago. This song is about him getting all his records back, and her keeping the house. It’s kind of a jab at his ex, but to me, it’s pretty funny.

This album clocks in at a quick 30 minutes, but it packs a lot. It’s an election year, so you’re going to hear some of they’re political views sprinkled throughout the album like Ronnie & Mags and This Machine is 4. The song Secret Society sounds like it was pulled right from Bad Religion’s catalog (which is a good thing). For the most part this is a good mixture of the fast, funny, & cynical songs that we’re used to hearing from NOFX. I really enjoyed it. And I recommend it.