So, I just found out the other day that all Troma movies are now available free of charge to view on YouTube. You can check out their channel here. I remember in about 1998 or so, the had a sale on Troma’s website. Every DVD was only a quarter. This was unheard of at the time, especially since it was a fairly new technology. Plus, movies were around $20-$25 bucks. So, I bought about 12 movies, which came to about $8 bucks after shipping. Pretty much all of them are pretty cheesy, but they all are very interesting. I got movies like “Tromeo and Juliet”, “Class of Nuke’em high”, “Toxic Avenger”. All of them weren’t winning any awards, but they were great indie horror films. 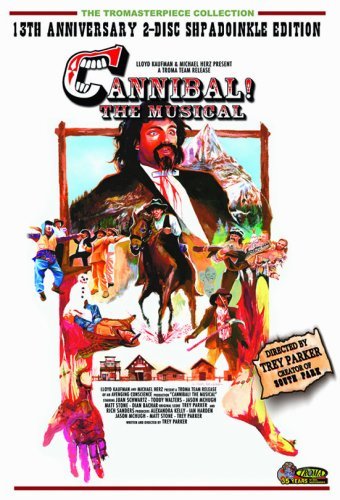 One of my favorite of their movies is definitely Cannibal: The Musical. However, Cannibal wasn’t even a true Troma film. It was made by Trey Parker & Matt Stone (of South Park fame) then later distributed by Troma.

I was a huge South Park fan in the early years. I ended up buying bootleg copies of “The Spirit of Christmas” (the one vs Frosty, and the one vs Santa) and also a film made by them, “Cannibal: The Musical”. I didn’t know what to expect. All I knew is that is Trey and Matt were involved. So, I gave it a try.

Cannibal: The Musical became one of my favorite movies at the time. It’s about Alfred Packer (Trey Parker) leading a bunch of pioneers through the Rocky Mountains in search of gold. Unfortunately, they’re exhibition takes longer than expected. Winter comes along, so without any food they have no choice but to result to cannibalism. The songs in this movie are simply hilarious and catchy as hell. I still have never been able to get the songs “Lets build a Snowman” or “It’s a Shpadoinkle Day” out of my head. Anyway, check out this movie, you’ll love it..

2 thoughts on “Cannibal: The Musical”