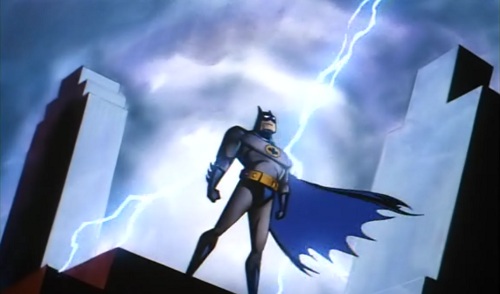 Batman has made his way to tv in several ways before, from the “campy” 1966 version to the animated version in Superfriends. He always seemed like the writers wanted to make the “Dark Knight” more light and fluffy. I mean Batman & Robin almost have as many guest appearances on Scooby Doo as the Harlem Globe Trotters.

After the success of Tim Burton’s Batman movie from 1989, they started work on a “cartoon” version of Batman. In 1992, Batman: The Animated Series was launched.

Batman: The Animated Series was like no other incarnation of Batman. The show as very dark. The use of shadows and the darkness were used frequently for Batman to hid in, and criminals to mastermind their schemes. Instead of the Joker robbing a bank in the middle of the day like they would in the old Superfriends cartoons, they hid in the dead of night, in abandoned warehouses, and dark alleys. 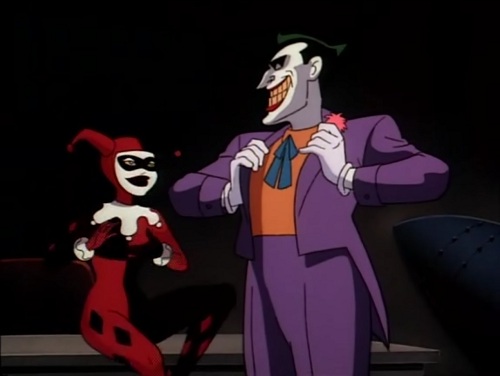 There was nothing corny or campy about this version of Batman. Many of the stories were taken right from the pages of the comic. All the familiar and unfamilar bad guys made their appearances. And they even created a character that was embraced by fans, and is still around today.

Harley Quinn was that character. She played a psychiatrist, Harleen Quinzel, from Arkham Asylum that was manipulated by the Joker, and fell in love with him. She took on the persona, Harley Quinn and soon became The Joker’s right hand girl.

The series also changed the whole origin story of Mr. Freeze which has become the standard. Above you can watch Mr. Freeze’s reason for his obsession with the cold in “Heart of Ice” Instead of being a standard crazy villian, he’s more complex, having a wife with a terminal illness.

One of my favorite episodes of the series is called “Perchance to Dream”. Bruce Wayne wakes in the morning only to find the Batcave missing, Alfred knowing nothing of his “alter ego”, being married to Selena Kyle, and his parents are still alive. He finds himself very confused, especially when he see’s Batman, and wondering who it could be. Without ruining it for anyone who hasn’t seen it, it has many twists that you just wouldn’t find in a normally Saturday morning cartoon. This is also the episode in which I learned that people can’t read in their dreams. Did you know that? 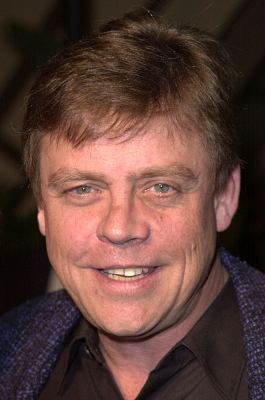 The series also brought forth the best voice-over for the Joker, Mark Hamill. Yes, he is the same guy who played Luke Skywalker. He’s basically been doing the voice on just about every video game & animated versions. He’s become the standard. Sadly he said he’s not doing the voice anymore. However, he said he will do it again, if they do an animated movie of “The Killing Joke”. I’m sure they’re starting the work on it right now.

So, if you’ve been living under a rock and have never seen any episodes of Batman: The Animated Series, check out the few episodes they have on the WB’s website, then find the rest on DVD. You won’t regret it.