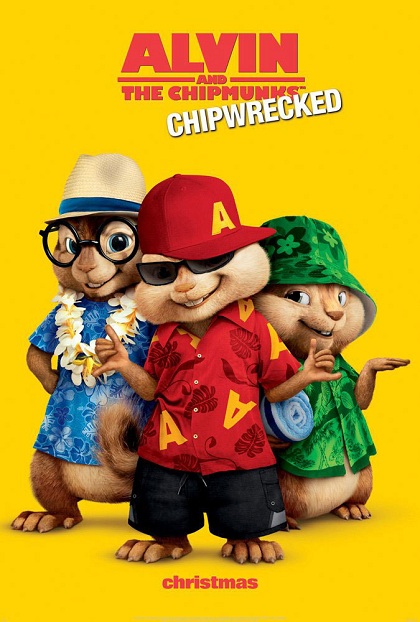 Chip Wrecked is the latest installment of the Alvin and the Chipmunks series. Â This time the Chipmunks, Chipettes, and Dave (Jason Lee)Â are taking a family cruise before they head to the International Music Awards. Â In true Alvin fashion, Alvin is having a lot of fun on deck of the Carnival Dream. Â They have several dance parties and cause a bit too much mischief, and are told to goto their stateroom, and NOT LEAVE. Â Dave is selected to have dinner with theÂ captainÂ of the ship, and he attempts to smooth things over. Â However, the ships mascot, a pelican, is doing his best to mess up Dave’s dinner by spilling HOT gravy on his lap. Â Dave has to leave dinner early to clean up and runs into the Pelican on deck, and the man in the Pelican turns out to be Ian (David Cross), the former manager of the Chipmunks and Chipettes. Â He vows to ruin their trip in retaliation for “ruining his life”.

The next day Dave and the “kids” are trying to relax on deck. Â Dave falls asleep and the chipmunks get mixed up with a kite and fly off the ship. Â Dave wakes up to see the chipmunks flying away and gets the ships handglider in an attempt to rescue them. Â Ian tries to stop Dave and ends up flying off the ship with Dave on the handglider. Â The chipmunks wash up on the shore of an island and start to make a new home, making the best out of the situation. Â While exploring the island they run into a woman who has been on the island and she helps them survive. Â However, this woman is hiding something from the Chimpmunks and tries to use them to her advantage.

Over all this is a really good movie for kids. Â We were very happy there wasn’t any questionable humor. Â There were a few jokes that only adults will get, like a reference to the youtube video Double Rainbow, and the Honey Badger. Â I was also impressed with the soundtrack for this movie. Â The Chipmunks and Chipettes do several duets and covers of several recent popular movies.

Does Dave find the Chipmunks? Â Does Ian ruin Dave’s life? Â Do they make it off the island? Â You will want to see this movie to find out!

0 thoughts on “Alvin and the Chipmunks: Chip-Wrecked – Review”