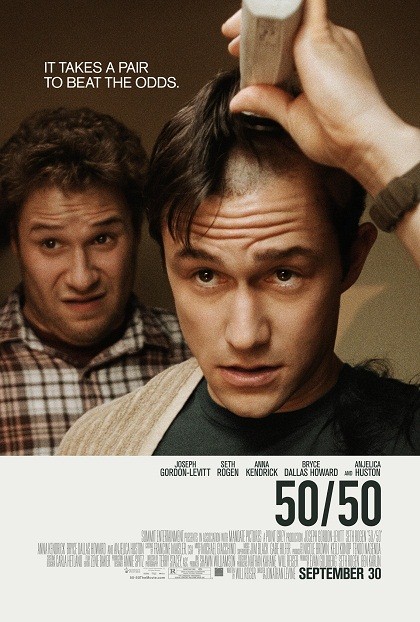 50/50 is the story about Adam (Joseph Gordon-Levitt) in his late twenties. He’s a very healthy guy, doesn’t drink, smoke, do drugs, etc. He has some back problems, so he goes to the doctor to find out that he has a tumor on his spine. He looks up information on the cancer on webmd.com, Neurofibrosarcoma and Schwannoma. He finds out that there is a 50% survival level.

This story centers around how he deals with cancer and how his life changes. Kyle (Seth Rogen) is his best friend. He shows him how he can use cancer to get women. Actually, Kyle, ends up using it more of a way to get women than Adam does. Adam makes friends with other cancer patients while getting Chemotherapy. That’s where he learns the more letters in the cancer you have, the worse off you are. 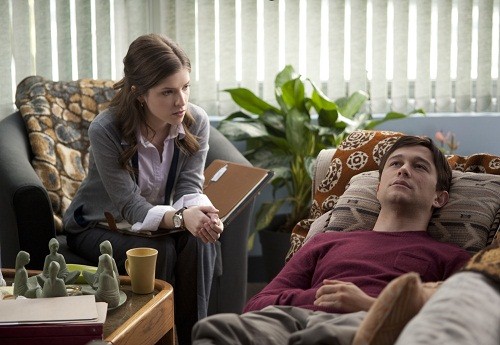 Adam’s mother is worried so much about him. She already has to deal with his father who has Alzheimer’s. Now she’s afraid she’s going to have to take care of him as well. He assures her that he’ll be okay.

He also gets close to a therapist (Anna Kendrick). She’s young and very new at her job. He makes him a little apprehensive about the whole thing. But, she ends up being a great addition to his support team. 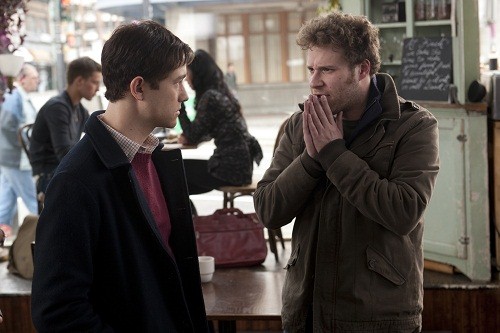 This movie is actually based off a true story. Will Reiser and Seth Rogen worked on the HBO comedy “Da Ali G Show” together. That’s when Will found out he had cancer. They thought it’d make a great movie. In fact the MRIs in the movie are actually Will’s real MRIs.

I really enjoyed this movie. It’s an uplifting movie. It’s a great buddy comedy mixed with a serious subject. How many comedies do you know that put “cancer” as there’s main subject? It’s a great movie that just shows how life can get really scary, but you’ll be fine with great friends and family around you. 4 out of 5.