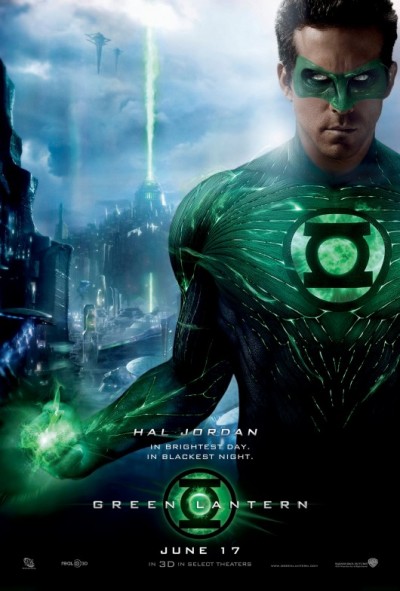 I had the pleasure of seeing “Green Lantern” the other day at a pre-screening. If the amount of people there is any indication, this movie will make a lot of money. Although, with several choices this Summer, I doubt any movie will hold the #1 spot longer than one week. Especially, since Pixar is releasing Cars 2 next weekend. Anyway, let’s get to my review.

Let me start by saying, you can throw just about any comic book movie at me, and I’ll probably like it. Of course they can be on either side of the spectrum. Dark Knight was up there as one of the best of all time, Hulk on the other hand, was a snoozer, if you ask me.

I went into Green Lantern not really knowing much about his origin/back story. So, if they didn’t stay true to the comics, I couldn’t tell you. Let me set you up with the gist of it. There’s several “Green Lanterns” all over the universe. Each of them are in charge of protecting a designated sector of the universe. One of the Green Lanterns (a purple dude) was attacked and crash lands on earth. He realizes he’s going to die, so he tells the ring to find the next Green Lantern. Oh yeah, every Green Lantern has a power ring, which can create anything you can imagine (eg: swords, guns, a giant fist, a turkey sandwich). But, with this ring you gotta keep it charged by holding it to a lantern. Yep, you have to keep it charged like a cell phone. The ring chooses the ace pilot, Hal Jordan. He meets all the other “Green Lanterns” and is told about the ring’s power and how to use it. After the meet and greet, we find out about an alien that is feeding off the “fear” to destroy the Lanterns… and trouble pursues.

I had the “pleasure” of seeing this movie in 3D. Surprisingly, I thought the 3D looked pretty damn good, even though I was sitting in the 3rd row. Of course, the 3D looked the best when they were in space or on an alien planet. It didn’t really work too much in a daylight scene on earth. I’m still not convinced that 3D is all that necessary. I could have did without it.

The movie itself was good, but nothing really blew me away that much. Most of the story except for the origin was pretty predictable. I would have liked to see him do more with his power ring. Also, the story was a little slow in spots. But, It’s an enjoyable movie nonetheless. Be sure to stay after the credits for another scene. You’ll only have to wait through half the credits to see the extra scene.