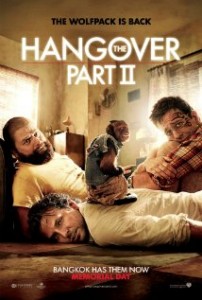 Greg and I were allowed to attended and advanced screening of The Hangover Part II, and this is my review of it. Â While we were waiting to enter the theater we noted the wide variety of indivuals attending the screening. Â To me, this movie appeals to the 20 and 30 something crowd that likes to go out and have fun. Â Who we saw waiting to see the movie was a very wide cross-section of social status, and life stages. Â Of course you had your 20 and 30 somethings, but you also had elderly adults that required the assistance of O2 and walkers, I guess this movie appeals to a much wider crowd than what we thought.

The story line of the movie is that Â Stu (Ed Helms)Â is getting married to Lauren (Jamie Chung) in Thailand, and the guys throw him a party none of them will remember. Â Being in Thailand the guys get into a lot of trouble and manage to misplace Teddy (Mason Lee), Lauren’s sister. Â There is added drama because Lauren’s father (Nirut Sirichanya) absolutly HATES Stu.

Overall, The Hangover II delivers all the jokes with a lot of flair and hit all the marks. Â Like the first Hangover, I was laughing during most of the movie, although it did take a bit to get the juices flowing. Â Totally worth seeing!

Below is Â a more detailed review. Â ***Warning Spoilers***

Hangover Part II had to go above and beyond the original to get the same laughs. Â The original was “ground breaking” because most of the the jokes and situations had not been done before so there was Shock and Awe. Â The writers and director knew that to get the same Shock and Awe in II they had to go over the top, and they did. Â Some of the situations the guys got put in were raunchy but freaking hilarious! Â There is a scene where Stu, Phil, and Alan are trying to figure out what happened the night before and they are in a strip club talking to one of the strippers. Â Come to find out Stu really has a thing for strippers, and had sex with the stripper. Â Problem is, the stripper is a transvestite. Â Once Stu figured it out the look on his face was priceless.

The stripper scene also brings me to my one complaint about II. Â I got the impression that the writers took the script and plot from I and just changed the location and scenarios and shot the movie. Â Meaning, the movie revolves around a bachelor party gone wrong, they were drugged and don’t remember the night. Â In the first they wake up with a tiger in their room, in II they awake with a monkey in their room. Â In I they wheel the tiger down the hall of the hotel under a sheet, in II they carry Chow’s dead body down the hall under a sheet. Â In I they are confronted by Mike Tyson looking for his tiger, in II they are attacked by guys on a motorcycle looking for the monkey. Â The list could go on. Â However this did not ruin the movie for me, I still think the movie was great and worth watching. Â I actually think it was done on purpose because one of the lines in the movie was “it happened again”.

Like I said before, it is worth seeing. Â You will laugh your ass off.

BTW Mike Tyson does appear in the movie singing One night in Bangkok.