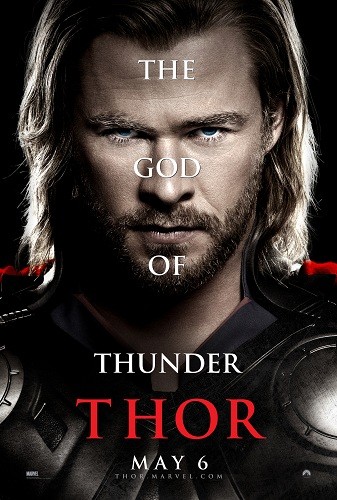 The first in a summer full of huge comic book movies has been released. Thor is here!

I went in the movie with pretty much no knowledge of Thor. The only thing I knew about Thor, I learned from “Adventures in Babysitting“. I know he’s some sort of God and he has a hammer. That is about it. So, I was excited to see his Origin story.

The first part of the film takes place on Thor’s home planet, Asgard. Â he’s about to get the King’s throne passed down from his father. Â During the ceremony, a nearby ice planet tries to start a fight. Â The ceremony is postponed. Â Instead of honoring his father’s wishes, Thor & his warrior friends go to the ice planet to fight.

There was a peace treaty among Asgard and the Ice Planet. Â So, his father was angry! Â He banished Thor from Asgard, and put a spell on his hammer. Â He wouldn’t be able to use the hammer until he was true of heart. Â So, Thor is sent to Earth, never to return to Asgard.

The movie really picks up when he’s on Earth, where he meets Natalie Portman. Â I’m not going to give away the whole movie, but it gets humorous in spots. Â Thor is pretty strong, but without his hammer, he can’t pack his normal punch.

I was actually reallyÂ surprisedÂ how much I liked this movie. Â I figured a hero that was a “God” wouldn’t be that compelling. Â But, they really did a good job with this movie. Â Also, they tied it in with the other “Marvel” movies. Â It’s making way for the “Avengers” movie coming out next Summer. Â Be sure to stay past the credits if you see this, you get a bonus 5 minute scene.