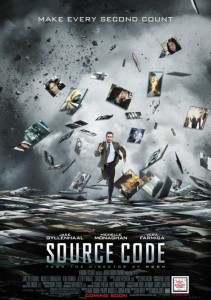 I ended up going to the movies twice this weekend. Yesterday I saw “Source Code”.

In skating around with giving away some spoilers, I’ll just tell you about the plot. Source Code is about a guy, Colter Stevens, who is put into a “source code”. The source code can take you back in time 8 minutes in time. Colter is put on a train which which is blown up by a bomb. He has to keep reliving the last 8 minutes before the bomb explodes, to find out who did it.

It’s kinda similar to Groundhog Day, whereas the main character must relive the event over and over again until he gets it right. Although, there is no scene involving a stolen groundhog.

The movie has several “surprises” along the way. In fact, make sure you don’t have to go to the bathroom during the movie, you may miss something. haha.. I totally recommend this movie, it’s a fun ride!