So, you had to save a lot of money, if you wanted to collect the whole series. Things haven’t changed. The new GPK Flashback cards are now $1.98 a pack. But, you get 8 cards instead of 5. Although, it doesn’t come with gum. Do any trading cards come with gum anymore? I mean yeah, the gum was usually hard as a rock, and its flavor lasted about 12 seconds. But, I want it! Anyway, lets get to the cards… 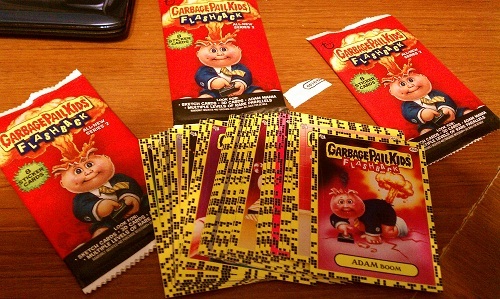 Apparently, this is series 2 of the GPK Flashback cards. I was excited to see them at Walmart. Normally I wouldn’t even be near the trading card section, but I was with my brother. No, he’s not a collector of cards either. He was buying a “Webkinz” for his girlfriend’s daughter. Webkinz must be an impulse buy or something, otherwise they’d be back by the toys instead of by the checkout aisles.

So, what’s new with these Garbage Pail Kids? Nothing! Well, not exactly. You see most of these cards are recycled from the original run of GPK from the 80s.

Speaking of the 80s, did you realize there was a GPK cartoon? Well, there was and there wasn’t. If you lived in the US, like me. You never saw it. Back in 1987, a GPK cartoon was set to run on CBS after Muppet Babies. Unfortunately, the weeks prior to it, several parental groups started making a fuss. Several sponsors threatened to pull out. So, instead of seeking the GPK cartoon in the US, we saw another half hour of the Muppet Babies. You can find episodes on Youtube, and it’s also available on DVD. It’s really bad. So, we really didn’t miss anything. You can watch the intro here or sit through an ad on the video above.

Where was I? Oh the cards / stickers. Whatever you wanna call them. Did anyone ever use these as stickers? Anyway, like I was saying, most of the cards are re-runs of old cards. There’s a couple of cards that are brand new, and there’s some that were drawn back in the 80s but never released.

There’s still the puzzle cards on the back of several cards, along with a parody of facebook called “fakebook”. Below is a gallery of the cards I got. Enjoy!