One of my favorite foods I like to eat is cereal. I love the cereal aisle. When a new cereal comes out, I have to try it! Examples are here, here, here and here. Anyway, today, I didn’t find really anything interesting down the cereal aisle. I did see a couple new “healthy” cereal choices for the new year, but those weren’t for me. When I went down the candy aisle I found these…. 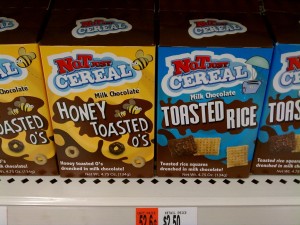 A product called “Not Just Cereal”. I have no idea if it’s new or not. But, any kind of chocolate covered cereal, had to be added to my shopping cart. There were four flavors: Honey Nut Cheerios, Rice Chex, Cinnamon Toast Crunch & Fruit Loops. Well, they used generic names, but that exactly what they were. 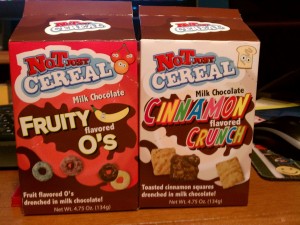 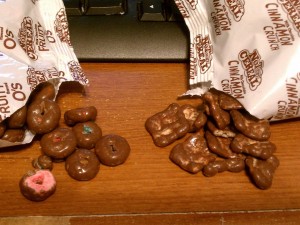 I tried the “fruity flavored o’s” first since I thought they would be the strangest tasting. Yes, I was right. There’s a reason they don’t make chocolate covered sweet tarts. An artificial fruit covered in chocolate just doesn’t taste right. In Fact, it’s downright awful. Anyone want a partially eaten bag of these?

Up Next was the “Cinnamon flavored Crunch”.. This stuff is much better. I actually think cinnamon toast crunch is my favorite popcorn cereal. You can actually put it in a bowl and eat it like popcorn. Add chocolate on top, and BANG! It tastes even better!

So, I recommend the Chocolate covered Cinnamon toast Crunch, but the Fruit Loops should remain on the store shelf.

One thought on “Not Just Cereal”