Every time I go to the store and see weird foods like ketchup flavored potato chips or mint chocolate chip pizza, I have to give it a try. Variety is the spice of life. Well, today is no different. Jolly Rancher has released 2 of their flavors to a liquid form. 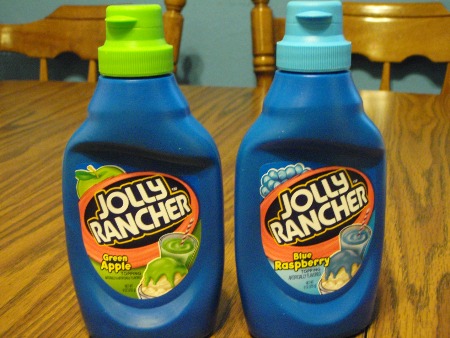 Introducing Green Apple and Blue Raspberry Topping. They come in squeeze bottles just like hershey’s chocolate syrup. I’m going to try both flavors on Milk and on ice cream. 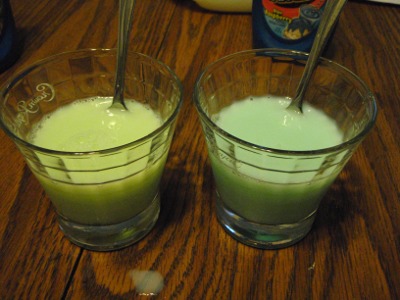 The Verdict, in Milk…

Blue Raspberry – It’s very strange. To me, it almost makes the milk taste like sour milk. It’s not very good. It doesn’t mix well together. But, it is a cool looking blue color.

Green Apple – Again, it’s not a flavor that should go with milk. It doesn’t taste as bad as the blue raspberry, but it’s still not delicious. I tastes like milk with a hint of apple.

Well, the milk test failed. Srawberry or Chocolate are the only flavors that blend well with milk. These flavors just need to remain in kool-aid and candy form. 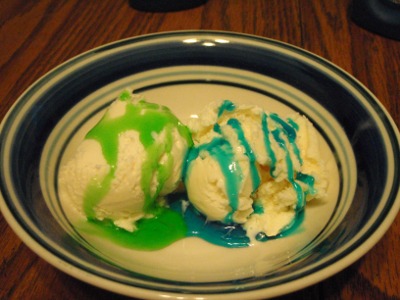 The Verdict on Ice Cream –

Blue Raspberry – This is much better on Ice Cream. It is very similar to a Fruity Concrete or DQ Blizzard. The flavor is very faint, though.

These are pretty good on ice cream, but they still don’t beat chocolate, fudge or caramel. Actually nothing beats caramel in my opinion. These are definitely a novelty, but I doubt they’ll stick around that long, because all the really did was make my ice cream sweeter. But with very little flavor.

In wrapping up this wacky review, I would say I’m definitely not in the demographic for these flavors. I’m sure any kid 10 and under would love these. On the other hand, mine will remain in my fridge, forgotten for about 4 years, then thrown out.