Okay, so I’ve really been lazy lately when it’s come to the website. I need to get back into the swing of things. I haven’t even written a full article since September. Wow! So, anyway, I’m making a goal for myself this week to write a brand new article.

Anyway, the other day, I was digging through my closet and I found this: 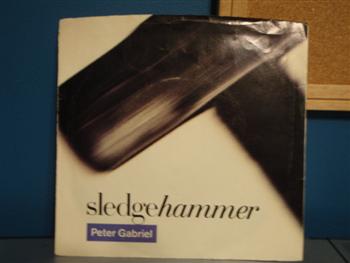 It’s the 45 Record of Sledgehammer by Peter Gabriel from 1986. As far as I can remember, this was the first record I bought. Back in the day, they would put out a single for a record. The single would come on a 45, which was a smaller record, than a full LP. Also, it’s what speed you would put your turntable on. The full LP albums would play at 33 RPM, the smaller, singles would play at 45 RPM. 45’s lost popularity when CDs came out, and singles started coming out on cassette singles. But, in the mid-90s to present, they made a comeback in the punk/indie community. Now they are called a 7 inch. I have about 100 or so 7″ records from my punk phase.

So, yeah, my first record is kinda lame. Hey, I was 8 years old. The video for sledgehammer was weird & awesome at the same time. I couldn’t get enough of the song. Of course, the B side was “Don’t break this rhythm”, which I don’t think I’ve ever listened to all the way through. I guess I was lucky to have an older brother who got a lot of records & cds. I normally didn’t have to buy anything, I’d just tape his stuff. It’s a good thing too. Now, I only have a few embarassing albums sitting on my shelf instead several hundred. haha, Jeff!

One thought on “My first record”