Anyway…. Since it was a long weekend, and I haven’t posted anything in quite a long time, I thought I’d thought I’d tell you about a couple of things I did exciting this weekend (as if anyone really cares). 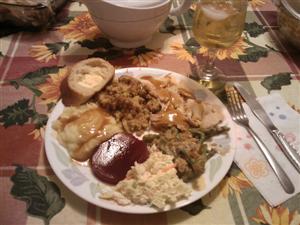 Thanksgiving was wonderful! It was so nice this year. There are ups and downs of being in a relationship. But, since this year, I’m not in one, I didn’t have to drive all over the place. I just had one stop, my parents house. We normally don’t have a huge group of people at Thanksgiving. There was only Mom, Dad, my brother, Jeff; my nephew, logan; and me! On the menu was the traditional Turkey, gravy, mashed potatoes, stuffing, green bean casserole, cranberries, cole slaw, and to drink: some sparkling apple cider. I missed the corn on the cob, but I lived without it. Everything was great, and there was a lot of it, which meant I got to bring home leftovers.

While leaving, I told my brother, Jeff, to meet me at my house at 4am. You see, we were going to take advantage of some Black Friday sales. In fact both items we were getting (confidential until after christmas) were a present for Mom & Dad. You see, Jeff is known for being late. He’ll say he’ll be over in 10 minutes and he’ll show up an hour later. So, I drilled it into his head to be at my house at 4am on the dot! He agreed.

I wake up hearing loud banging coming from the other side of the house. First I’m a little concerned thinking the worst, like someone’s trying to break in to the house or something. Then I turn and see my alarm clock. The time says 4:08am. Oh shit! It’s Jeff! I overslept. I let him in. He starts laughing saying that he’s never going to let me off the hook for this one. He actually made it on time. So, I slipped on some clothes, put on a hat, brushed my teeth, grabbed my coffee, and was out the door. All of this in 5 minutes. 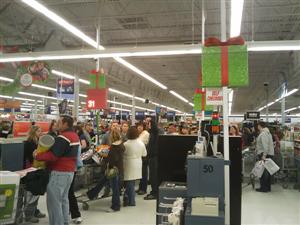 Well, we got there and it was crazy. Luckily the ‘sales’ didn’t start until 5am. Jeff got in a line for the ITEM for Dad. I got in line for the ITEM for my Mom. It was about 1 hour for me to get what I needed. You see, I had the buy the ITEM in the Optical Center, in front of the store. They wouldn’t let you do more shopping and pay at a normal register. 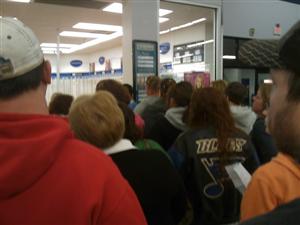 While I was waiting in line, Jeff called me on the phone wondering where I was. I told him how I had to wait to pay for the thing. Apparently everyone was paying with checks or bogus credit cards, because it was taking forever. It took me a total of 30 seconds to complete my transaction.

It was totally crazy there. We ended up getting some pancakes at Cracker Barrel after Wal-Mart. Then, Josh, Lori, & I went out to other black friday sales. I ended up getting about 89% of my Christmas shopping done. I’m usually the person out in the store on December 24th, still trying to find that last minute gift. Hopefully, not this year. 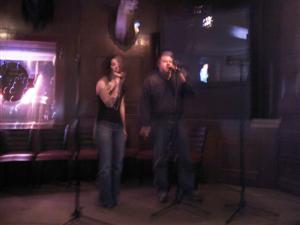 On Saturday, I met up with a few family members for a Karaoke birthday party for my cousin, Jim. It was a pretty good time. And for once, Jeff got on stage. It was a miracle. I’ve never seen the guy up on stage. It must of been the several beers in his system to give him some courage. I sang about 5 songs. Luckily, I don’t have any video this time.

So… did any of you guys do anything exciting on this long weekend?