Well, it’s been a long Halloween season, but it’s over. Now we have to look forward to the Christmas season. Although, halfway through October, most of the stores had Christmas decor taking the place of Halloween. Here in St. Louis, an All Christmas radio station came on there air about 3 weeks ago called “Holiday 101“.

Anyway, yesterday was Halloween. Since it was a Friday, a few of us went out to a local bar. I was dressed as Doc Brown, Josh made some crudely made suspenders at my house to be Marty McFly. We’re huge “Back to the Future” fans. Unfortunately, a camera phone in a dark bar takes some fuzzy pictures. 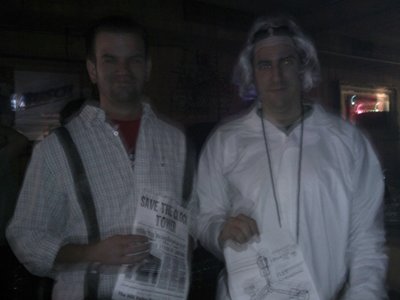 I turns out, people liked my costume. I ended up getting second place in the costume contest at Biele Street. I lost to a guy screwing a sheep and I beat out a sexy nurse. It’s not everyday that that happens. 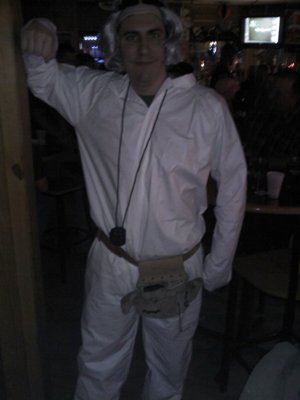 Anyway, 2nd place consisted of $25 dollars, a $15 gift certificate at Biele Street & a pint glass. I also think they took care of a lot of my drinks that night. I bought 3 rounds of beers which is equal to 9 beers. When I went to pay my tab it was only 9 bucks. That would usually be the cost of one round.

So, that was fun. Also, I had a big Halloween party last Saturday. I was Jay, as in Jay in Silent Bob. It was a good time. You can check out some of my party pics here and here.

Well, that about wraps it up. Don’t forget to watch the halloween edition of half-assed tv. It’s mostly a DIY episode. But, I got a few other things in there.

only 53 days until Christmas!