One of my favorite things to do is to go to an amusement park to ride all the crazy rides & roller coasters. In fact, I found a website that you can keep a database of all the rides you have rode on. Here’s my list.

My favorite park that I’ve been to, has to be the Magic Kingdom in Disney World. But, since I only get to go there about every 5 years, I settle for my “home” park. I’m lucky enough to have a Six Flags near me. It’s only about 30 minutes away. I’ve been going there for years. It’s where I rode my first roller coaster, the River King Mine Train. It’s also where I’ve rode my latest roller coaster, Evel Knievel. 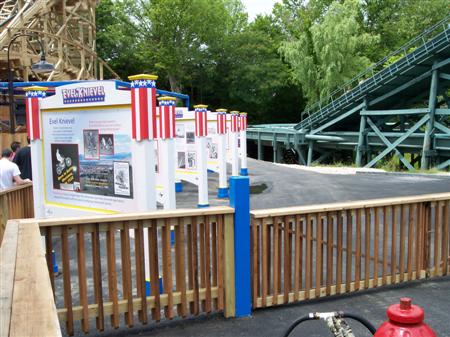 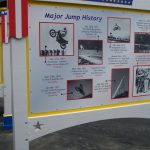 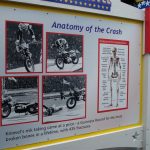 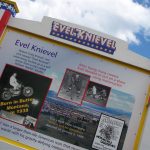 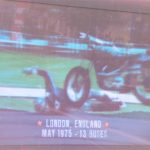 Evel Knievel is the newest coaster to come to Six Flags St. Louis. It opened about a month ago (June 30, 2008). And for some reason, they decided to name it after the legendary daredevil, Evel Knievel. No Superman, Batman or other comic book character ride, a real person. When’s the last time they named a ride after a real person? Oh yeah, last year when they opened Tony Hawk’s Big Spin.

While waiting in line to get on Evel Knievel (EK from now on), you get to check out all his successes & failures. There’s a bunch of signs showing pictures of the broken bones he’s had & his history. There’s also a few TV’s that show you the “death defying” motorcycle jumps. It seems that most of the jumps they show he ends up crashing. 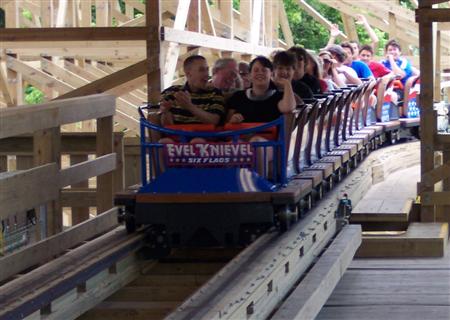 When you finally get through the line to the car, you are instructed to remove all loose articles. They even make you spit out your gum they see you chewing it. I’ve never had this happen on a ride before. Jeff got caught with gum. They said it was a choking hazard. So, they made him throw it out. I hid my gum under my tongue until we were on the ride, then I started chewing again. Yep, that’s right, I’m a rebel! Stick it to the man! 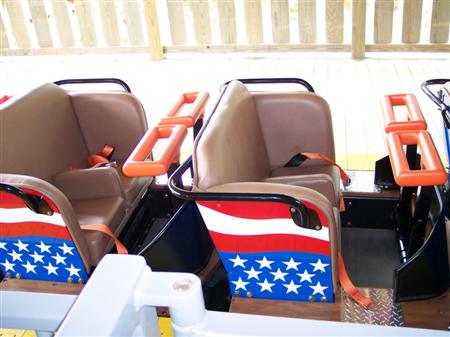 The seats are actually very comfy. It’s the softest roller coaster seat I’ve ever been in. Of course when I rode this, it was only open for 2 days prior, so I guess no one had wore an ass grove into the seat yet. The lap bar doesn’t restrain you to death like other rides either. 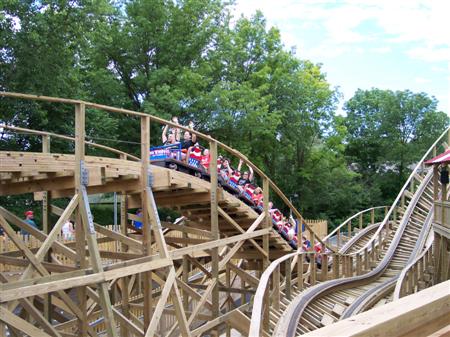 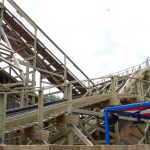 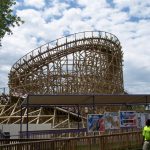 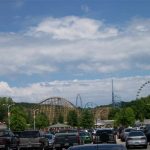 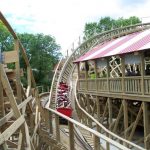 The ride itself is pretty good though. This is a very small wooden coaster. Compared to the other “woodies” we have at SF STL, it’s tiny. But, it’s very compact. This ride isn’t about hills, it’s about twists and turns. For a wooden coaster, this is very smooth. Probably the smoothest “woody” I’ve ever ridden on. The ride is fast and the turns are unexpected. I really enjoyed this ride. I believe they say it crosses itself 14 times total, which is some kind of record. I would say that this is very good for it’s type. My only complaint is that it’s too short. But, they had limited space where they put it.

So, if you’re ever in St. Louis, at Six Flags. Check this coaster out. It’s got my approval.