Like most people this week, I’ve got Batman Fever! I love Jay’s Batman Countdown over at The Sexy Armpit. I’m so excited that we have a new batman movie coming out on Friday, “The Dark Knight”. “Batman Begins” was definitely on my top 5 superhero movie list. The other day I heard about a dvd from the producers of “The Dark Knight” and “Batman Begins”. 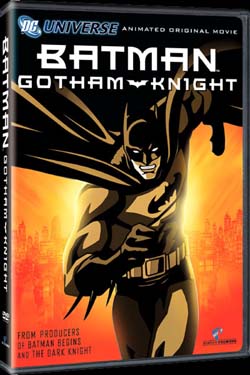 This Anime “movie” is suppose to bridge the gap between “Batman Begins” and the new “Dark Knight” movie. I checked it out tonight. It reminds me of what they did with AniMatrix, which was an animated straight to dvd release between Matrix Reloaded & Matrix Revolutions. This is almost exactly the same. It’s 6 shorts created by different japanese anime directors. But, the stories all sort of go together. It’s probably the darkest animated version of Batman I’ve seen. Very much along the same lines at the Spawn Animated series that was on HBO.

I don’t know if it’ll “bridge the gap” between the to movies, but for the most part it’s pretty good. You get to see Batman fight with Killer Croc & Deadshot. You also see how the island has become taken over by the Arkham Asylum’s escapees. It shows some flashbacks of Batman doing his training. And him just dealing with the various mob bosses in Gotham.

Anyway, you should definitely check this dvd out. It’s a great way to get even more pumped for “The Dark Knight”

One thought on “Gotham Knight”