Welcome to my 4th Annual Warped Tour Review. This review is for the 2008 Warped Tour in St. Louis, MO at Verizon Wireless UMB Bank Pavilion Riverport Center Amphitheater (or whatever the hell they call it now). As I’ve said in the past, I’ve been going to the warped tour pretty much every year since 1996.

We actually stuck around for the whole show this year. We didn’t leave because of heat exhaustion like last year. Although, Dave & Busters was fun, too. This year, since I have a new camera now, I was able to take a few video clips without killing the battery in my camera. Well, here we go:

Maybe I’m getting old or maybe I just didn’t like this band, but I found myself quoting Hewy Lewis’ line in Back to the Future: “I’m afraid you guys are just to darn loud. Next Please! Can we have the next band please?!”. Anyway, I think Josh agreed with me. He faked an interest by keeping in rhythm.

This band kind of reminded my of Less Than Jake. The lead singer sounded very similar to them. Of course they didn’t have the horns in the band. They were a pretty good pop-punky band. Nothing special, kinda generic. But, they weren’t annoying.

Walking through the millions of merch tents, we found a “Rock Band” tent. It was setup for the upcoming movie, “The Rocker”. Basically, anyone could come in and play the game “Rock Band”. There was pretty long lines to play, so I didn’t play. Besides I have Rock Band at home. It would have been cool if they had some demos of Rock Band 2 setup to play, but unfortunately, they just had Rock band 1.

This band totally reminded me of “Panic at the Disco” or “Fall Out Boy”. They were pretty decent. I thought the girl on keyboard was really cute. Kind of along the lines of the girls from “Dance Hall Crashers”. Anyway, they were one of the better bands of the day. Kind of a lame band name though. It’s a hard name to google.

I liked this band a lot. They reminded me of “H2O”. They were a good hardcore band. They even played a “Black Flag” cover of “Rise Above”. They were also the first of 3 bands to try to get the “worlds biggest circle pit” started. I don’t know if Guinness was there to make sure the record was legit or not. 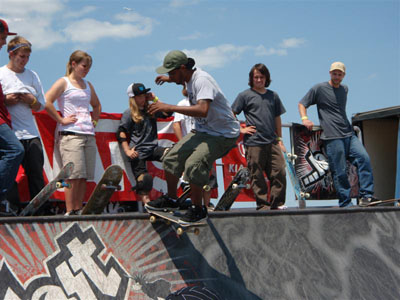 We watched some of the skaters for awhile. Okay, I’m not the greatest skateboarder in the word or anything. In fact, I can hardly skate. There’s not a single trick in my repertoire. But, amatuer or not, it’d be nice if these skaters could pull off a trick. We watched them for about 10-15 minutes. Most the time we just saw them fucking up a trick and falling. I think I saw about 2 successful tricks. But, I guess I’d fall too.

You know, after seeing this band, I really want to go to Japan. If every Japanese person is as happy and friendly as this band, then Japan must be a pretty nice place. This band looked like it was a bunch of little kids, but they are just short. They’re a fun little ska band. It was definitely nice to hear them. It really broke up all the monotony of the man emo bands.

I have one of MC Chris’ cds. It’s the popular one with “Fett’s Vette” on it. I’m a big fan of any nerdcore rock or rap. Bands like Nerf Herder & Weezer have made this nerdy genre popular. But, I must say MC Chris was great! It was kind of interesting seeing a guy with no backup band. There was just a laptop behind him playing the beats while he rapped on the mic. After you get past the high squeaky voice, you’ll start to dig it. At the end of the show instead of giving everyone a handshake or a high five, he held an hand up and said “acne no more”. Well, it was something like that, I can’t remember if that was exact phrase.

In fact, I just bought his new cd today, “MC Chris is Dead”. It is so awesome! I guess, I’m a nerdcore rap fan! I definitely recommend it.

Tons of teenage kids gathered for this band. I definitely didn’t see the appeal. I would have to say they had no rocking abilities about them. They were very good at sucking though. I’m sorry if I offended you, but I don’t like them. There’s only so much emo / whining that I can take. I mean even the fruit guys on the “fruit of the loom” commercials are now singing emo songs.

story of the year

You’ve got to support your local band. And “Story of the Year” is St. Louis natives. I must say they have definitely progressed from their debut album. They are now signed with Epitaph, which is the biggest punk label. Although, can you call it a punk label anymore? I mean, I like about 85% of their bands, but they don’t just have punk bands anymore.

SOTY played a great set, and you can see from the pictures that everyone at the show were at their stage. We got there about a half hour before they started and it was already more crowded than any other band’s set.

A couple years ago I saw “Against Me” and I said I really liked them a lot. This time, I just couldn’t get into them. Perhaps it was because I was excited to see “Reel Big Fish”. You see, RBF played immediately after Against Me’s set at a stage on the other side of the amphitheater. It’s a long walk. We left early. Josh wanted to stay and watch. Sorry…

I was excited to see “Reel Big Fish”. I haven’t seen them in about 11 years. I remember seeing them with Goldfinger in 1997 on Washington University’s campus. It was a great show. They didn’t disappoint this time either. The played a good mix of their catalog of music. Well, as good as a mix with only 30 minutes. They’re a funny band. They did an “Enter Sandman” cover and at the end they played “Rock you like a Hurricane”. Good times!

Lori’s young sister really loves this band. And apparently a lot of other tweeners do too. I think they’re hit is a pretty catchy little tune. But, really 15 years ago, this band would have been opening for Ace of Base. They’re a very light rock band. Kinda like Avril light.

While we were on our way out of the show, we were waiting for people at the bathroom. I saw there was a band getting ready to play. Sadly, there was only like 20 people at their stage. From the 3/4 of a song that I saw, I actually dug this band. If everyone else wasn’t ready to leave, I would have watch these guys. It was a good NYHC band.

Well, there you have it. Another Warped Tour comes and goes. I actually had a much better time this year than last year. Since it wasn’t so hot, you could actually enjoy the show instead of sweating your balls off.