Anyway, around that time, a friend of mine came in on the weekend with a demo tape. He said he went to an Urge show over the weekend, and they had a side project band called ‘Ulcer’. They were a four piece punk band. He let me borrow the tape, “Pre-Failure”. This started my love for the band, Ulcer. And soon one of their tracks from pre-failure went to be on one of the biggest local band compilations ever, Pointessential Volume 1. It was put out by the alterna-radio station, 105.7 the point. 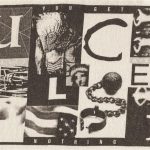 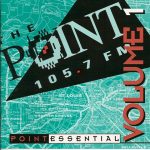 Along with Ulcer, this cd had many popular St. Louis artists at the time: The Urge, Mu330, Sinister Dane, Gravity Kills, Otto’s Revenge, etc… Here’s one of Ulcer’s earlier tracks, it was on their “pre-failure” tape, and it was on the Pointessential Volume 1 cd.

Here’s a quote of what Ulcer says the kind of band they are: “What the world needs is fast, hard, crap-rock with lyrics about every conceivable social ill perpetrated by low-payed office hacks (gofer boys, copier runners, etc)” And this is exactly what they are. I always think of them of a real soundtrack to the movie “Office Space”. 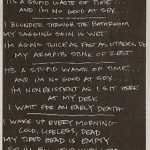 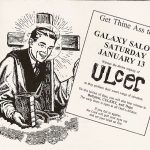 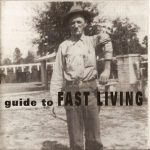 In 1996, I found this local compilation. It was full of the “edgier” bands at the time. The more rockin, punk, fast bands. It was called “The Guide to Fast Living”. One of the surprises on this was an Ulcer track. It was called “Hopeless”, which is the reason I became obsessed with this band. One of my favorite songs of all time. The lyrics are above, the song is right here:

When I heard this track, I had to find their cd. I remember looking everywhere for it. Vintage Vinyl, the top indie record store in St. Louis were out of them and didn’t know when they would get more in stock. I tried everywhere. I even looked at best buy of all places. Finally I found it at a small “CD Warehouse” in south county. This CD would be the soundtrack for my life… 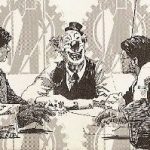 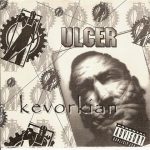 Kevorkian was the title of their first cd. It was exactly what I had hoped for. Songs about changing toner in the coping machine, to asking for a raise. It was and still is in my top 10 albums of all time. With lyrics like:

Collect your things punch your car and go home
We’ll find a chimp to do your job
What possessed you to ask for fair pay?
Besides this job, what have you got?

This copier makes bad copies
The pages are smeared and gray.
They yell and say put more toner in.
I do it cause it’s my job.


My Pencil Is Dull 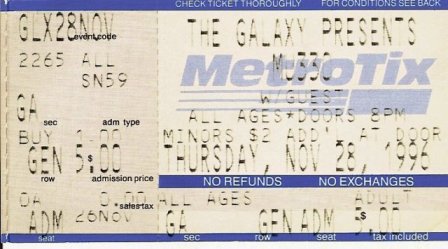 They didn’t blow up as a huge band or anything. But, they did open for a few bands, like Gwar and Clutch. I went to see them for the first time on Thanksgiving 1996 with Mu330. It’s was a great show. I remember Jeff finishing a bottle of whiskey, and for some reason duct-taping the empty bottle to his drums. Here’s a few more tracks from “Kevorkian”…

I kept “Kevorkian” in my regular cd rotation. But, it wasn’t until 5 years later that me and my friend Josh went to see Ulcer for the 2nd time. They didn’t seem to play that many shows, and when I found out about them playing, I usually had other plans. So, it wasn’t until St. Patricks Day, 2001 that we saw them again. And, their show had changed…. 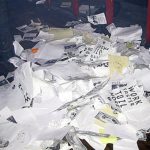 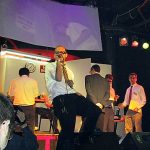 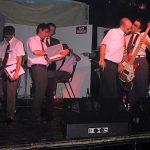 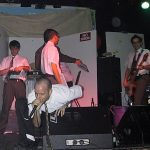 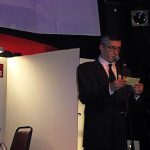 The whole show was a “Punk Rock Opera” Stage show. It turned into a show as fun as a Gwar show. The show started out with a boss welcoming you to the meeting for “Ulcer Incorporated”. Oh, did I mention, they seemed to have changed their name to “Ulcer Inc”. The boss explained some stuff with a powerpoint presentation. After there, we see the story of “Dick Marcinko”. His wife hates him, his boss hates him. You basically see Office drones putting stuff on his desk, and “working” while the band plays. 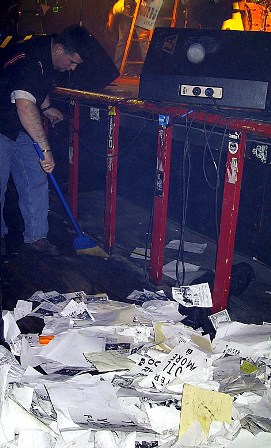 But, unlike a gwar show, you didn’t get covered with “blood” & “mucus”. You got covered with Office Documents, Quarterly Reports, Graphs, etc. This show was amazing! They played a new song about Courtney love called “Shut your Hole”. We talked to Matt, the lead singer, after the show. 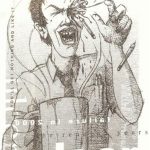 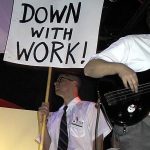 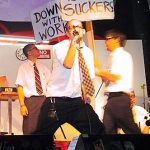 We bought a couple shirts from him. We asked about the new show format. He said it’s pretty new, but it’s a lot of work. He said they were planning on releasing a video and a new cd. 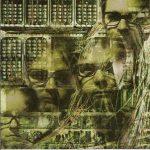 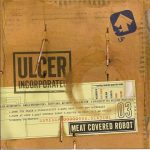 It wasn’t until 2003 that they came out with their 2nd cd, “Meat Covered Robot”. It was a great cd, I love it, but of course, like most bands, I’m a fan of their first cd better. Although, this has my favorite track by Ulcer.. or Ulcer Incorporated as they’re now known as. That track would be “More Beer, Right Now”


Down the Drain
Productivity
I am Stupid

If you remember, I actually put “More Beer, Right Now” as the closing credits on Half-Assed TV, episode 1. 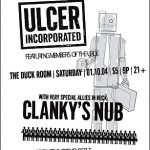 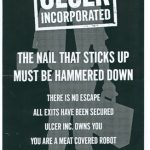 It wasn’t until January 2004 that we saw them for the 3rd and last time that I’ve got a chance to see them. This time the show still had the papers everywhere and the office drones all over the stage. But, half-way through the show, you see a scientist introduce a robot to the boss. The work gets done faster, they start adding more robots and firing the employees. At the end of the show, pretty much everyone dies. The opening band, Clanky’s Nub, were dressed up as the robots at the show I saw. 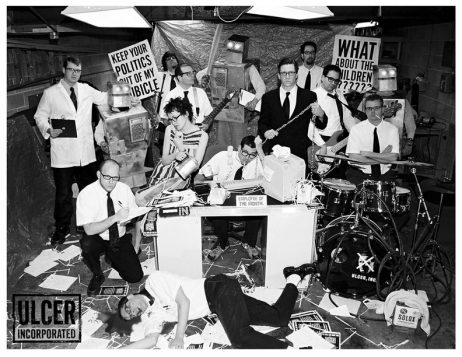 Above is the last promo photo that I know of. (click on it to enlarge, just like the smaller thumbnails). Anyway, I don’t think Ulcer has played a show in about 2 years. I know the lead singer is now in the band LucaBrasi. We’ll see if they ever do another show or if their technically still together. But, it was great while it lasted.

They have a facebook page here. But, I don’t think it’s updated that often.

So, that’s my tribute to my favorite St. Louis band, Ulcer.