Sometimes you’ll eat anything when you’ve been drinking 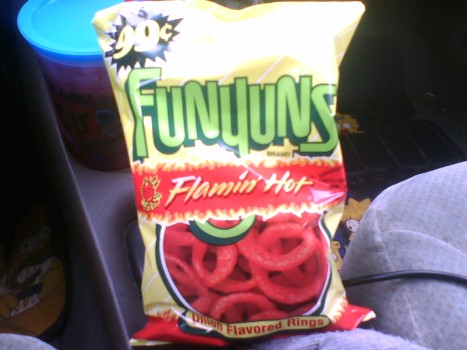 On Saturday, I went out drinking. (Big surprise there) Anyway, in the morning on my way home, I decided to stop at the Local QuikTrip to pick up a “Rooster Booster Lite” Energy drink to help ease the hang-over I was bound to get sooner or later. Thats when I noticed these babies on the shelf: Flaming Hot Funyuns! 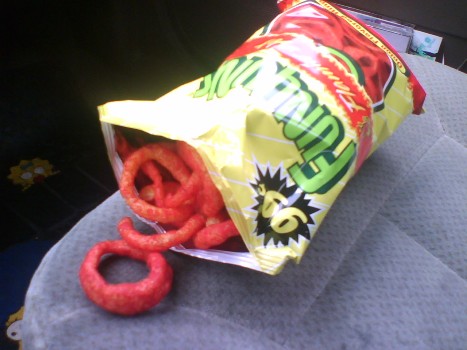 I’m not new to Funyuns or anything. I’ve had them before. They’re a great non-greasy hand substitute to onion rings. Although, I must say, my favorite onion rings are from White Castle. Anyway, these were different, they carried the famous “flaming hot” flavor. I’ve never seen these before, and although there was no “NEW” banner branded on the top of the bag, they were new to me. I’m a fan of the “flaming hot” flavors from Frito Lay. My favorite would have to be the flaming hot cheetos. These flaming hot funyuns look exactly like all the other flaming hot products. They’re covered with the mystery red powder. These things taste exactly like I thought they would taste. They taste like hot funyuns. I thought they were good, but about an hour later they didn’t seem to agree with my stomach. It may have had something to do with the beer. I didn’t throw up, but it felt like the flaming hot cartoon devil was living in my stomach poking me with his flaming pitchfork.

In closing this review, I would say these taste great, but they aren’t really a great hang-over cure. Stick to the Grand Slam at Dennys.