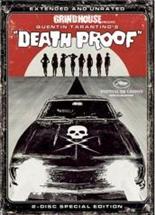 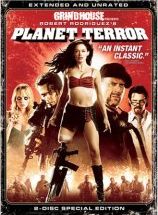 Well, the geniuses in hollywood did it again. I mean that sarcastically by the way. Today, Deathproof comes out on DVD. In a month Planet Terror comes out to DVD. The problem is, they’re splitting up, in my opinion, the best movie that came out this spring, GrindHouse!

GrindHouse was meant to be a double feature movie. All with fake trailers & advertisements before & in between the movies. It felt like you were watching a late night double feature in the 70s. The added scratches & skipping film reels added to the authenticity. I saw it on the first weekend it was out in the theaters. I loved this movie, both movies actually. But, after a couple weeks in the theater, it didn’t do too well, so they split the Grindhouse movie into 2 separate movies. And they’re doing the same thing with the DVD. The sad thing is, the great fake trailers won’t be found on either DVD.

So, the question is, should I buy both movies, or hope that they finally come to their senses and release a dvd with both movies like it was intended? 🙁

3 Reply to “Grindhouse: split for DVD”