Well, it’s time for my 3rd annual review of the Warped Tour. This is the 12th year I’ve been to the Warped tour. So, you can say I’m kind of a fan of the genre of music they offer. I’m still going to have to say that the one I went to in 1996 was my favorite. It was the first time I saw my favorite band, NOFX. Also playing that year was Unwritten Law, Pennywise, Fishbone, Goldfinger, Guttermouth, The Deftones, Rocket From the Crypt. 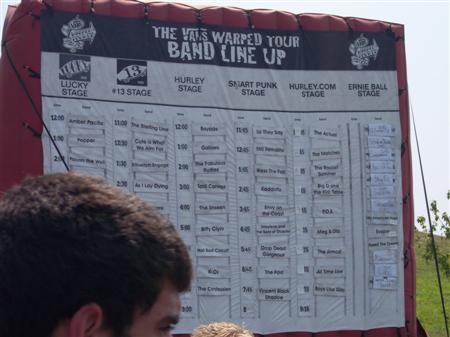 Here’s the lineup of the bands. Yeah, someone’s head got in the way, dammit! Anyway, there was 2 other stages that weren’t listed their huge inflatable schedule. This year I wasn’t going to originally go. My friends Josh & Lori talked me into going because they were taking Lori’s 12 year old sister and her friend. There weren’t that many bands that I really wanted to see this year. The bands I wanted to see were The Matches, Bad Religion, The Unseen, & Sum 41. All of those bands I’ve seen numerous times before, except for Sum 41. I never saw Sum 41, so I thought it’d be kind of neat to see them. 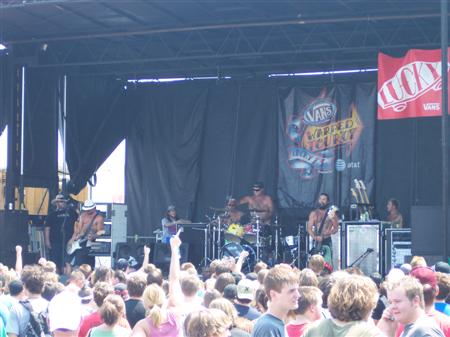 The first band I saw was Pepper. Josh commented that they looked pretty grungy. It appeared they haven’t showered in a few weeks. We stuck around to see a few songs. They weren’t bad, but it was something like 105 degrees outside. Plus, the humidity in St. Louis is horrible, especially in August. I like their hit song, “No Control”. But, they’re other stuff, I can take it or leave it. 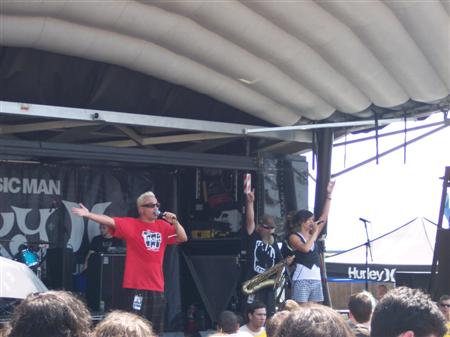 The next band we checked out was The Fabulous Rudies. They were a fun little ska band. I think it’s okay to like ska again. haha.. During the late 90s when it became popular, it was hell going to a ska show. Jocko assholes were knocking over people with their fists. While all the rude boys & girls were just trying to skank. Now, its back to the underground days again. I like to skank, its the one dance I can actually do. Of course, you look ridiculous doing it at a wedding reception. Anyway, I enjoyed this band. They were pretty good. They did have a song about Richard Gere that was kinda strange. But, I liked ’em. 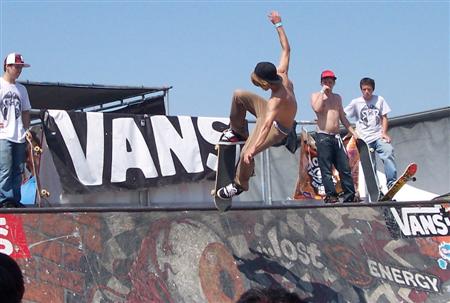 While downing bottles of water or powerade, we decided to watch a little skateboarding. It’s always fun. I still am upset that they don’t have as many ramps as they once did. They use to have a bmx show, motocross show, & skateboarders. Now it’s a tiny little pipe, that a few local skaters get to skate on. Later, there was a bmx guy on the half pipe. What was most fun was watching the 10 year olds skate. They were really good, and I guess since they’re short, it’s easier for them to do tricks.

I could never skate. I always wanted to. But, I couldn’t get the concept of an ollie. I just don’t have the coordination I guess. Most people’s skateboards were all scratched up and abused. My board looks like it’s in mint condition. I still have an old hookups board I bought about 10 years ago, that I rode about 5 times. I think I was more into the skateboard type music: The punk/hc/ska scene. 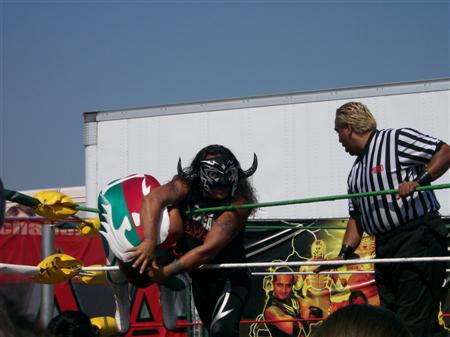 While watching the skateboarders I glanced over to see a ring. They actually had Mexican Wrestling. It was so bizarre. There was an announcer that spoke in spanish. If you heard his announcing style, you would of thought it was the most exciting thing ever. I actually found it rather boring. Their goofy outfits were kind of cool, but I just couldn’t get into it. I guess the heat just killed me. 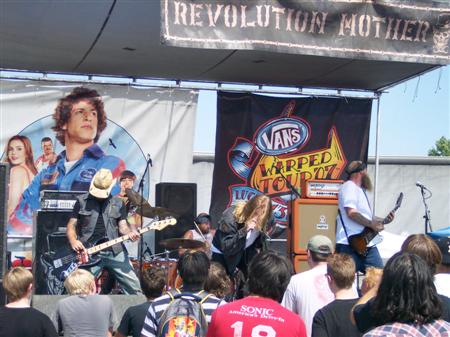 The next band we saw was Revolution Mother. At least, I think that’s what the band name was. This band was pretty bad. I’m sure they have lots of dedicated fans. But, to me, they sounded like crap. I just can’t get into a band that has to scream every note. There were lots of bands like that, and most of them I just past right up. I guess I just don’t get it. 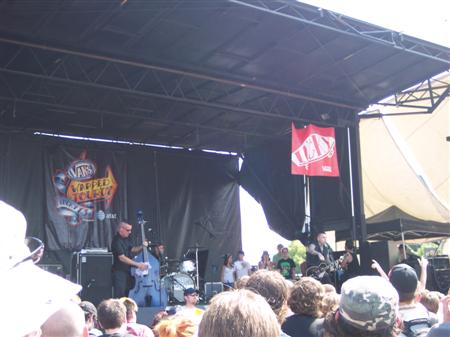 I look at my watch and thought, oh shit!, I’m missing Tiger Army! They’re actually a band I really like, but have never gotten a chance to see. They’ve been at a couple other warped tours that I’ve been too, but it always seems that they play at 12:30, before I get to the show. Anyway, I got there in time to see about 2 1/2 songs. They were great. They’ve just got a really good sound. The rockobillly/psychobilly sound is close to a Reverend Horton Heat sound, but with a horror / misfits twist. They somehow spawned out of the band AFI. 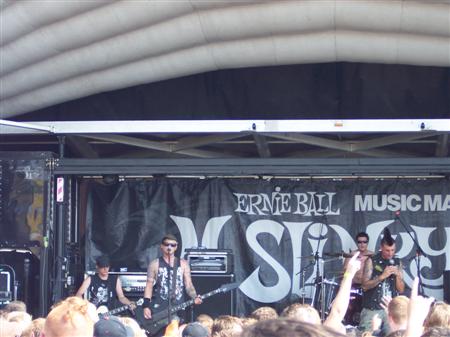 We walked over to watch The Unseen. I’m a fan of there music. We got over there to hear their cover of Paint it Black by the Rolling Stones. We probably caught about 5 of their songs. They played my favorite song, “Scream Out”. They’re basically an good old punk band. Yeah, they do a lot of screaming, but it’s melodic. So, I can dig it. 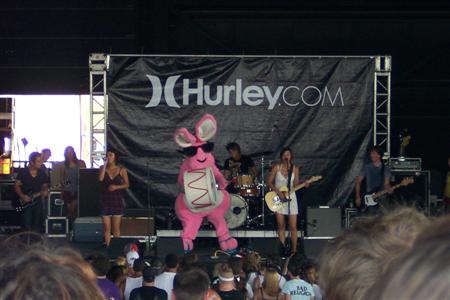 Since it was so freakin hot, we sat in the only shady stage to watch a band that none of us ever heard of. They were called Meg and Dia. They actually weren’t bad. They were a band with 2 girls, kinda reminded me of the Dance Hall Crashers. They were pretty mellow, they even played a cover of Blind Melon’s hit, “No Rain”. The energizer bunny joined them on stage. The poor guy or girl who was in the costume must of been frying.

About this time, we caught up with the 2 kiddies. They looked about dead. They said they didn’t want to stick around to see Red Jumpsuit Apperatus & Hawthorne Heights (damn emo kids!), which is who they were waiting for. It was going to be another 4 hours for them to play. So we decided to leave. I was happy, because I had enough of the blazing heat. 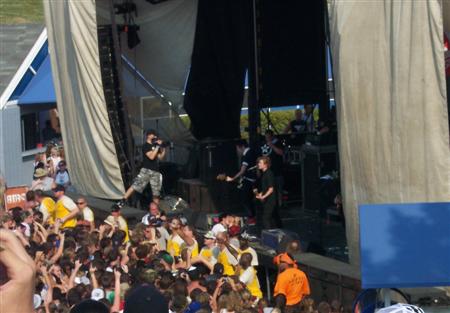 On the way out, we caught a song or 2 from Sum 41. I didn’t think they were too bad. Josh said they sounded like shit. But, I would have liked to stay a little longer to check out their set. Of course, everyone and their mother was over at that stage. It was packed. I’d say about 60% of the people that came to the warped tour were there.

So we left… and we went to my favorite place, Dave & Busters! 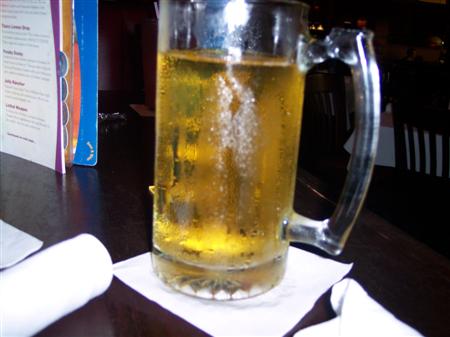 So, we ate some appetizers, and got some much needed beer! For those that don’t know, Dave & Busters is kind of like a Chuck E Cheese, for Adults. You get a “power card” which is basically a credit card. You buy a bunch of credits to put on the card. Then, every game in the place has little card swipes to play. 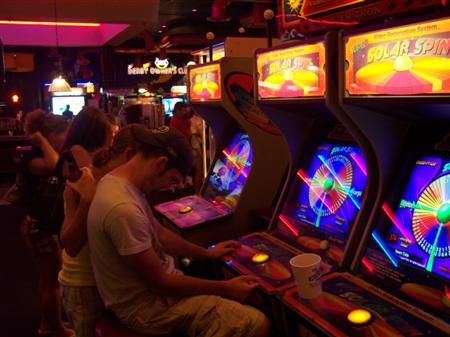 They have video games there. Tons of them. But, what we usually try to play is the ticket winning games. 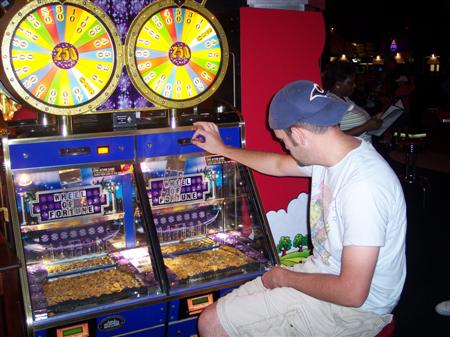 The ones that seem to give us the most tickets are the ones where you drop a coin in, and you try to push all the other coins off the ledge. For each coin that falls off the ledge you get 8 tickets. 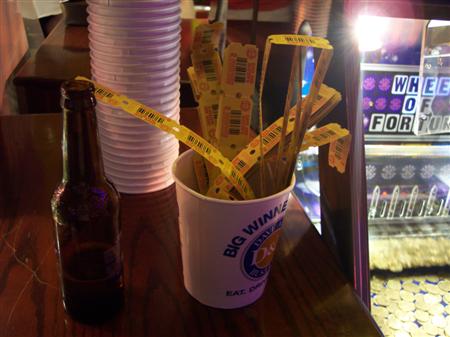 I can’t remember how many tickets I ended up with. But, I think it was something like 950. They have a huge prize shop, where you get to pick out tons of prizes. This time, I got myself a dave & busters mug & some sour candy. I had tickets leftover, but I couldn’t decide what else to get.

So, there’ you have it. My warped tour turned into a dave & busters trip. It was a fun day. I’m glad we got to end the day in a nice air-conditioned place.