A few weekends ago, I was still 29 years old. You see, my birthday was on a Monday, which meant I really couldn’t have that much fun on my birthday. So, on the Saturday before my birthday, we planned on getting a bunch of people together to go out somewhere.

Saturday started normal. Angie and I got up late, and we decided to get some groceries and some other stuff from Wal-Mart. So, we went to the store, picked up a few things for lunch. We headed back to my house and I opened the door…. 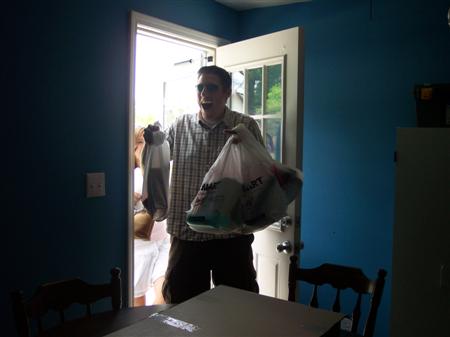 Holy Crap, that scared the shit out of me! Who were all these people in my house? Good thing I didn’t have a gun, I could have started shooting people before I realized they were there to celebrate my 30th birthday. You see, Angie had secretly called up all the friends and family for the whole thing. 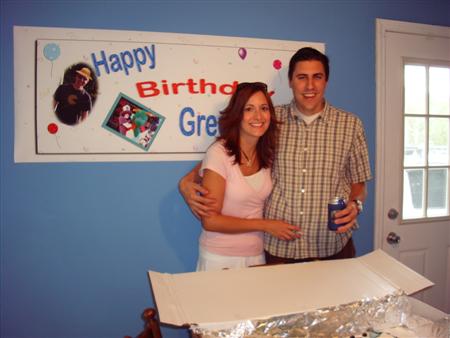 It was a small gathering, which is what I prefer. Since it was just a few close friends, my girlfriend, and my family, I didn’t have to worry about entertaining some strangers. Angie did a great job putting the whole surprise party together. I thought there wasn’t going to be any party or anything. But, my sweet girlfriend, Angie, came through with an awesome party!

Back Story – You see, all week Angie was telling me she was making me a cake. Owen, her son, had told her that she should make a ‘Batman’ cake for me. Angie even told me to look online for some good pictures of Batman. So, I found a couple pictures, sent them to her. So, she got to my house on Friday, with a big huge box with the cake in it. She told me not to peek in the box, because she was going to bring the cake with us on Sunday to my parents house. That is where I would get to see her cake decorating skills. So, keeping the surprise, I didn’t peek in the box.

Well, after this ‘surprise party’ came up, she said I could now check out the ‘Batman’ Cake. 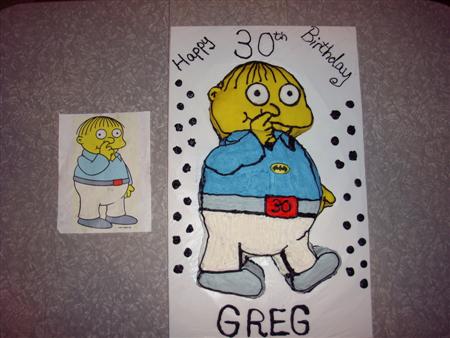 Wha!?!?? She tricked me! She made me a Ralph Cake. Ralph is my favorite character from the Simpsons. She put a little batman logo on his shirt to make him ‘batman-y’. It was funny, because the whole time, I was thinking, why would I want a Batman cake? I like batman, but the Simpsons or He-Man are more my forte. 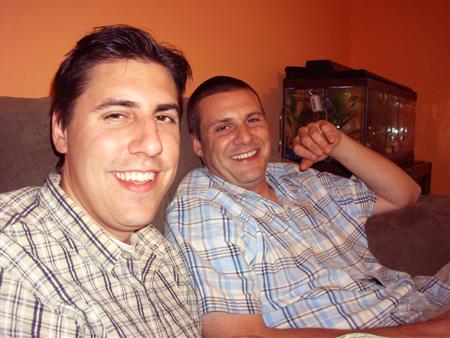 So, it appeared we weren’t going to eat the cheese & crackers that we got from Wal-Mart. It was a full on BBQ, complete with my favorite kind of Potato Salad. Oh, and lets not forget, Beer! 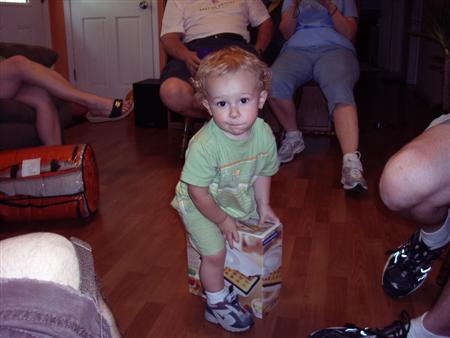 So, everyone got me some presents. It was very nice. Jeff & Logan got me a few collapsable outdoor chairs. Josh got me a Drill, a huge Keg bucket, shirt that says “It’s all fun and games until someone loses a weiner” (it’s a picture of 3 stick figures around a campfire, one lost his weiner off his stick into the fire). Jeremy & Robin got me some cash. Mom & Dad got me some cash too. (Cash is King!). And Angie & Owen got me a waffle iron, which Logan seemed to love riding on for some strange reason. 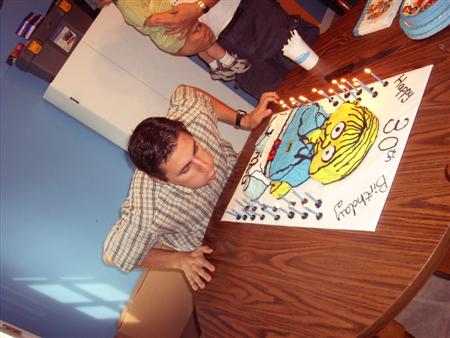 Do you know how hard it is to blow out 30 candles? I mean, it’d be a lot easier if they were close together in the middle. But, Angie sperated them out, making it hard for me. Good thing I don’t smoke, I would of passed out, I suppose. 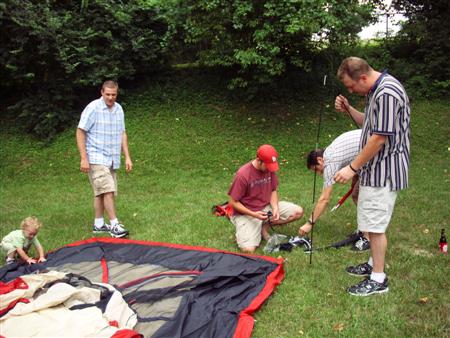 I had just bought a tent at the store, and I wanted to do a ‘trial run’ of putting the tent up. You see the following week we were going to go on a float trip. So, I didn’t want to go down there with a new tent, not knowing how to put it up. So, everyone ‘pitched’ in to help. Of course, Jeff just kept poking me in the ass with the tent poles. 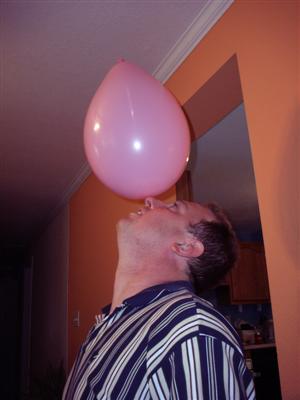 It was getting later, and seeing Tom balance balloons on his nose got a little boring. So, we had to decide what we were going to do. We usually goto Dave and Busters on my birthday, which is kind of like a Chuck-E-Cheese for Adults. But, I’ve done that so many times. What were we going to do this year. It was my 30th, it had to be something cool… 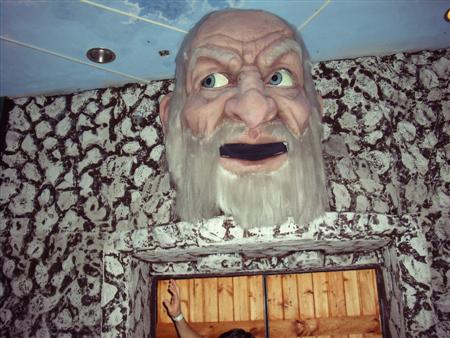 Laser Tag!! Yes, we crossed the river over into Illinois, to play laser tag at a place called ‘The Edge’. They’re home of the ‘Worlds Largest Laser Tag Arena’ Okay this was the first time I had ever been to laser tag. And, we had to dodge a bunch of 12 year olds, but this was so much fun. This head above is right above the entrance to the Laser Tag Arena. 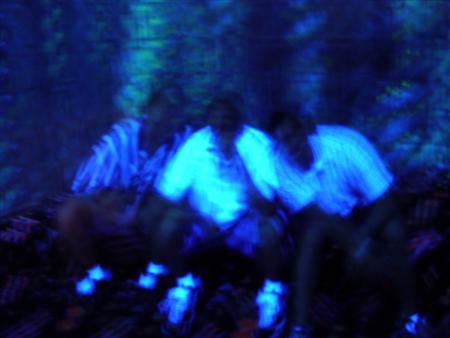 We would have taken some pictures inside the arena, but this is what the pictures would have looked like. And…. 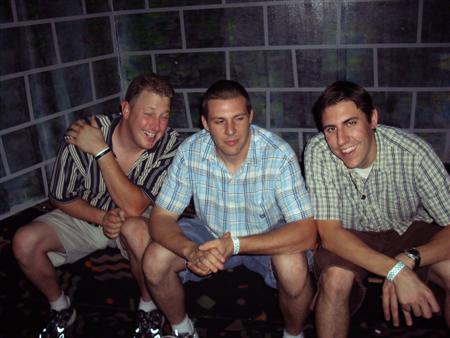 This is what it looked like using a flash on the camera. So, unfortunately, we couldn’t get any great pictures inside. But, goto the edge’s website to see a little inside. I can’t wait to go back. I never got a highscore. I think out of the 5 games we played the highest place I got was 15th place.

The rules were simple. Some people had blinking red lights, some had blue lights. The red team had to shoot the blue team. But, there’s tons of nooks & crannies to hide in. It was a blast, I can’t wait to go back. 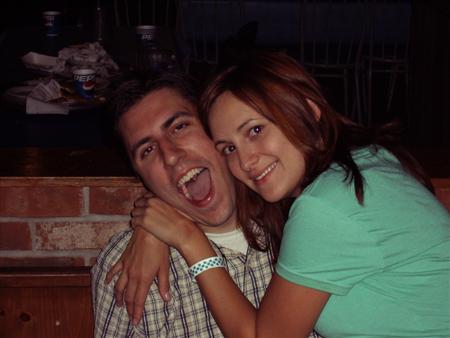 So, all in all, I had a really good birthday. Turning 30 was a little weird. I thought I’d be a little upset about not being in my twenties anymore. But, I always got my older brother, Jeff, to make fun of, because he’ll be turning 40 long before I will. HAHAHA!!