Back in the Early 80s, Topps (the baseball card company) came up with an new kind of trading card. It was a Parody card, called Wacky Packages. They basically took a product like Oreos and made it into a silly product like Maggot-Os. They were usually gross products. During this time, the Cabbage Patch Dolls became popular. One of the “Wacky Packages” artists did a parody of the Cabbage Patch Kids called Garbage Pail Kids.

Soon after that Card was made, they created a spinoff. A whole line of products dedicated to the Garbage Pail Kids. Today, we look at my collection, and what made them so great.

And, no, I will not be talking about the “Garbage Pail Kids Movie”. I for one, thought it was one of the worst movies ever. Angie, on the otherhand, puts it up there as one of her favorite movies. It’s one of the few movies on rottentomatoes.com that has a 0% rating.

So, I looked through my cards last night, and for the most part, I found that the cards are in 3 different categories: Puke, Snot, or Body Parts. Lets have a look:
(click on the thumbnails below to see a the larger picture)

So, there’s the “Puke” category. You can see it was a common theme. Of course, it’s not your normal vomit, you’ll always see some fishbones or other random stuff floating in it. I can see why they barfed, look at what they were eating.

Garbage Pail Kids at the time, were 25 cents a pack. They came with 5 cards, and a stick of gum. I remember, I couldn’t find them in any of the stores. But, this was the most popular item in 3rd Grade. A friend of mine at school said a convenient store by his house sold them. So, I would give him tons of money, well, what little money I had, for my friend, Clinton, to buy me packs of GPKs!

Here’s the next category….

The second biggest thing I saw was “snot”. There were many cards with runny noses, but these were some with the most extreme mucus.

Besides just the cards, GPKs started to show up everywhere. They ended up having a movie, like I said earlier, and a cartoon. They also put out many other products like: Larger stickers, Toys, Candy, Etc.. The marketing department tried to put out as much crap as they could while they were popular.

time for the 3rd category:

I found that a lot of my cards had missing body parts. It was usually a head that came off, but every once in awhile there’d be a foot that came off. It was a pretty common theme.

These cards were actually stickers as well as cards. One time in like 5th or 6th grade, after the GPKs had gone away, I decided to stick a bunch of the stickers on my school folders. I’m kinda pissed now that I did that, because I wasted them. I mean, there’s probably about 30 or so cards that I don’t have anymore because of my foolishness. Oh well.

Another thing about the Garbage pail kids was to save money in the art department all Garbage Pail Kids had a twin. Or, basically, it was the same card with a different ‘clever’ name. I’m sure after awhile, it got hard trying to come up with a rhyming name for each card, twice. 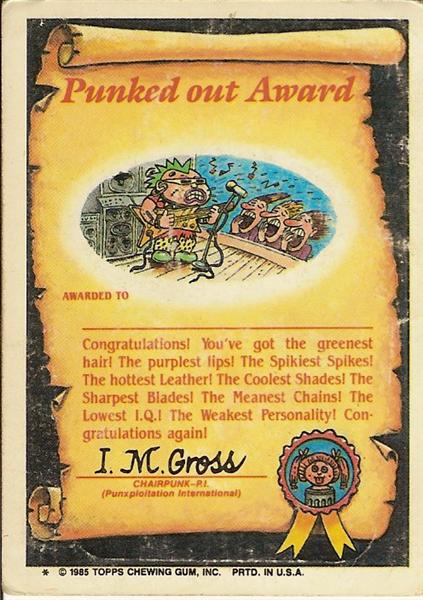 On the back of every GPK was something special. Now, I’ll show you what cool things you got on the back. Above is from the first series, a ‘award’ type thingy.

With the second series, we got a ‘file’ that tells a description of a couple of the GPKs. They explain a lot of unanswered questions. I mean, when you’re 8 years old, you’ve got to know these things.

Then came, the infamous ‘Wanted Posters’. They were on the back of many cards back in the 3rd & 4th series. I had collected most of my cards during that time. You can see that I filled in a bunch of these cards, which is another thing, I’m upset about. Oh Well..

On the back of cards that didn’t have a comic, wanted poster, checklist, etc… they would have a puzzle piece. you would put all your cards together to form a big puzzle version of a GPK.

Towards the middle of the original garbage pail run, they came up with “would we lie to you” facts on the back of their cards. They were kind of a rip off of Ripleys Believe it or Not. And, most of the facts were just goofs.

The finally thing I remember on the back of GPKs were Comics, along with a tiny little flipbook. You would have to collect them all to flip it correctly. I didn’t have all the flipbook backs, but the animation still looks pretty good. The one above is Bony Tony turning into Adam Bomb. hahha.. it’s funny, I remember some of the names.

Here’s one with Snotty Suzy, sneezing and getting hit on the head with a huge, ummm… booger? Well, I guess the writers had to put themselves in the mind of a 3rd grader.

Here’s the last flipbook I had. This one just has a baby puking up way too much barf. It’s pretty crazy.

Anyway, so there you have it. My huge look at Garbage Pail Kids. Looking at these cards really made me think that I was kind of a demented kid. But, then I thought about it, every kid had these things. So, I guess we’re all a little demented.